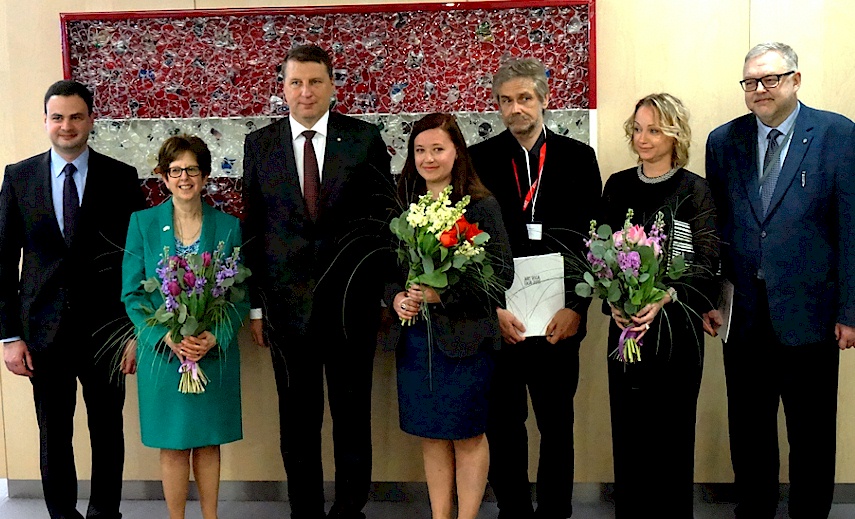 Storied symbols of patriotism, the artwork Latvian Flag, challenges Latvians about their past, present, and future.

A dominant landmark on the Riga cityscape, the National Library of Latvia (NLL), known also as the Castle of Light, is among the greatest cultural projects of the 21st century in Latvia.
The month of May saw Latvia’s President Raimonds Vejonis, Georgia’s Ambassador to Latvia Teimuraz Janjalia, and US Ambassador to Latvia Nancy Bikoff Pettit unveil the library’s newest artwork Latvian Flag (Latvijas karogs) by David Datuna.
Datuna, an Georgian-born American artist presently living in New York, gifted the work to Latvia on the occasion of the 97th anniversary of its independence.
It will remain on permanent display in the Humanities and Social Sciences Reading Room of the NLL on level two.
Latvian Flag is based on the artist’s Viewpoint of Millions signature technique. It uses positive and negative optical lenses placed over a collage of images depicting important events, places, and people in Latvia’s history and struggle for national freedom.
The work explores, as other artworks in the series have, the sources and meaning of cultural identity. Latvian Flag features a mixed palette of imagines ranging from photography, cut out newspaper articles, and magazine clippings.
Before becoming an artist, Datuna was employed in an eyeglass store. His mixed media pieces often depict flags — storied symbols of patriotism. Latvian Flag challenges Latvians about their past, present, and future.
“Today we are receiving a very special gift. We exhibit a work of art where our friend honours us, our country, and one of our national symbols — the flag,” said President Vejonis.
In Nov. 2015, Datuna presented the work to Vejonis at the opening event of the ART RIGA International Art Festival. Following an initiative of the President’s Chancellery, the artwork was entrusted to the NLL.
“The flag is the national symbol of every nation — and our own red-white-red flag embodies independence and the determination to be free and to dare. This work of art calls for each of us to look more closely, not only at ourselves and our country, but also its history. It symbolises Latvian history and through these lenses, helps us better see our country as well as the people and events that have helped to build it,” said Vejonis.
The president also pointed out that this gift allows us to look beyond everyday life and to see ourselves in the context of the world, and also allows us to express gratitude for the friendship and appreciation of friends. The president voiced his pleasure that the flag was gifted to Latvia.
“We are pleased that world-renowned foreign artists are promoting and honouring Latvian history, our culture, and national symbols. This gift is a unique example, affirming that artistic expression transcends borders and brings to gether countries and societies, as well as cultures. The National Library of Latvia will make sure that everyone becomes aware of this fact, both visitors to the library and people all over the world!” said Andris Vilks, director of the NLL.
Ambassador Pettit sees Datuna’s current installation as a symbol of creative expression and freedom.
“It’s thrilling to see this beautiful installation by David Datuna — a symbol of our two countries’ special partnership — on display today. As many of you already know, Mr. Datuna’s work is a wonderful example of the artistic and innovative spirit that drives the United States,” she said.
“As someone who grew up in Soviet Georgia before moving to the United States, Mr. Datuna understands the need to fight against oppression and to protect democratic values. The United States has never wavered in its support for the Latvian people, and today we are proud to stand shoulder to shoulder with Latvia to honour and defend these values which we both hold dear. Our shared commitment to regional security, open trade, and human rights serve as a foundation to help ensure a Europe whole, free, and at peace,” said Pettit.
Datuna has gained wide recognition with his Viewpoints of Millions series of artworks, which explores symbols of national identity and their meanings.
“It was a real honour to work with the Latvian Flag. It was an interesting learning process, which has allowed me to learn more about your wonderful country and its people as well as your efforts to move forward and to be free, independent. I am grateful to the Latvian people that they have allowed me to touch their souls and thus become a part of your country. I express my deep gratitude to the president and the director of the Library personally,” said Datuna in his written greeting to the participants of the event. The artist had originally intended to be present at the unveiling.
Latvian Flag has been implemented with the involvement of Galina Maksimova and Dags Vidulejs, organisers of the ART RIGA International Art Festival.