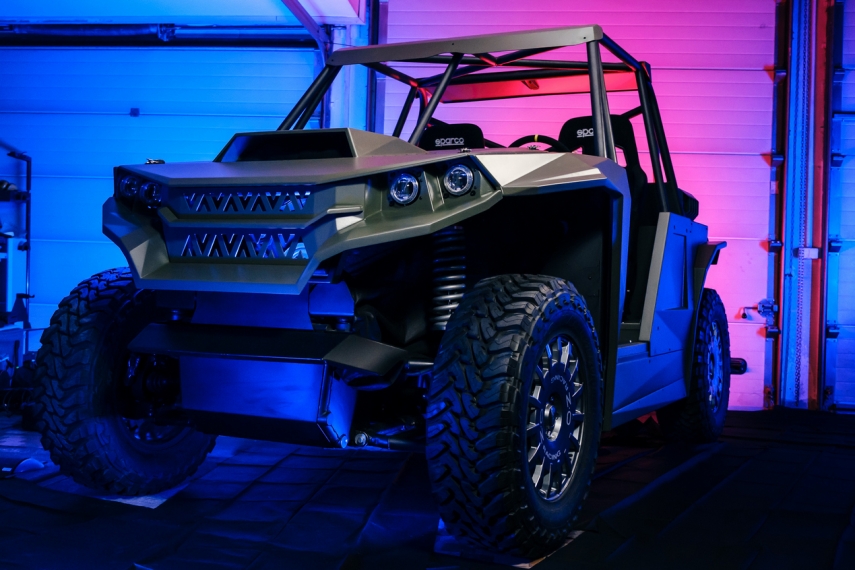 It seems that we have less and less yet „un-invented bicycles“ remaining in the age of rapidly developing technologies, therefore, in order to offer the world something original, one has to think very hard. Still, if inventing innovations we draw upon real needs, we indeed may discover perspective trends for development of technologies thinks Darius Antanaitis, a reserve Major of the Lithuanian Army, participant of military missions in Afghanistan and Iraq who, with a team of like-minded companions, is designing a new generation side-by-side buggy “Krampus”. It can change logistics and transportation beyond recognition in such areas as mining, rescue work and environmental protection. The Baltic Times Magazine talked with D. Antanaitis about how an idea of such buggy was born and how it can serve people.

You are an officer, who took part in international military missions. What served as impetus for you to go in for development of technologies and innovations?

Probably my experience in military missions in Afghanistan and Iraq determined such a choice. I believe that the most successful innovations are born from practical needs, when we seek to solve very concrete problems or arising challenges and a battle field has many of them. One of them – supplies with necessary stock in dangerous locations. Most often such a task is given to man-operated military transport convoys, which are subject to threats of ambush and attacks. Yet another challenge – patrolling near enemy lines. This is also very dangerous, as military units performing such tasks are often in the enemy’s gun sights.

When you see this from a short distance you naturally start to have questions about what could ease a soldier’s everyday life and reduce the risk of becoming a human victim and risk of material damages, and would still allow him to perform necessary tasks or manoeuvres. That’s how the idea was born about a fast, maneuverable and silently-running buggy, which has an autonomous driving possibility.

The idea is one thing, however its implementation is another thing. How did you commit to this?

After service in the army, I had persistent thoughts about using autonomous driving possibilities in a smart off-road vehicle. It took several years until this idea got settled in my head and became “ripe”. I understood that such a vehicle could be useful not only in military applications but also in many other areas. When observing how certain work is being done in mining, environmental protection, state border guard service and other areas, I noticed that very often money is being wasted where it shouldn’t be. A human is performing work, which can be done by mechanisms.

After more research, it became apparent that the global market does not offer the solutions, which would meet my vision. It means that there is an unmet need. I shared my idea with a few like-minded people with the necessary engineering and scientific knowledge and we decided to move from words to deeds.

How did it go? Probably not everything was that easy?

Of course, when you start creating something that does not yet exist, you do not have the possibility of looking at specimens made by others or following someone else’s path, then you face a lot of challenges. However, these are the challenges which motivate us the most. For every arising problem we have to independently find solutions. We ourselves design, produce, test, correct and we adapted to our concept many components and systems of the buggy. We have learned how to overcome obstacles, and not to stick to a sole possible solution to a problem, we have learned not to restrain ourselves by adhering to some fixed norms. I am very happy that we have created a team who is able to do this, who is not afraid of challenges and has the motivation to overcome those challenges.

You have said that the buggy “Krampus” will have autonomous driving possibility. Does this mean that it will not need a driver at all?

Yes, autonomous driving is one of the most important advantages of the “Krampus” buggy, as until now no off-read vehicle in the world can do this effectively. If unmanned drones or floating systems do not face big navigation challenges, a land off-road vehicle is constantly facing them, therefore, it is not easy to design such a machine. The vehicle itself has to evaluate how to overcome or bypass pits or objects, which have not been marked in maps, plants, animals, people and other obstacles, which may suddenly emerge in its way. Our buggy will be able to do this, therefore, we will be able to send it to locations which are dangerous to a human – for instance mountainous locations, locations with complicated relief or polluted areas or use it for reconnaissance of territories, state border patrol etc.

The buggy will have an option of remote control as well as the possibility of reaching a specified destination on its own. For that purpose, “Krampus” will draw on smart systems, which allow making the best decisions while on the road. Furthermore, while using autonomous driving mode, the vehicle will be able to go to areas without GPS signal reception. In such cases, the vehicle will draw on its own artificial intelligence and will be looking for the best way to reach its destination. Of course, the buggy can be used as any ordinary vehicle with a driver sitting at its wheel.

It sounds intriguing indeed. Will the new buggy have even more advantages?

No less important is the buggy’s hybrid electric-diesel power-train. Similar solutions in such types of vehicles have not yet been used. Such a hybrid power-train provides the choice of driving either in fully electric, hybrid or diesel mode. This provides good advantages. When using battery power the buggy can drive very silently and this comes in handy when executing tasks requiring secrecy. In such cases the vehicle’s engine almost emits no heat, so it is difficult to spot the buggy even using special surveillance measures. With its battery fully charged the buggy offers an approximate range of 200 km.

The battery can be charged both using an external electricity source and an integrated diesel generator, which accepts any quality diesel fuel. This generator also provides the possibility of driving in hybrid mode, when engaging only battery power is not optimal. When in hybrid mode, Krampus offers a range of up to 1000 km. Such a possibility provides the buggy’s versatility and practicality, as in every situation it gives a choice of the most suitable energy source and mode of driving.

It’s also worth mentioning that the buggy is indeed very durable and can go as fast as 120 km/h, it can transport cargo of 500 kg; its specific modular design allows for easy replacement of damaged parts or components.

In what stage is the “Krampus” project currently? Can we expect that this buggy will soon be used in practice?

Currently we are working on programming of the buggy’s systems and subsystems. We are also preparing for integration of autonomous driving systems. We are planning to finish the first “Krampus” prototype version by the end of summer of this year. This version, which we call MK1, we are planning to introduce at DSEi - (Defence and Security Equipment International) - the international defence and security solutions fair held in London. Then we will start designing a version of the buggy tailored for concrete customer’s needs. Thus, the ready-to-use Krampus may soon be available. However, we do not jump too far ahead and firstly focus on tasks which we still need to accomplish. We have plenty of and equally plenty of opportunities for improvement.

Thank you very much for the interview and good luck!

Darius Antanaitis, a reserve Major of the Lithuanian Army, participant of military missions in Afghanistan and Iraq who, with a team of like-minded companions, is designing a new generation side-y-side buggy “Krampus”.