In August, from France, a magnificent multi-media water fountain show in Ogre 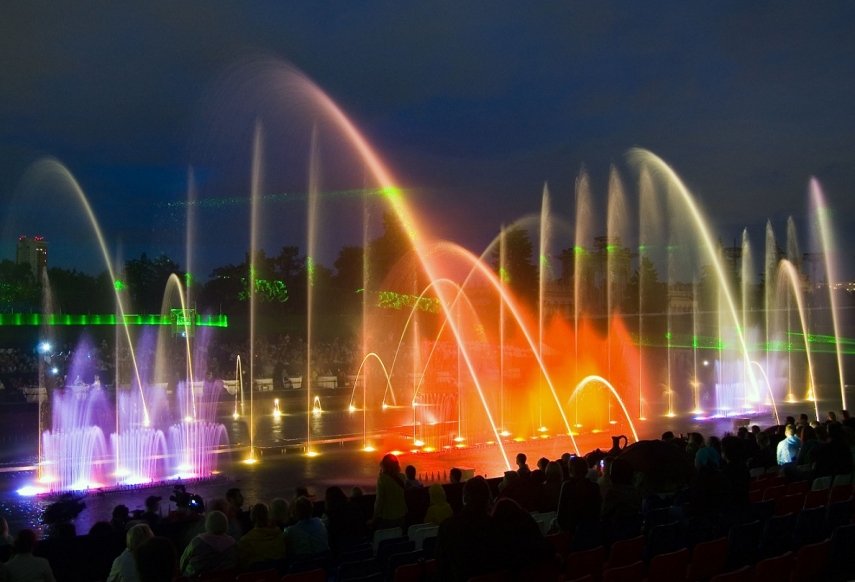 On the 10th August, at the Open-Air Stage in Ogre, an extraordinary water, light, and musical synthesis will be visible. It is just a short display of a multi-media fountain show from France. Dancing fountains “Water Theatre”, geysers, arches, mist, video and laser projections on water screens, artists of different genres, and pyrotechnic effects are all an integral part of the show.

This time the show will be very special due to the cooperation between the conductor Guntars Bernats and the symphonic orchestra, who will perform the entire, more than one-hour long programme, live. Fountains and water technologies will not be programmed in advance, as it is usually done, to ease the workload during the show. The Creative Director of the “Aquatique Show International”, Jean Kohler, will attend the show and create and lead the performance manually. It is a unique opportunity to see this show which always is breath-taking and is never the same.

The impressive show was created by one of the globally leading companies in the water show field, “Aquatique Show International”, and its official representative office in the Baltic States and Russia, the group of Latvian producers “WS Production”. The head and producer of the representative office, Inguna Vanzovica, said: “The first musical fountain show in Latvia took place in 1999, exactly 20 years ago, at the Open-Air Stage in Ogre, and it was attended by more than 15,000 guests. At that time, we could not even imagine what water show technologies and opportunities lay ahead. The programme prepared for the 10th August will use more powerful and technologically improved fountains. Their height will reach up to 20 to 25 metres, taking into consideration the technical capabilities of the venue. The show will be supplemented by video and laser projections, on almost a 300 square metre large water screen, and with powerful pyrotechnical and stage effects. Moreover, to delight the senses, well-known melodies from around the world will be performed by wonderful and loved artists, the soprano Sonora Vaice, three Latvian tenors, Nauris Puntulis, Miervaldis Jencs, and Guntars Rungis, and Juris Kulakovs will play piano. Of course, we have prepared surprises! Currently, a unique performance is being prepared by Ieva Kemlere and Rolands Steinbergs which will amaze everybody! We invite Latvians and our neighbours to attend the event, as it is a very rare opportunity to enjoy such a show in the Baltic States.”

Technically, to be able implement this large project, fountains that will consist of more than 5,000 nozzles, and equipment that ensures their operation with a total weight of more than 20 tonnes, will be placed into a 240 square metre pool with 1200 tonnes of water.

The event will take place at the Open-Air Stage in Ogre, on Saturday, the 10th August. Entrance from 19.30 p.m. The performance will begin at 20.00 p.m. when the quintet led by Elza Rozentale will start the show, followed by Andris Erglis and accompanying band led by Janis Strazds. The event will be hosted by Normunds Laizans. The multi-media water fountain show will start at 22.00 p.m. and it will last for one hour and 15 minutes ending with an impressive climax. Tickets are available from the 22nd July at the ticket offices of Biļešu Serviss, www.bilesuserviss.lv, www.tiketa.lv and www.tiketa.lt.

The first dancing musical fountain show in Latvia took place in 1999 in Ogre. Then and now the show is created by one of the largest and globally leading companies in the water show field “Aquatique Show International”, based in Strasbourg, France. As they say themselves: “We are Cartier in the world of water shows!” The continuous development of new technologies has allowed the company to create amazing multi-media water shows for more than 40 years, which are shown in at least 50 countries around the globe, in America and Europe, as well as Australia, China, India, South Africa and others.