President of Estonia calls for governmental and administrative reform 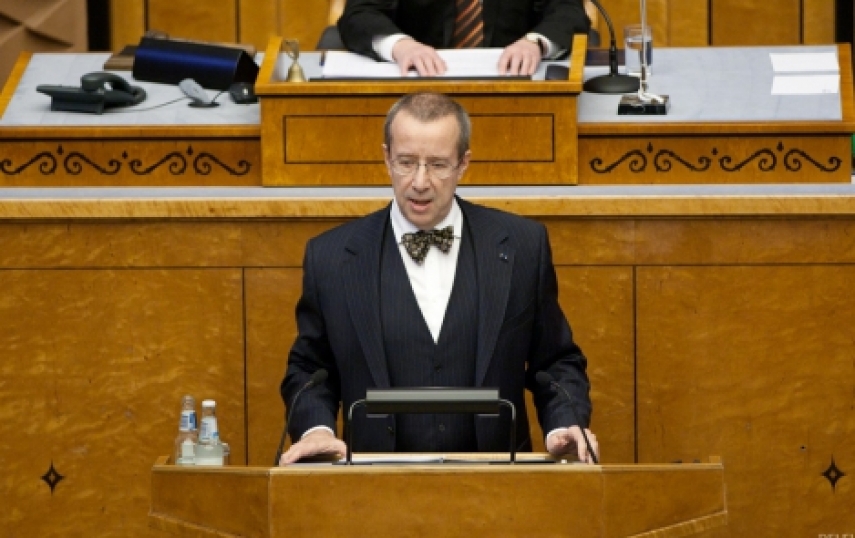 The Estonian President, Toomas Hendrik Ilves, said on Monday during the inaugural session of the new Riigikogu (Estonian Parliament) that the time is ripe for governmental and administrative reform in Estonia and the parliament taking its oath of office today and the cabinet, which will also soon do so, has its work cut out.

Ilves noted in his speech that this session marked a major milestone, as in the years prior to the occupation, Estonia managed to elect only six parliaments; while the parliament taking office today is the seventh Estonia has had since regaining independence.

But Ilves also addressed a number of flaws he believes afflict the Estonian political system: "unfortunately, Estonia's current political climate is rife with politicking, populism in the bad sense of the word, and saving one's own skin. There's too much excessive, profligate legislative drafting. The state budget process has become more bureaucratic and rigid. Often, ill-considered decisions are being made just to curry favour. This also includes arguments about things that aren't worth arguing about, while issues that do deserve more discussion are quietly rubber-stamped on through," Ilves said.

"I hope that the election coalition currently being formed will be unanimous about this: laws are a means to an end, not an end in itself. Rewriting laws just for their own sake will not help address people's concerns," Ilves stressed.

Ilves called the parliament to tackle the actual real-life problems one by one and look for the best solution, while respecting everyone's opinion. "Anyone can say what not to do, and what could go wrong. Instead, let there be competition between many visions of how to do it and how to succeed," he said, adding that everything should also be explained to the people in an easily comprehensible way.

Ilves said that the implementation of a number of important reforms will coincide with the new parliament's term in office: bringing disabled people back to working life and the new Child Protection Act are just a few examples. He also said that the border treaty with Russia awaits ratification; we need a national defence system built on solidarity and encompassing all of society; members of parliament have the responsibility to keep abreast of topics and international developments related to Estonian security, to the European Union and to information technology. In early 2018, Estonia will hold the presidency of the European Union. That, too, will behove us to demonstrate what a small e-state can do with diligence and agility."

On Monday evening, Ilves signed a resolution to appoint Taavi Roivas as the candidate for the position of prime minister, the president's office announced.

Taavi Roivas is Chairman of the Estonian Reform Party, which won the largest number of seats in the recent Riigikogu elections.

The Head of State said at the meeting with Taavi Rõivas that the formation of a majority coalition must now take place as soon as possible, followed by the conclusion of a coalition agreement, so that Estonia can look to the future with stability. It has been one month since the parliamentary elections were held.

"Should this be a power coalition between the Reform Party, Social Democrats and the Pro Patria and Res Publica Union, the 59 votes that these three parties have in parliament will give you a strong mandate; use it responsibly and with due statesmanship," President Ilves told.

"A majority government is only successful when it secures the support of the people together with that of parliament," he added.

Taavi Rõivas now has 14 days to give a presentation about the principles for the formation of the future government and obtain support for it from the Riigikogu.