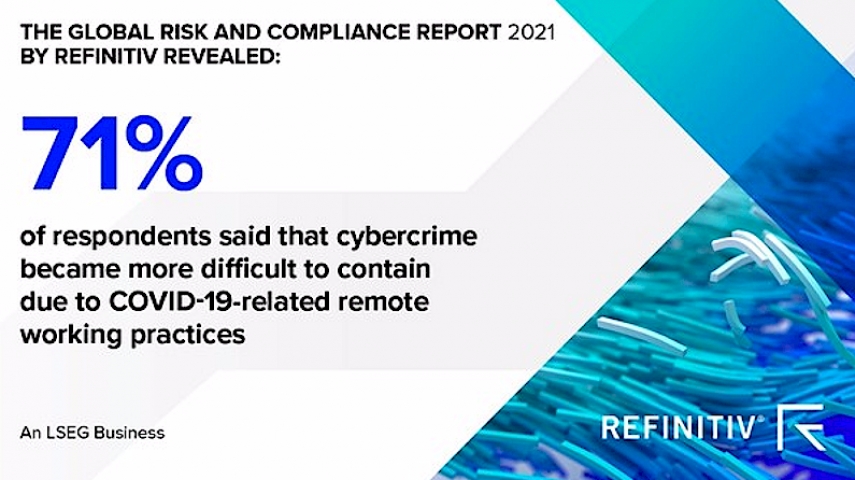 Refinitiv’s new research report takes an in-depth look at how the financial risk landscape is changing in the wake of COVID-19, and examines the inter-connected roles of data, technology and collaboration across a changing landscape. Key findings include;

Nearly three-quarters of respondents believe that COVID-19 has increased the threat from cybercrime. The proportion of respondents’ third-party relationships that have undergone due diligence checks has fallen from 49 percent in the 2019 report to 44 percent in the 2021 report. In the fight against financial crime, nearly nine in ten respondents say that digital technology has helped them to identify criminal activity within their organisations.

The extensive report draws on research commissioned by Refinitiv during Q1 2021 and collates responses from nearly 3,000 respondents, finding that the pandemic has changed the face of financial risk in myriad ways.

The headline finding that a significant 71 percent of respondents found cybercrime more difficult to contain as the pandemic forced many to work remotely, is unsurprising.

As more activities and transactions across all industries began to move online, so do opportunities for cybercriminals to conduct illicit activities flourished in tandem, raising already high levels of organisational risk.

Moreover, 65 percent of respondents agreed that COVID-19 has forced them to take shortcuts relating to KYC and due diligence checks.

This is likely the result of increasing pressure on organisations, as the ongoing ripple effects of the pandemic are felt ever-more acutely: nearly three-quarters (73 percent) reported that their companies have been under significant or extreme pressure to increase turnover as a result of the pandemic.

Whilst these findings undoubtedly show that the risk landscape is becoming more complex, some positive news also emerged:

The pandemic has had a range of effects on companies, changing the nature and scale of risk, but also focusing attention on some of the most relevant and important global issues of our generation.

Compliance gaps and a lack of awareness

The findings suggest a worrying combination of growing gaps in compliance and diminishing awareness of third-party related risks.

Just 44 percent of respondents’ third-party relationships have undergone due diligence checks. In Refinitiv’s 2019 report, the comparable figure was 49 percent. This is indicative of persistent gaps in formal compliance, and the situation has gotten worse at a time when risk has increased.

When large numbers of third-party relationships do not undergo formal due diligence, opportunities for criminals to further their illicit activities can quickly proliferate.

Organisations appear to be aware of the importance of avoiding any links to such crimes, with one-third (33 percent) of respondents highlighting that reputational damage caused by association with financial crime is their overriding concern.

At the same time, however, the percentage of respondents who confirmed that they were aware of financial crime in their organisations in the 12 months preceding the survey was 62 percent, down from 73 percent in 2019.

One possible explanation could be that a lack of awareness is being driven by low technology usage in a subset of companies.

Refinitiv is committed to delivering leading-edge technology and trusted data, and to promoting enhanced public-private sector collaboration. They believe that these are essential tools in the global fight against financial crime.

A substantial 86 percent of respondents agreed that innovative digital technologies have helped them to identify financial crime within their global operations.

In line with this belief, respondents are looking to increase their spend on technology. When asked about key areas of investment relating to financial crime prevention, the highest percentage (57 percent) of respondents indicated that they are investing in automation and digitisation during 2021.

Furthermore, it was identified that there is a strong correlation between the use of technology and enhanced collaboration: 60 percent of respondents who regularly use technology to prevent financial crime were also found to be more likely to have better collaboration with law enforcement agencies than those who don’t use technology.

As the pandemic continues to transform the risk arena, it is this powerful combination – technology, data and collaboration – that Refinitiv believe can finally turn the tide on rampant illicit activity, despite the heightened risk levels ushered in by COVID-19.