Hot curry on a hot night 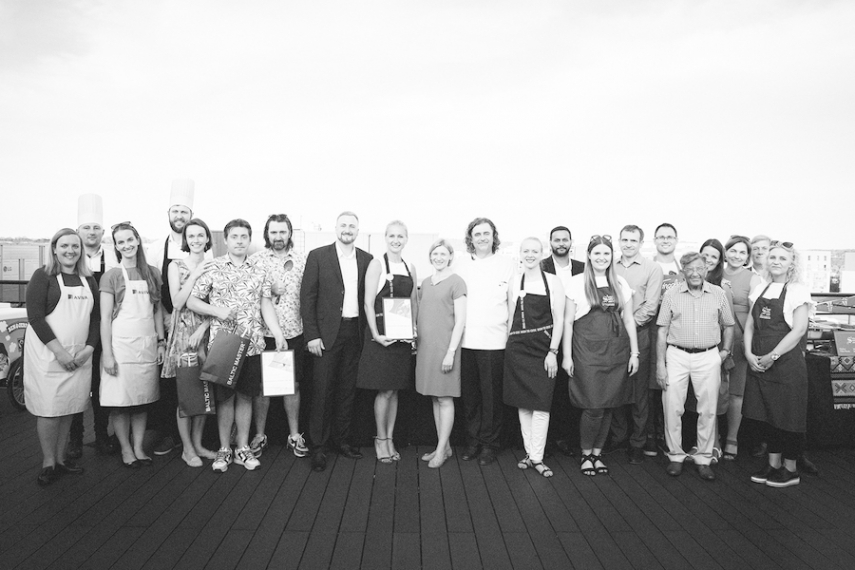 The British Chamber of Commerce in Lithuania (BCCL), ended their 2017-18 season with the 5th Annual Curry Cook-off on the Čiop Čiop roof top terrace in Vilnius. Six teams prepared  various curry dishes for an audience of BCCL members and friends on 28th June, and before three judges – Rajinder Chaudhary, the Honorary Consul of India to Lithuania and owner of Sue’s Indian Raja in Vilnius; Gaspar Fernandes, Chef at Gaspar’s Restaurant in Vilnius and Brand Chef at Baltic master, Evaldas Žaliukas, who was joining the judging panel for the first time.

The teams who had prepared two dishes, one of which was based on  Chicken Tikka Masala, were put to the test with probing questions from the judges. Some interesting ingredients and cooking methods were discussed in between savouring the aromatic spices wafting through the warm air and the actual tasting.

The audience were not mere bystanders either. They were encouraged to sample all the various dishes and to vote for their favourite, which was won by the team representing the recruitment company, S3 International.

After over an hour of tasting, questioning and deliberating, during which guests could enjoy more culinary delights, offered by Sue’s Indian Raja, the judges made their decision. Unlike the Great British Bake off on BBC TV, there were no soggy bottoms on offer here, just questions about saltiness, flavouring and the texture of the curry!

Last year’s runners up, The Cricket Club of Lithuania lifted the first prize with the team from Barclays coming second. The third prize was won by the audience favourite, S3 International.

A great summer’s evening was had by all.

More photographs from the cook off and information about the BCCL including membership details are on the website www.bccl.lt

A “Baltic shoulder” for Ukraine. Why the Ukrainian government considers cooperation with the Baltic States a strategic priority

Recover better together – Taiwan can help