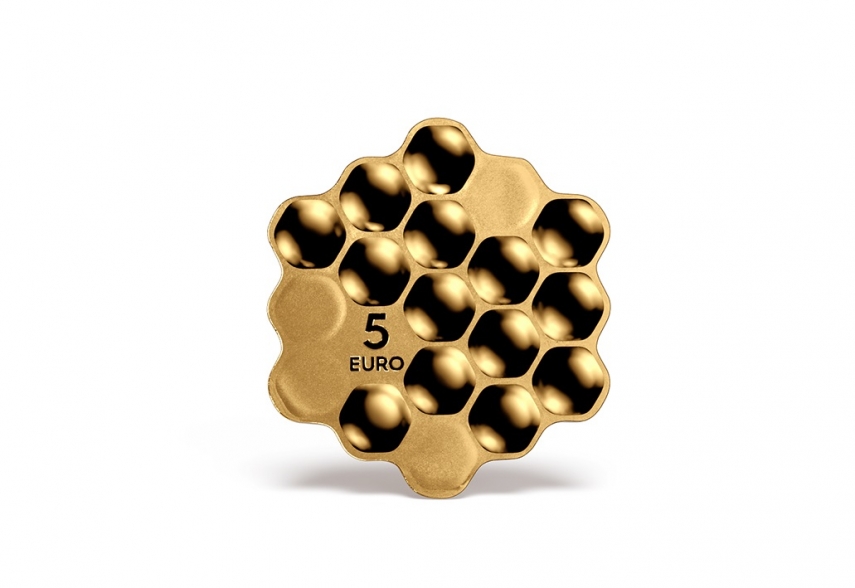 Honey Coin, based on Arturs Analts' work which was awarded the first prize in the competition for the best design of an innovative collector coin, has been voted Latvia's Coin of the Year 2018 in the traditional public vote. More than 9000 votes in total were received, with over 2700 giving preference to the Honey Coin.

Honey has a special role in Latvia. Together with the diligent honey bees it is widely present in our folk songs; it is an important food, traditional medicine and cosmetics product. Citizens, who are as busy as bees in their day-to-day lives, fill their country like bees fill a hive. Therefore, the Honey Coin is a symbol of diligence and sweetness of work. The bees also have a significant role to play in maintaining the biological diversity, and their presence is an indicator of nature's healthiness.

The Honey Coin featuring honeycomb cells is quite an unusual silver collector coin plated with gold. Honeycomb cells form a rough outline of the geographic contour of Latvia and the Gulf of Riga. Various types of frosting are applied to achieve this effect. The shape of the coin is unique: several coins can be placed side by side like pieces of a puzzle to build up an even larger honeycomb the same way as bees do it in their hive. The coin was struck by UAB Lietuvos monetų kalykla (Lithuania).

Addressing the coin artists at the awards ceremony, Janis Blums, a member of the Board of Latvijas Banka and the Head of the Cash Department of Latvijas Banka, said that the year 2018 marked Latvia's centenary which was celebrated by way of many cultural events. This theme was presented in collector coins as well. "Coins are works of art and at the same time also a contribution to the preservation of the cultural and historical heritage. Every one of them is a result of a long creative process", he said. "It is a major accomplishment preserving our story about the cultural and historical values, yet it is also a valuable piece of art in itself."

Elina Berzina, a representative of the Latvian National Museum of Art (LNMA), presented the special award of the expert commission of the LNMA. The Honey Coin was recognised as the most artistic coin of the year 2018. "The Latvian National Museum of Art is happy for the opportunity to express our opinion regarding the most beautiful coin of the year. This time it was really difficult to make our choice. Therefore, along with our top nomination, i.e. the Honey Coin, innovative in terms of its concept and form, designed by Arturs Analts, we would also like to praise the Coats of Arms Coin by Laimonis Senbergs and the coin dedicated to Curonian kings by Arvids Priedite which stand out as brilliantly developed pieces of coin art", emphasized Mara Lace, Director of LNMA.

A special award to the artists Laimonis Senbergs and Janis Strupulis of The Coats of Arms Coin was presented by Anita Vasiļjeva, a representative of SIA Tilde and Manager of letonika.lv portal, and Sandra Ozolina, the Deputy Director of the Culture Information Systems Centre.

In cooperation with the news portal Delfi, Latvijas Banka held the public vote for Latvia's Coin of the Year 2018 from 25 March to 7 April 2019. This public vote takes place on a regular basis and is an important annual event in Latvian coin art.

The list of the 15 lucky winners of one of the collector coins issued in 2018 will be published on Latvijas Banka's website at www.bank.lv.

Since 1993, Latvijas Banka has issued 98 lats collector coins and 32 euro collector coins, with over 50 Latvian artists having participated in designing them.

Latvian coins have earned high international respect and a number of prestigious awards; moreover, the "Coin of Latvia" won the international 2010 Coin of the Year Award at the contest organised by US Krause Publications and its magazine World Coin News. In 2015, the silver collector coin "The Baltic Way" was recognised as the Best Contemporary Event Coin at this contest. In 2018, the collector coin "National Entrepreneur" was announced the Most Artistic Coin of the Year at the contest.

The Coin Design Commission of Latvijas Banka (the former Commission for the Thematic Concept of the Banknotes and Coins), operational since 12 November 1993, plays an important role in the coin issuing process. The Commission consists of the employees of Latvijas Banka, outstanding Latvian experts of art and culture, and artists and scientists.

The collector coin "Smiths Forges in the Sky" was named Latvia's Coin of the Year 2017; the graphic design of the coin was created by artist Edgars Folks, and Ligita Franckevica is the author of the coin's plaster model.