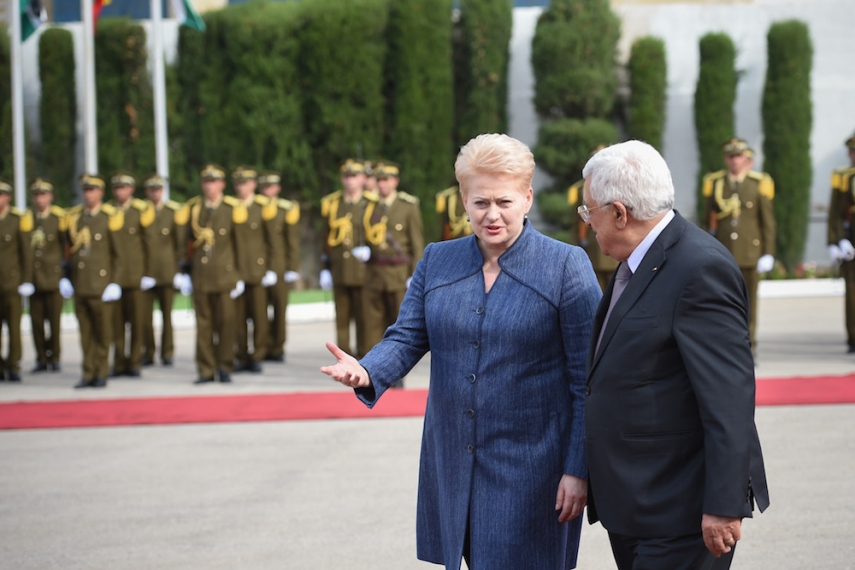 During a meeting on October 20, 2015, Lithuanian President Dalia Grybauskaite suggested to Palestinian leader, Mahmoud Abbas, that Lithuania can mediate in the peace talks between Israel and Palestine.

"As a small country and a member of the United Nations’ Security Council, we can contribute to the peace process,” said Grybauskaite’s press service.

“I suggested Lithuania could even participate if this is something both parties want and if we have the trust.”

Lithuania’s Foreign Minister Linas Linkevicius, says the call for Israel and Palestine to resume talks is not an exclusively Lithuanian initiative.

"We are still one of the 15 members of the United Nations Security Council, and have the enormous responsibility in discussing various matters, including, of course, the issues in the Middle East,” Linkevicius told BNS.

“In this respect, all countries propose and urge that Israel and Palestine should open direct communication and go back to the negotiations table without any pre-defined conditions.

“This is something everyone is speaking about, and not an exclusive initiative of Lithuania,”

The proposal to mediate should be viewed as willingness "to help the negotiations’ process in in every possible way, if something depends on us," said Linkevicius who is part of the president-led delegation to Israel.

During the visit, Grybauskaite said she was assured that neither Israel nor Palestine wanted the tensions to escalate.

According to the Lithuanian President, both countries refuse to negotiate and hold direct talks, which is "the biggest problem."

"It was just as important for us as it is for them to learn living next to a big country," she said.

"Lithuania understands both sides. It understands the pain, the anxiety and tensions that emerge between the two countries on a regular basis.”

The Lithuanian president described Abbas as “a peaceful person” who has done a lot for the sake of peace between the two countries.

"(He is) now ready to talk, however, not everyone is entirely ready to do so,” Grybauskaite concluded.

She is visiting the Israel/Palestine region amid tensions over new outbreaks of violence, which have claimed dozens of lives over the past few weeks.