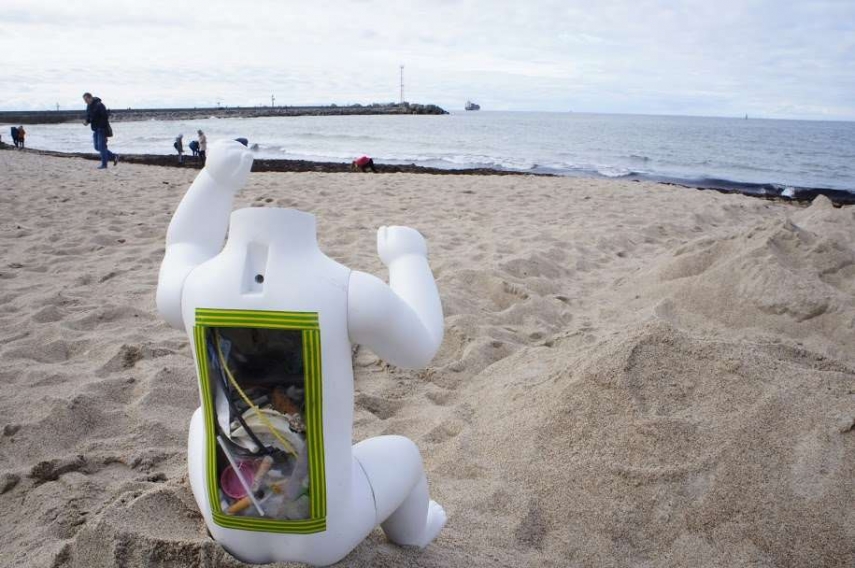 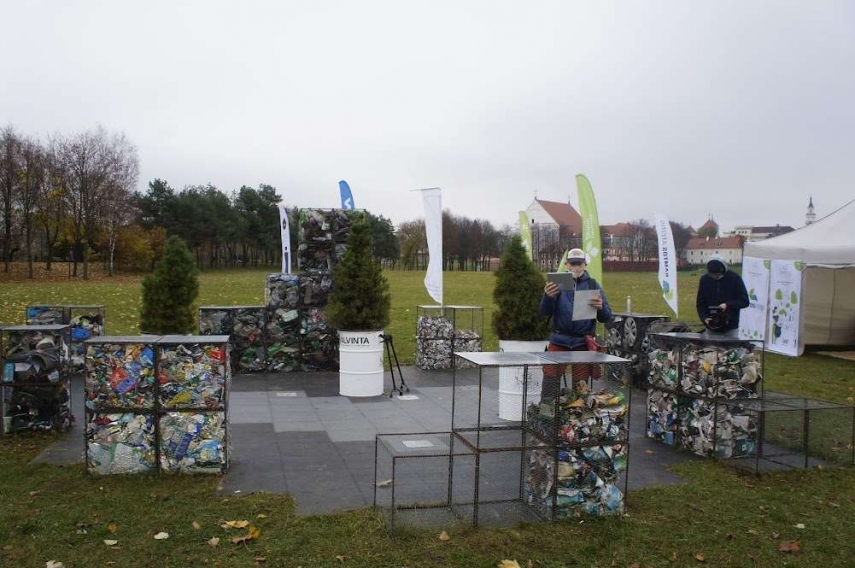 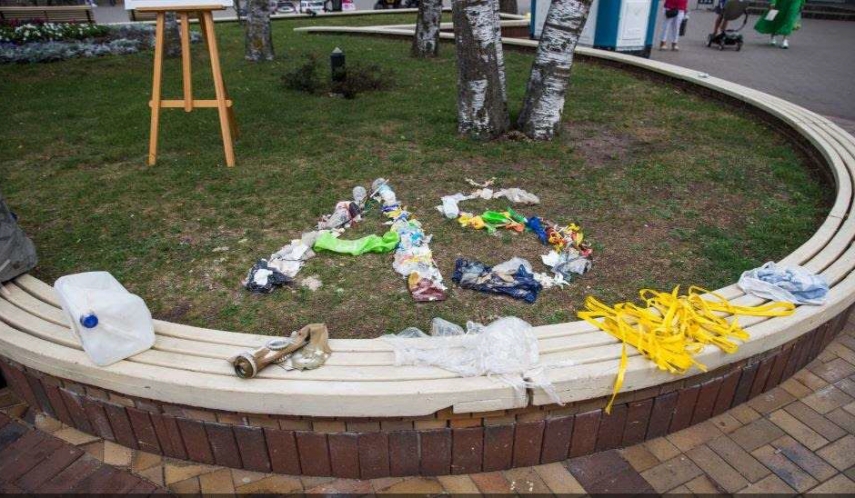 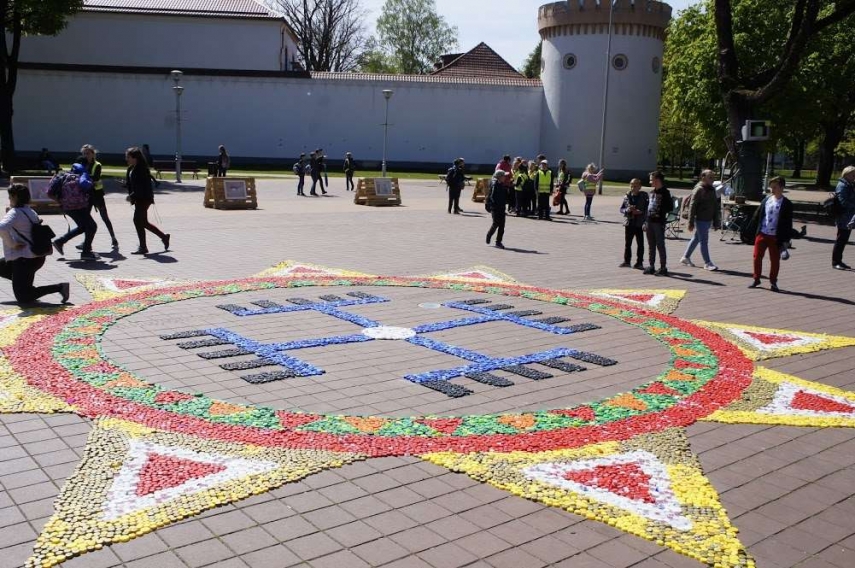 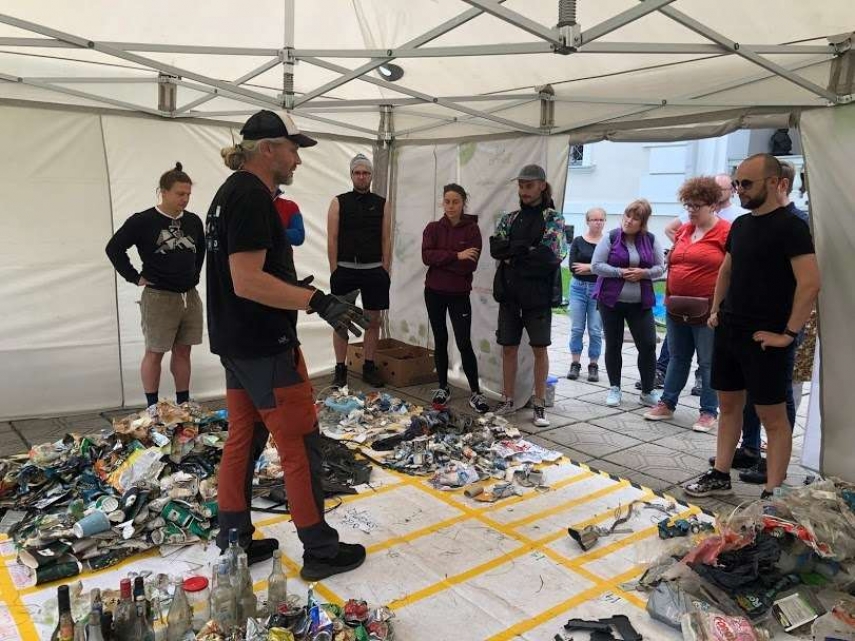 The winner of the Environmental Prize of Valdas Adamkus Presidential Library-Museum and Dana Gedvila Fund (5,000 euros) was announced on the International Mother Earth Day, April 22. This year, the committee elected Giedrius Bučas, the founder of the social initiative "Creative Corner 360°", change leader, social activist, social entrepreneur, and initiator of the sustainable hike around the country "For a Clean Lithuania!" in 2020.

Giedrius Bučas is awarded the Prize for promoting a sustainable lifestyle through his activities and personal example, creating social and artistic initiatives that bring together different communities, spreading environmental ideas, and debunking "green myths."

"Bučas' social initiative "Creative Corner 360˚", his 80-day hike around Lithuania collecting 52,000 pieces of waste (a total of 1,133 kg), as well as his eco-art installations, such as the "Waterfall of Values​​", which was exhibited at the MO museum in Vilnius, received attention and recognition. His efforts to educate the public and promote a sustainable lifestyle have not gone unnoticed. The personal example of Bučas himself is also very important, as well as his sincere and peaceful attitude and long-term commitment to the idea of ​​creating a more sustainable life in Lithuania," says Arūnas Antanaitis, the Head of the Presidential Library-Museum and one of the members of the committee.

Bučas' vision is a sustainable and clean world. Clean in every sense. He shares his experience and knowledge with anyone interested in sustainable consumption and environment protection, and says that the discussions are particularly interesting with children, young people and families. "Society needs to fundamentally change its approach to sustainability and consumption, we must understand that each of us is responsible for the kind of planet we leave for future generations. Let's make every effort and start looking for ways to live sustainably – by changing our habits and returning to core values, we will change the environment around us," said the environmental activist.

Bučas assures that he does not undertake his activities and work for the sake of prizes, but every positive evaluation is still pleasant. "I believe that when you give a part of yourself, you get much more in return. This evaluation only confirms it. I would be lying if I said it didn’t matter. Of course, this is a very important evaluation, especially coming from Valdas Adamkus, a man who is one of my inspirers and authorities. It shows that I am on the right track and, most importantly, that I have a lot of support from colleagues, like-minded people, and followers. It is an inspiration and responsibility to continue my work," the Prize’s winner assures, adding that the award funds will be used to carry out further activities and implement a new artistic and educational project.

When asked what he would like to wish for Lithuanian nature, Bučas says that above all he would like to dedicate his words to people. "Let's love and respect nature, not only in Lithuania, but also in the whole planet, and then nature will thank us. I just cannot separate nature, wildlife and people, we are one, all on the same planet, in the same ecosystem. We can be better and love both ourselves and the environment around us more, I sincerely believe that. And if I could, I would ask the Earth to forgive us for our mistakes, to give another chance for humanity to survive and to believe that we will change."

The award ceremony will take place on June 4, on the eve of the World Environment Day, in Vytautas Magnus University (VMU) Botanical Garden. The Prize to Bučas is planned to be presented by President Valdas Adamkus.

The organizers of the Prize received 21 nominations covering all four categories of the Prize – scientific achievements, environmental innovation in business, social activities, and environmental policy and management. "A total of 19 people were nominated, two of whom were nominated by different organizations. Nominations were submitted by public organizations concerned with environmental protection, individual social activists, business associations, educational institutions, civil servants, and politicians," says the Head of the Presidential Library-Museum Arūnas Antanaitis.

According to him, besides the Prize winner, other nominees have also received exclusive attention from the committee for their achievements in environmental protection in Lithuania: Klaipėda citizens' Initiative for Democracy and Ecology (KIDE) and its leader Alina Andronova for defending the interests of citizens wishing to live in a cleaner city; Žymantas Morkvėnas, leader of the Baltic Environmental Forum, for his long-term activities to preserve nature in Lithuania; Lina Paškevičiūtė for mobilizing social activists and representing non-governmental organizations in the National Forest Agreement; and Tatjana Paulauskienė for her promising and exceptional scientific invention, which allows to purify water from oil waste using recycled paper.

The winner of the Prize was chosen by a committee which consists of professionals from different fields: Prof. Birutė Galdikas (distinguished Lithuanian Canadian anthropologist and ecologist, VMU Honorary Doctor), Nerijus Jurkonis (Director of VMU Botanical Garden and teacher at VMU Department of Environmental Sciences), Dr. Visvaldas Varžinskas (Director of KTU Centre for Packaging Innovations and Research), Donatas Puslys (journalist and Head of Media and Democracy Program at Vilnius Institute for Policy Analysis), member of the European Commission Virginijus Sinkevičius (European Commissioner for the Environment, Oceans and Fisheries), and Arūnas Antanaitis (Head of the Valdas Adamkus Presidential Library-Museum).

Nominal President's Prize – to give meaning to and encourage environmental solutions

Gabrielius Gedvila, who lives in the USA, a long-time friend of Valdas Adamkus and head of his election headquarters when Adamkus ran for the Board of Trustees of the Sanitary District of Chicago in 1968, is convinced that environmental protection was, is and will remain a global problem that requires special attention; therefore, in order to give meaning and attention to achievements in environmental protection in Lithuania as well as to honor the memory of his late wife, he set up a 100,000 dollar fund, which will be allocated for the President Valdas Adamkus’ – his friend, a well-known environmentalist and the President of the country – Prize.

The Prize of the Presidential Library and Dana Gedvila Fund has been awarded since 2021 for laudable and noteworthy achievements and efforts to protect and restore the natural environment in Lithuania and its neighboring countries, and to ensure the sustainability of resources. The Prize will continue to welcome submissions of research and inventions, civic activities, individuals and organizations that draw attention to nature protection and encourage action, as well as political decisions or business initiatives that encourage a more sustainable development and a cleaner future by inventing or adopting the most advanced solutions.

In 2021, Mindaugas Survila, the director of the documentary film Sengirė, was the first winner of the renewed President Valdas Adamkus Prize.