First cornerstone of Rail Baltica in Estonia in place 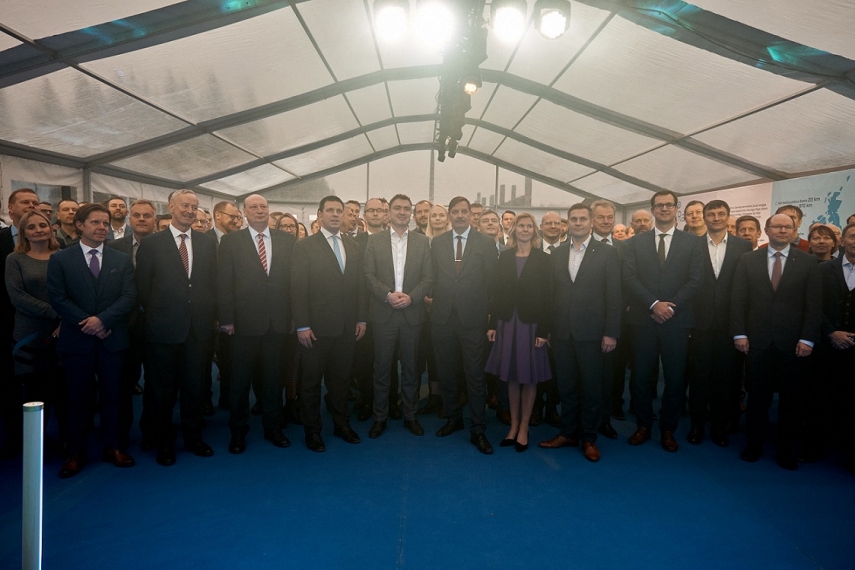 Yesterday, the cornerstone of the first construction structure on the Rail Baltica main line in Estonia, the Saustinõmme viaduct, was laid to mark the beginning of Rail Baltica's high-speed rail link.

“During the last couple of years, the Rail Baltica project in Estonia has progressed in good speed. The detailed technical design of the route is under way, the architectural competition for Ülemiste Joint Terminal has been successfully completed and negotiations with the winners are ongoing, and the technical designing of the RB Pärnu terminal is about to begin. As an important milestone today, we were also able to announce the start of the construction of Rail Baltica in Estonia and to jointly place a cornerstone on the Saustinõmme highway bypass,” said Riia Sillave, Head of Rail Baltic Estonia. "The continued strong support from the European Union for the project, which has been reaffirmed at today's event, is also gratifying."

According to Taavi Aas, Minister of Economic Affairs and Infrastructure, it is important to move forward with the project in good speed.

“Rail Baltica is the most important co-operation project of the Baltic States, so every event where we see actual progress of the project is significant. Equally important is good domestic and inter-agency co-operation, and I believe that Rail Baltic Estonia, the Estonian Road Administration and the Joint Venture of the Baltic States RB Rail AS will be able to successfully implement the co-operation that was signed today also at the future Rail Baltica sites”, said Aas.

“We are proud to be the contractor for Rail Baltica’s first construction project. We are pleased with the positive spirit of cooperation that characterises the project. We encourage Rail Baltica, as one of the largest clients engaged in infrastructure projects in Estonia, to take the lead in introducing more stringent occupational safety practices to the Estonian market,” said Kari Kauniskangas, President and CEO of YIT.

Saustinõmme viaduct, which crosses the main route of Rail Baltica, is the first cooperation project between Rail Baltic Estonia, the Estonian Road Administration and RB Rail AS in establishing Rail Baltica. Various intersections between the future Rail Baltica and the existing infrastructure will be built in cooperation with the Road Administration and also with major network operators in the coming years. This includes building highway bypasses, relocating high-voltage lines and gas pipelines, and so on.

The subject of the construction contract with YIT is a 4.1-kilometer four-lane highway with a connection between Luige and Saku junctions. In addition to the road bypass crossing the Rail Baltica route, new twin bypasses of the Saku junction and an animal tunnel are planned for the section. One of the three double bypasses on the road section, the Saustinõmme viaduct, will cross the planned Rail Baltica route. All works should be completed by the second quarter of 2021.

The total cost of the construction works is approximately 19 million euros inc VAT 20%, of which the Cohesion Fund contribution to the Road Administration works is 10,31 million euros and the Saustinõmme viaduct financed by Rail Baltic Estonia OÜ and the resulting additional works about 6,92 million euros.

Rail Baltica is a new economic corridor, providing an environmentally friendly and convenient railway connection that connects the Baltic States with the European railway network. The infrastructure will allow passengers to reach Tallinn from Pärnu in 40 minutes and Riga in 2 hours.