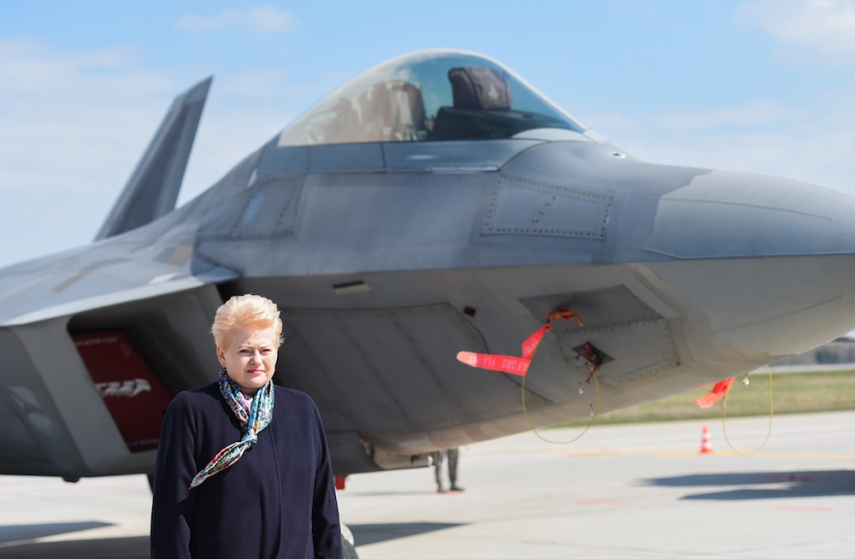 Observed by Lithuanian President Dalia Grybauskaite, the jets landed in the Lithuanian Air Force Aviation Base in Siauliai, which hosts the NATO air-policing mission.

"The arrival of one of the most modern U.S. fighter-jets in Lithuania today has shown the U.S.’ capacity of quickly and efficiently ensuring air-space defence,” said Grybauskaite at the jets’ welcoming ceremony.

“It is a signal that NATO is ready and capable of deterring any type of threats.”

The visit came at a time of increased tension in the region due to recent incidents involving Russian fighter-jets flying close to U.S. naval vessels and airplanes in the Baltic Sea.

Grybauskaite said that the Russian military's aggressive actions and a buildup of weapons around Lithuania's borders and Moscow's political will to use force posed an existential threat to Lithuania, as seen from the Ukrainian example.

However, she said that the message the visiting U.S. fighters were sending was not directed against any specific country.

"I'd rather not mention the neighbours,” she said. “I’d like to say that no matter who they are, they'd better not poke their nose here [in Lithuania].

According to Grybauskaite, there is no need for permanent basing stealth fighters in Lithuania.

However, she feels their deployment in Europe should be more permanent.

"What is the most important for us is that both NATO and the United States ensure greater security in Europe. It is not so important where such aircraft will come from,” she concluded.

At present, 12 F-22s are currently station in Europe.

Deborah Ann McCarthy, the U.S. ambassador to Lithuania, said that the visit of the jets showed the U.S.’ “commitment to Article 5 of the Washington treaty and collective defence".

Lieutenant Colonel Daniel Lehoski, the Commander of the 95th Fighter Squadron, said that the fighters would leave Lithuania on the same day that they arrived.

He said that the F22s that had landed in Siauliai were unarmed.

Introduced in 2005, the F-22 Raptor performed the type's first combat sortie during the American-led intervention in Syria and Iraq.

April 26 saw them visit Romania after visiting Estonia and Poland in 2015.