Expert: a foreigner who wants to live an active life in Estonia needs to learn the local language 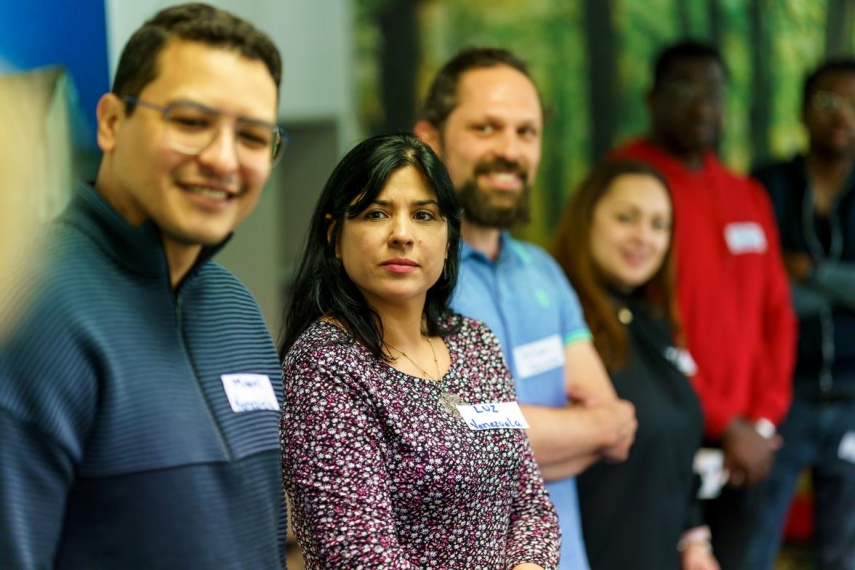 Thousands of foreigners took part in the national adaptation programme and language courses offered by the Estonian state free of charge in 2022. According to the programme expert, learning Estonian is an inevitable part of living in Estonia, as otherwise many opportunities would remain unavailable to foreigners.

Within the framework of the national free adaptation programme, Settle in Estonia, courses supporting integration into local life have been organised for foreigners for the 8th year running. This year, almost 2,200 people participated in the courses.

"Language lessons make up a third of all courses, and this is completely logical. For a foreigner who wants to live an active life in Estonia, learning Estonian is absolutely inevitable. Otherwise, they may not be able to take part in many opportunities — be it job opportunities or other activities that require communication. Estonians also know other languages, and of course, you can go about your business in other ways, but then the foreigner will forever be a tourist in Estonia," says Martin Lään, organiser of the courses, according to whom it should not be difficult for any foreigner to get help in another language, for example at the railway station or when finding a cafe.

The second most popular course among foreigners is the basic module, where one can find answers to the main and most general questions about life in Estonia. The third most interesting is the course related to working in Estonia. At the same time, there are several other training courses with more specific topics.

Estonia's contribution to the adaptation of foreigners differs from its neighbours

According to Kerli Zirk, Advisor of the Department of Cultural Diversity of the Ministry of Culture, the country has tried to find as many ways as possible to help foreigners settle in Estonia better and to convey information about the adaptation programme to the target group.

"In our digital society, information transmission takes place automatically in many cases, i.e. as soon as the foreigner has received a residence permit. At the same time, we also have to consider that all foreigners who have arrived in Estonia are not necessarily as tech-savvy as we are used to here. Therefore, adaptation courses continue to take place both online and as physical courses," explains Zirk.

Estonia's adaptation programme differs from many neighbouring countries in terms of its structure and many other aspects, where similar programmes have also been created. "For example, this year we created a separate training module for war refugees who arrived from Ukraine, the like of which is not offered even by many countries that are significantly closer to Ukraine," describes Zirk.

According to her, it is also special that the country offers an adaptation programme not only for those coming from third countries but also for those arriving from the European Union — this is quite unusual compared to other countries.

The desire to contribute to the better adaptation of foreigners is undoubtedly two-sided, according to her. "On the one hand, as a country that hosts foreigners, we have an obligation and a desire to create good opportunities for them to move here. On the other hand, we want to better integrate the people who arrive here into society, so that they have the desire to be a part of the society here and thereby also contribute to our economy," explains Zirk.

Although the adaptation programme for foreigners also includes a general cultural overview of our country, customs and manners, according to Lääne, who coordinates the courses, the most important topics for foreigners are practical everyday issues.

"Healthcare, the local real estate market, looking for and applying for a job, and schools and kindergartens - these are TOP topics driven by practical needs," he describes and adds that many questions also arise on the topic of migration formalities — be it extending, changing or applying for a residence permit, but also job change, quotas and other related things.

"Over the last 8 years, the programme has clearly found its place in Estonia and is well-known among foreigners — and also among those who are planning to come to Estonia. It is known that this is a place where you can get high-quality free language learning and information about life in Estonia.

Greater awareness of the program has in turn increased the number of groups, and participation in the courses has increased over the years," Lään describes. However, this year's troubled times in the world have highlighted the need for the programme even more than before, which is why the courses for war refugees from Ukraine are also very well attended.

Willingness to learn and adapt is critically important

According to Kerli Zirk, Advisor of the Department of Cultural Diversity of the Ministry of Culture,  adapting to change does not only affect the foreigners arriving in Estonia, but also the programme itself.

"We are moving in a direction of making the courses more compact and adding more independent learning to them. We are also considering adding higher language levels in addition to A1 and A2 language studies," she describes the programme's future. According to Lääne, who is coordinating the courses programme, the training could include additional practical activities in the future, for example, study trips to Kumu and Arvo Pärt Centre or a collective visit to the Song Festival.

He also shares some advice for newcomers, who wish to blend into the local community. “It definitely pays to be precise, especially with any kind of documentation. In Estonia, everything is based on what is written down — whether it is a law or an employment contract - and ignorance is not an excuse here. This is often a surprise to those who arrive here.

It is also worth knowing that the Police and Border Guard Board is not to be feared, but is rather a place where you can ask for advice. At the same time, those arriving in Estonia could certainly join foreigners’ networks and social media groups," he says. "Active, but not aggressive, states of being and of mind, are also keywords that help to settle into local life more smoothly. Anyone who has the slightest interest and desire to explore this cold country, whose closed-minded people are at the same time very warm, will certainly soon be able to do well in Estonia.