Exhibition from the cycle The Generation 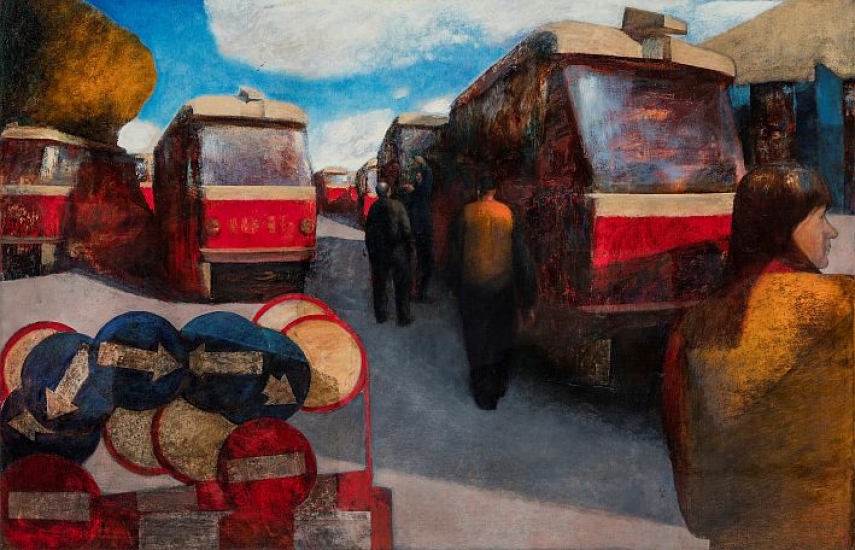 An exhibition of Daina Riņķe’s paintings, which continues the museum’s cycle of exhibitions The Generation, will be on view in the 4th Floor Exhibition Halls of the main building of the Latvian National Museum of Art in Riga (Jaņa Rozentāla laukums 1) from 26 January to 31 March 2018.

Daina Riņķe’s laconic form of expression caught the attention of critics already in her first exhibitions at the end of the 1960s. At the time, the contents of her paintings were advantageous material for thematic art exhibitions. Her works were accepted in exhibitions and earned awards, yet the innovation in comparison with the ‘harsh style’ figurative works of the 1950s was the very treatment of the subject – motifs of rural life and the city without active participation of humans. The rejection of depicting the process of work brought a peculiarly detached, metaphysical mood, and the critics of the time were searching for a name for the artist’s interpretation of realism, seeing in her visions a fusion of hyperrealist and socialist realist currents. If back then Daina Riņķe’s works were an innovation in formal language and proof that a simple environment can be beautiful and that this self-evident existence possesses value, then today they are a nod to a vanishing time and places. Just like in reminiscence – certain scenes from life become illuminated in the nothingness of the universe of memory – clear, without unnecessary explanations.

The artist masterfully manipulates human ability to perceive a moving image – what she paints is a still, a static version of an everyday event (Workday at the Tram and Trolleybus Trust, 1980) that allows the viewers to gradually become aware of the transcendent nature of these proceedings.

Daina Riņķe builds her paintings from geometric structures of various sizes, with the energy they encapsulate simultaneously representing explosive movement. That which seems close and familiar is revealed as a part of an eternally open space. Whether it is a rural farmstead, a water cistern, heavy machinery, a running dog, a horse in the field or a man at the end of the workday – the image is perfect and finished in its completeness, with no continuation, as a memory of what it had looked like. The viewer of Daina Riņķe’s works does not appear to be consciously directed anywhere. Silhouettes of buildings and people, foggy car windows are a kind of disguise. The reality seen in dim light as if from distance still captivates and gives rise to philosophycal reflections.

The artist’s works are held in the collections of the Latvian National Museum of Art (LNMA) and the Museum of the Artists’ Union of Latvia as well as private collections. The exhibition consists of works from the collection of the LNMA.