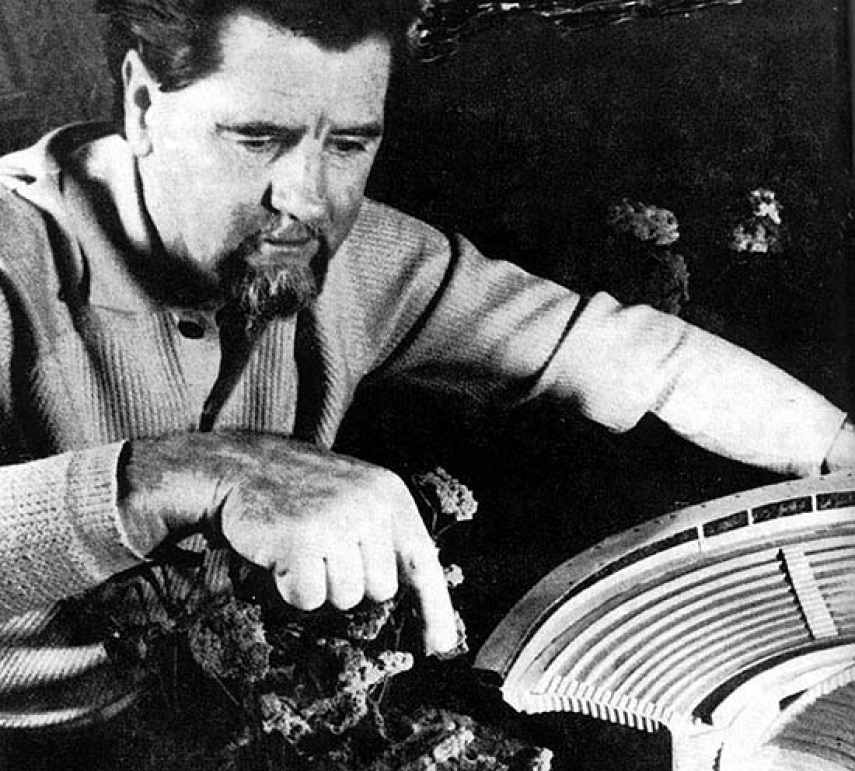 The exhibition has been organized under the auspices of the Deputy Chairman of the Senate of the Parliament of the Czech Republic Jiří Šesták in cooperation with the City of Liepāja, the Great Amber Concert Hall, the Embassy of the Czech Republic in Riga and the South Bohemian Theatre, České Budějovice.

He was born in Latvia, Liepāja (Libava) in 1907. He studied at the Academy of Arts in Jena and Erfurt (1927) and on the Bauhaus in Weimar, and worked in Poland and Germany. From 1945 to 1978 he was scenery director of the Theatre of South Bohemia in České Budějovice. In 1958 he designed the first theatre with a revolving auditorium, built in the castle gardens in Český Krumlov. During the South Bohemia theatre festivals, he took advantage of many settings for theatre plays, such as the Masquerade Hall and second castle courtyard. He also put the original stage machinery at the baroque theatre into service so that performances could be played there. One of his most famous projects was a swinging auditorium of Karlštejn castle; in 1969 he designed a polydimensional theatre space with a revolving auditorium as well as stage (this project was patented in 1974 but has never been realised). World scenographic literature has ranked Joan Brehms among the world's best scenographers, mainly for his design of the revolving auditorium in Český Krumlov.

1914-1918 - The vague years of the First World War. The family moves from St. Petersburg to Finland after the outbreak of the revolution. In 1918, he moves to the newly formed Republic of Latvia.

1919-1927 - After completing secondary education, he begins to study art at Jena and Erfurt Academy of Art. During these studies he attends lectures in the Bauhaus of Weimar.

1928 - Establishment of his own theatre group in Liepaja with whom he plays also his own productions in the Latvian countryside.

1933-1944 - As a stage designer and sometimes as a director, he works in several Central European theaters - in Wroclaw, Brzezg, Brandenburg, Bydgoszcz and Gdansk. He moves  to South America.

May 1945 - He comes to České Budějovice and works as  theater designer.

June 9, 1958 - Brehms develops the idea of a revolving auditorium and, he is the first to put it into effect as an experiment in the castle park of Český Krumlov. The Wiesenborn's play  Lofters is played.

1979 - The project of polydimensional theatre installations in the open air - Czechoslovak patent 1979 - has, for the time being, not yet been realised.

September 22, 1989 - The last premiere when Brem worked as a stage designer at the South Bohemian theater (Jozef Bouček - " Pastoral Night ").