Everyone is an artist! Fluxus then and now 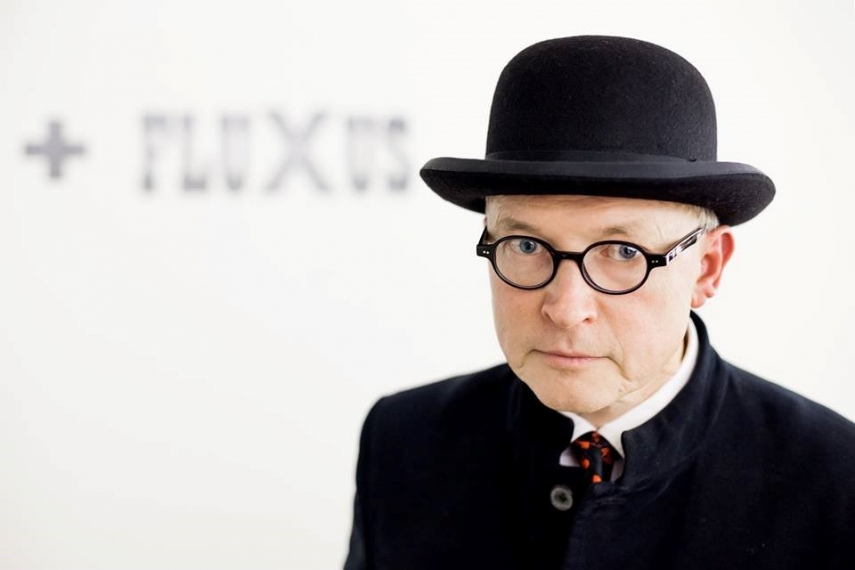 “Anything can substitute [for] art and anyone can do it”. These lines from the manifesto of Fluxus – an international community of conceptual artists, poets and composers that flourished in the 1960s – perfectly encapsulate its imaginative, revolutionary spirit. A product of the wildly irreverent and creative brain of Lithuanian émigré Jurgis Mačiūnas, Fluxus still inspires artists and audiences today. And Lithuania, Mačiūnas’ native land, is just the place to experience the freedom and playfulness of Fluxus yourself.

The mastermind behind the movement

George Maciunas, born in Kaunas as Jurgis Mačiūnas, fled his home country with the advance of the Red Army. Following a few years as a displaced person in Germany after the war, Maciunas headed for the US in 1948. There, he buried himself in 11-year studies of arts, traversing colleges in the East of the US from Pittsburgh through to New York.

It was in October 1960 that the term Fluxus first came to Mačiūnas. He was originally going to use it for a magazine of the Lithuanian Cultural Club in New York, but when that publication failed to materialise, he held onto it. And waited. It would be 1963 before the first Fluxus Manifesto was published, and another year until the Fluxus magazine itself appeared. Another Fluxus Manifesto then followed in 1965, which radically refined the ideas underpinning Fluxus.

Fluxus looked for value in the commonplace, believing that art can be anywhere and belong to anyone. For Fluxus, dripping water into a vessel was a musical performance. So was washing one’s face or even destroying a piano. Meanwhile a box of everyday objects, such as playing cards, keys and elastic bands was as significant an artwork as a one-of-a-kind painting.

Simply put, Fluxus’ intent was to break down the barrier between art and life. By democratising art production and injecting a very large dose of humour into the whole shebang, Fluxus sought to tear art away from the clutch of the elite and give it to the masses. To undermine the commercial value placed on art, the Fluxus collective produced random, cheap, ephemeral, and frequently comical artwork and event scores.

“Fluxus strongly opposed the exalted status of the artist and the concept of a work of art as a product,” explains Gintaras Sodeika, composer and director of the Jonas Mekas Visual Arts Centre. “In 1961, the year considered the formal beginning of Fluxus, the movement was quite a new and provocative phenomenon as art of a similar nature had only been around for a decade.”

According to Sodeika, all that Mačiūnas and his Fluxus colleagues touched – films, festivals, concerts, food, sports games, performances – became a merry, playful celebration filled with jokes and laughter. Mačiūnas did not lose his humorous outlook on artmaking and life even in the face of an untimely death from cancer.

“Jurgis promised to write in his will that his ashes should be placed in a miniature sculpture that looked like him. He thought it would be very funny – all his friends sitting around his idol,” Sodeika recounts.

Disenchanted with the elitist attitude they perceived in the art world at the time, many key avant-garde artists in the 60s took part in Mačiūnas-led Fluxus, including George Brecht, Yoko Ono, and Joseph Beuys. Jonas Mekas, another Lithuanian-born titan of the avant-garde and a pioneer of American experimental cinema, documented Fluxus through the lens of his camera.

Paradoxically, despite always being in opposition to established norms, Fluxus has now become an important part of many collections of twentieth century art, including the Tate and MoMA. Arguably though, Fluxus found its greatest expression as a living and breathing experience.

And there’s no place where one can experience Fluxus better than in Mačiūnas’ home of Lithuania. Between the country's twin centres of Vilnius and Kaunas (only a 60 minute car ride separates them), art lovers can truly get to grips with what makes Fluxus so special.

Kaunas, the birthplace of Mačiūnas, lets visitors know it’s a Fluxus city as soon as they land at the airport. That’s right – Kaunas International Airport became Kaunas Fluxus Airport last year, and will keep this name throughout 2022, while the city holds the title of the European Capital of Culture.

The real flavour of Fluxus, however, awaits in the city itself. East of the Old Town lies George Mačiūnas Square – a small, triangular square with an Aztec symbol painted on the ground. This unique traffic island is surrounded by three busy streets–you can’t access it and you can barely even see it from the street level. It’s nonsensical – and that is the point. Dubbed the world’s first invisible square, this curious plaza is located right across from the house where Mačiūnas grew up – you can check out the memorial plaque commemorating his childhood home.

Fluxus Festival – a fiesta of freedom

Mačiūnas Square is the starting point of the Fluxus Festival – a yearly celebration of the creative and rebellious spirit of Fluxus. Every September, Kaunas residents and guests create kooky costumes and build quirky props to climb the Parodos Hill in a Fluxus fashion. This year, Fluxus festival organisers will offer participants costume workshops taking place starting from September 9 in various locations in Kaunas and Kaunas district.
Parodos Street – usually a busy road – is closed off for exactly 22 minutes so this unusual procession can climb it. Methods include climbing backwards or on a surfboard, carrying a friend or a goldfish bowl, rollerblading, and others – the weirder the better.

The Fluxus Festival is one of the greatest successes of the Kaunas 2022 programme.

At night, the programme will present a breathtaking show created by local communities together with Walk the Plank (Great Britain) and other impressive performing groups.

This year, costume making process will be coordinated, with costume workshops taking place starting from September 9 in various locations in Kaunas and Kaunas district.
On that day, there will be a total of over 30 performances, 7 light installations and almost 400 acts by Kaunas city and Kaunas district community members. According to the Fluxus coordinator Simona Savickaitė, the Fluxus movement members were not afraid to base their creativity on chance and play, which is perfectly reflected in the atmosphere of the event and people's mood. Each year, the Fluxus Festival becomes a kind of adventure that everyone can embark on.