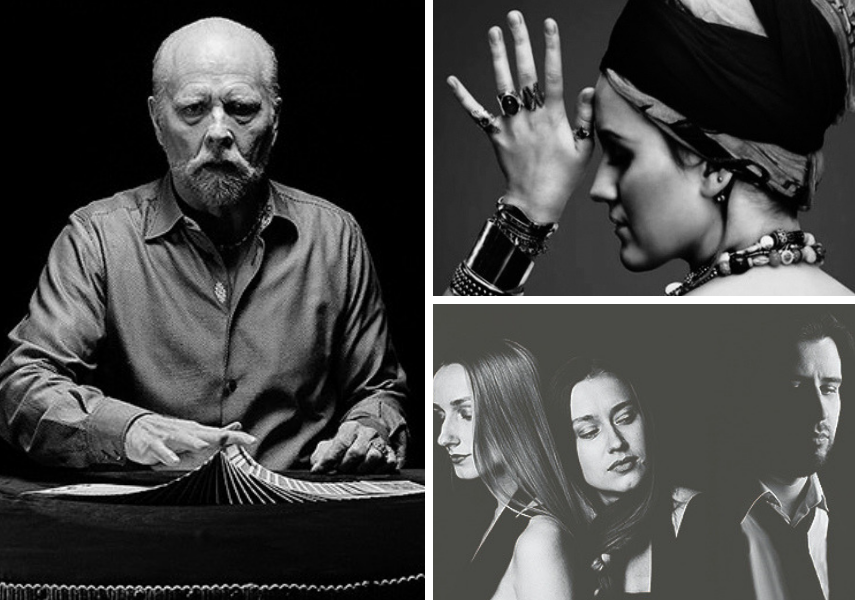 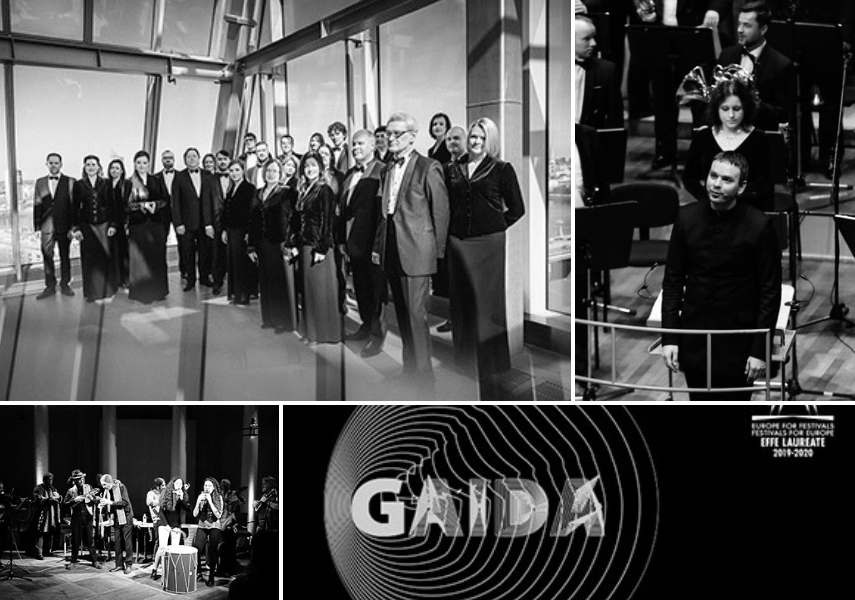 Sixty-two-year-old Richard Turner is renowned as one of the world’s greatest card magicians, yet he is completely blind. In this documentary, Richard tra-ces his journey from his troubled childhood, when he began losing his vision, to the present day, as he relentlessly pursues perfection while struggling with the reality that his biggest weakness might also be his greatest strength. The screening starts at 18:00 and is free of charge.

The festival focuses on the Oriental culture and its relations with early European, primarily medieval culture. The goal is to create an artistic whole in which the topics are handled in depth from different viewpoints. A typical feature of this festival is the format of a double concert, with an ensemble from Europe playing during the first part and an ensemble from Asia during the second part, concluded with a final joint improvisation of both ensembles. The concerts take place in different locations in Tartu. More information can be found on the festival’s Facebook page or at www.festivitas.ee

This is an exhibition that is simultaneously physical, reacting to strong emotions, and loud, almost screaming. It is painful, funny, poetic and cruel and points to one possible way of being an artist nowadays. “Lyddon’s bodies bulge, bleed, shift, seep and drool. Their abject flesh-filled with solid blues, pinks and greens – is restless, active and consuming. While the bodies that inhabit the spaces of Angela Maasalu’s paintings and drawings have a sparser, scratchier quality, color also determines the narrative or emotional intensity of the work, which powerfully re-imagines fragments of autobiographical experience. The “heart” – inasmuch as it connects to desire, humiliation, vulnerability and loss – becomes the organ of the work as it were, a throbbing machine of visual translation”, Alice Butler says about the exhibition. Learn more about the exhibition at www.kunstihoone.ee

The theatre festival ‘Golden Mask in Estonia’ is one of the most important theatre events in Estonia. The interest in the best productions from Russia will unite Estonian and Russian audiences and offer an exclusive opportunity to meet the nominees and laureates of the festival’s most recent season. To find out more please visit the festival’s official web page www.goldenmask.ee

17th International Contemporary Music Festival ‘AFEKT’ is a sequel to the Estonian Composer Festival that has been held in Tartu for the past 15 years and has also expanded to Tallinn in the previous years. The aim of the festival is to bring contemporary European musical environment to the Estonian viewers and the name change has been brought on firstly due to the gradual expansion of the festival into an international musical event. For all official information please visit the festival’s Facebook page or www.festivalafekt.ee

The first part of the season opening concert will be dedicated to the 100th year anniversary of the orchestra’s former conductor Mendelis Bass, where his original music will be performed, as well as music by such composers as G. Verdi, G. Puccini, G. Bizet, A. Ljadov and R. Shchedrin. The second part of the concert will serve as small insight into the orchestra’s new album with music composed by Jekans Jancevskis, Vilnis Smidbergs, Andris Sejans and Ilone Brege. To find out more about the concert and to purchase ticket please visit www.bilesuparadize.lv

During this special week, Riga’s restaurants open their doors to all gourmands willing to treat themselves to an array of delicious tastes for an especially affordable price of 15-20 Euros for a three-course meal. For the entire week, all the city’s residents and guests have the chance to enjoy the season’s best foods prepared by experienced and innovative chefs who give each meal a modern and sophisticated twist. To see what restaurants are participating please visit www.liveriga.com

During this cycle or sacred music, the Latvian Radio Choir will perform essential pieces of sacred choral music. The concert will feature compositions by Brahms, Mendelssohn and Latvian composers Maija Einfelde and Andris Dzenitis, performed by organ player Ilze Reine. The main content axis of the concert will be lyrics from the classic Ave Maria. However, this time it will be performed four times, in very different versions by all four authors. The program will focus on Johannes Brahms and Felix Mendelssohn-Bartholdy’s choral music, an integral part of the genre canon. Both composers were outstanding masters of choir traditions, experts in the works of Bach and other great authors, who with their understanding of sound and their unique language of music and their lively, openly emotional attitude to the lyrics, have opened new horizons for choirs as an instrument. Meanwhile, Maija Einfelde is sometimes characterized as a 19th century person because of the fact that her music really fits in well with the works of the great 19th century masters. This time, the role of Andris Dzenitis’ music will serve as a counterpoint, a contrast – the fragmented perception of the modern man, harsh, unanswered questions. To learn more and to buy tickets please go to www.bilesuparadize.lv

The artist presents to his viewers yet unseen works, as well as well known paintings in a new light. Juris Jurjans’ art is like an exclusive drink, which over the years has become more valuable and finds new nuances of taste that can be enjoyed by a true art connoisseur. The painter is interested in life; his artistic motif is love, which is rich in gradation and is all-encompassing. Juris Jurjans is aesthetic in life and in art, and with gold in his hands he gives a new meaning to everyday things, elevating them to a sacred level. Birds, flowers, beautiful ladies, the sun, the moon – gold and silver – reality shines in a new light, it is expressive and dynamic. The entrance to the exhibition is free.

The Riga International Film Festival (RIGA IFF) paints a wholesome picture of the most daring and important European cinema of today, and allows for successful curation of Latvian film within a larger context. The festival features several competition programs, headed by a multi-genre feature film competition within which an international jury chooses a title for the RIGA IFF Award. More than 100 screenings in 11 film sections will run along with lectures, discussions and other events, gathering hundreds of international film professionals in Riga. Part of the festival’s infrastructure is the legendary cinema Splendid Palace (member of Europa Cinemasnetwork), it hosts most of the film program and events. The screenings are held also in the film theatres K.Suns and Kino Bize as well as the Latvian National Library and Kanepe Culture Centre. More information on the festival's film sections, competitions and ticket policy can be found at www.rigaiff.lv

GAIDA is a festival that strengthened the international reputation of the Baltic countries in the sphere of contemporary music and set the bar high for quality. Compared to last years’ programs, in 2019 the audiences of the GAIDA Festival shall experience even more performances by prominent, internationally acclaimed artists: the list includes piano and electronic music celebrity of the new generation Francesco Tristano, Canadian music sensation Tanya Tagaq, GRAMMY laureates, famous American percussionists “Third Coast Percussion” who will be presenting new work by Philip Glass, British band “Icebreaker” with the Lithuanian premiere of Brian Eno’s legendary work “Apollo”, outstanding electronic music artists Andy Stott and Max Cooper, the most famous contemporary British composer and conductor Thomas Adès, prominent Russian-born American pianist Kirill Gerstein. The festival shall be concluded with the Lithuanian premiere of “Music for Ensemble and Orchestra” by the legendary American composer Steve Reich, which was first presented at the end of 2018 in Los Angeles and London. Concerts featuring the aforementioned artists have already been widely announced to the public. In 2019, alongside regular concerts, GAIDA will also offer some exceptional events. Perhaps the greatest novelty of the program comes in the shape of three impressive audiovisual projects, which shall be shown throughout the festival for almost two weeks: international stars of contemporary art Žilvinas Kempinas and Justė Janulytė have supplied the festival with two new mutual works “Skycity” and “Waves”, while video artist Vaclovas Nevčesauskas and composer Vytautas V. Jurgutis have created a unique audiovisual mechatronic project “Quantonom”. Together with the National Gallery of Art, GAIDA is presenting world premieres of all these 3 works, which will be shown in separate performances (one ticket is valid for all three projects). Almost all events of the festival, with the exception of the final concert at the Vilnius Congress Concert Hall, shall be presented at the National Gallery of Art, in a specially constructed concert space in the Great Hall of the Gallery. All official information is available at www.vilniusfestivals.lt/gaida-2019-2/

First of all – this is a project of awfully good music. Sensitive, sexual, rhythmic, professional... Creation by Erykah Badu embodies everything what may be good in music. Secondly – an excellent team has been created: during the concert you will see how John “shells” sixteenth note rhythms; Tomas twists synthesizers, not to speak about the awesome Marija Monika. You have to see this. To learn more please go to the event’s Facebook page.

Inconvenient Films is an international competitive human rights documentary film festival, taking place in various cities and towns across Lithuania. Established in 2007 as an annual film event, it is currently the biggest documentary film festival in the country and the only film festival of this kind in the Baltic States region. The festival invites filmmakers, experts, activists and festival audience to appreciate and discuss the role of documentaries in reflecting and shaping our understanding of reality. The mission of this festival is to use award winning author driven films in raising awareness about human rights issues around the world, encouraging public debate on ways to address them. Festival’s International Competition is dedicated to the films by new filmmakers – their first or second feature documentary. Films are selected considering artistic value, filmmaking skills and revelation of a relevant human rights topic. The Best Film is selected and awarded by international jury. This year’s festival theme is Borders. Every day we consciously or unintentionally build walls and divide people, things and animals into US and THEM. Such walls are sometimes very subtle and invisible, and sometimes, very solid or even physical. Where does US end and THEM start? The boundary is a constantly moving and continuously reconsidered one. All films screened during the Inconvenient Films festival are eligible to win the Audience Choice award. The winner of the award is chosen directly by spectators. For more information and ticket purchase please go to www.nepatoguskinas.lt

Hear the wave of contemporary jazz and improvisational music flood the city. This is a rare opportunity to see some renowned foreign jazz performers in Lithuania, discover musical innovations, hear the rising stars and get a taste of jazz avant-garde. Dive into the free spirit of the festival and choose from a multi-media program that will pique your curiosity. To learn more please visit www.vilniusjazz.lt and tickets can be purchased online via www.bilietai.lt