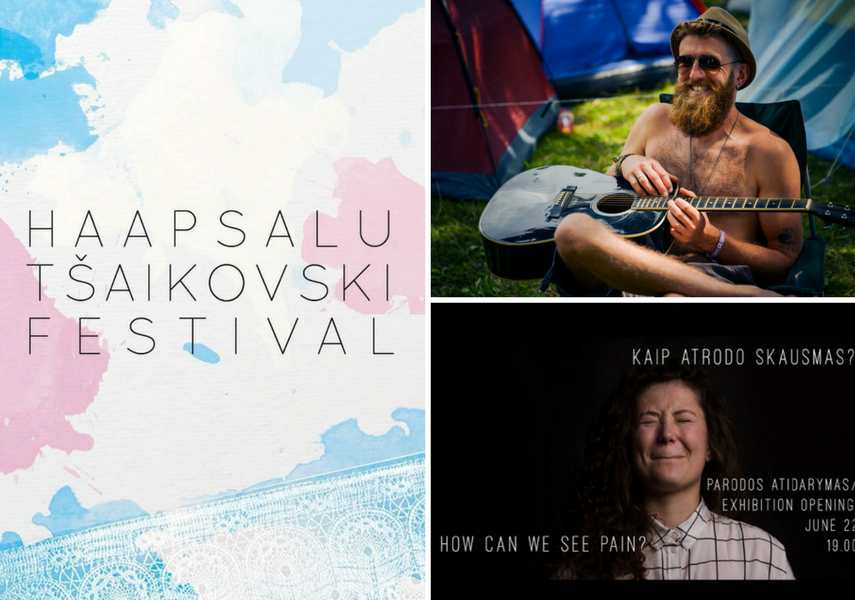 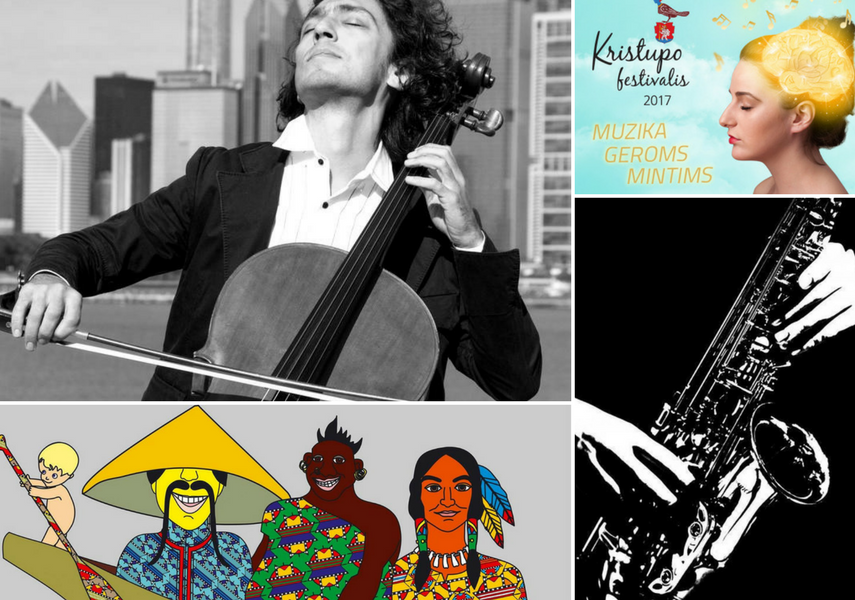 The first classical music summer event – Haapsalu Tchaikovsky Festival – is before you: come and listen to the classical concerts by the leading Russian theatre Moscow Novaya Opera in the Haapsalu Castle Yard, experience the chamber concerts, the thematic walks on Tchaikovsky’s paths, the children’s concerts and, of course, the Estonian National Ballet’s grand open air performance “Swans” on the lake Väike Viik in Haapsalu. Haapsalu and Tchaikovsky go together like the sea and the wind! Find out more at

This festival brings to Pärnu saxophone players and enthusiasts from all over Estonia and around the world. Concerts are held in venues around the city, making the most of the urban space and the people visiting it. Master classes are held for those interested in the art of playing the saxophone. Please go to www.saksofon.ee to get full information on the festival.

The Medieval Days take place in Tallinn’s Old Town every year and are one of the most important annual events of the Estonian Folk Art and Craft Union since the year 2000. During the Medieval Days, you are able to feel the atmosphere of the flourishing Hanseatic era. A large medieval market is set up in the Town Hall Square with merchants and workshops. Musicians and dancers from near and far take the stage. A medieval procession opens the event followed by various workshops, excursions and theatre performances. The children’s area is situated on the Niguliste Hill where children can participate in workshops, knight tournaments and other exciting activities. Learn more about the festival at www.folkart.ee/en/events/medieval-days-tallinn-old-town/

Founded in 1987, the Pärnu International Documentary and Anthropology Film Festival is the oldest of its kind in the Baltic countries. The initiators of the festival were Lennart Meri, the writer and President of the Republic of Estonia, and Mark Soosaar, documentary filmmaker. One of the main themes of the festival has always been the survival of indigenous peoples and their cultures. But the screening program also includes social interpretations of contemporary society, portraits of interesting people and human relations, as well as films on music and art. Only documentary films and videos of high value and quality, recording human activities in social, historical or ecological context are accepted for competition screenings. More information about the festival is available at http://www.mona.ee/filmfestival/index.htm

An international contemporary jazz and improvisation music festival Rigas Ritmi is one of the most attended and loved music festivals in Latvia, and is one of the main music festivals in the Baltic States. It is recognized in Europe and elsewhere around the world. The festival’s stages at different locations in Riga feature both world famous and award-winning, as well as young and undiscovered musical talents. Learn more about the festival and program at www.rigasritmi.lv and buy tickets online via

Worldwide short-length film festival Future Shorts will take place on June 30th and July 1st in the industrial creative quarter Spikeri in Riga, with stunning views of the Old Town, presenting the summer program’s best international films of this season. During the festival, the audience will have a chance to watch the best 8 festival films of 2016 and 2017 from participants and winners of the biggest international film festivals from around the world – among them are: the USA, the UK, Columbia, Finland, Norway and Croatia. The Festival’s partners will present valuable prizes among audiences and true cinema lovers. Traditionally the voting process for the best films of this season takes place immediately after screening and via the festival’s social network. Full info on the festival is available at www.futureshorts.lv

Open till July 02, Exhibition by Synchrodogs "Back to Nature" ,Contemporary Art Center, Riga

Synchrodogs is a Ukrainian artist duo Tania Shcheglova and Roman Noven, whose surreal photographs have gained them international recognition both in the fashion and art worlds. The eye-catching images, often featuring Tanya herself in various unusual poses and costumes within picturesque landscapes, cannot be rationally explained. Their work balances between the real and imagined, drawing the viewer into an unconscious, wild and dream-like world. Their creative career is also a force of nature – a myriad of publications in fashion and style magazines such as Vogue, Vice, Esquire, Dazed, and even collaboration with Lady Gaga has undoubtedly made them the most fashionable Ukrainian photographers around. Official information can be found at www.rigasfotomenesis.lv

The annual Early Music Festival will take place in Riga and Rundale – a colorful celebration of early music for the entire family. The festival offers to get a feel of the Medieval, Baroque and Renaissance periods. Its concerts will be held in Old Town Riga's churches and concert halls with the grand finale in Latvia's most magnificent Baroque palace – Rundale. Splendid costumes from olden days, early instruments, authentic performances and fireworks will be part of the entertainment. For a program of the festival, please go to www.smf.lv and buy tickets online via www.bilesuparadize.lv

In the very height of summer, on July 7th, the new summer exhibition season will be opened at Daugavpils Mark Rothko Art Center showing local and international art projects. The new exhibition season will surprise with a variety of projects: paintings, graphic art, glass art and photography. The retrospective by an outstanding Israeli artist Moshe Kupferman will be seen from 7th of July at the Rothko Center, highlighting the artist's style and persistence as abstract painting and graphics reveal the master's contribution to Israel's cultural space. Additionally, two Latvian photography projects, Andris Zegners In the Light and Iveta Vaivode Sword Lilies, as well as Maija Dragune’s lithography, setting the graphics process and the importance of continuity in the development of art, Marta Gibiete’s glass art project The Travelers updating the artist's virtuosity and creative flight in a transparent and fragile material and Arturs Berzins’ solo exhibition Feeder, telling about today’s allegories and directness through paintings and installations – will all be exhibited during the summer season at the Rothko Center. Learn more at www.rothkocenter.com

This project talks about pain, an emotion that is often found in our close environment: people feel emotionally low or have strong emotional pain, but most of the time no one ever notices, for one simple reason – the inner pain usually stays inside. But, what if we could see the inside of people that suffer pain? Seven people were invited to participate in the experiment, where each of them was given an easily deformable object. With the consent of the participants, they were made to feel a mild physical pain, while expressing it through the given objects. Intact and damaged objects symbolize pain that can be found inside all of us, it can change our psychological and even physical state, but is not always recognized by the outer world. They represent the connection between physical and emotional pain and how they interchange, where physical pain affects our emotions, and inner pain damages us or others physically. Through the contrast of ‘healthy’ and damaged items, these photographs give some food for thought: the irreversible damage pain creates, and how it can be stopped without spreading it around. The entrance to the exhibition is free of charge.

Two talented artists, Ramunė Savickaitė-Meškėlienė and Mantas Meškėla, one painting flowers, the other historical Old Town buildings, show similarities in their colors, illumination and highlighting. The entrance to the exhibition is free of charge. To find out more please visit www.savickogalerija.lt

The Christopher Summer Festival welcomes its 23rd summer this year. For over two months (July and August) several dozen concerts will be presented, ranging from timeless classical masterpieces to unexpected stylistic combinations. For its artistic quality, friendly atmosphere and openness to creative ideas, it has received serious acclaim, most recently being recognized with the EFFE Label. The motto of the Christopher Summer Festival is “all genres are good, except for the boring ones.”And so this year, a limitless variety of music will be played: from the world’s beatbox champion to cellos of the future, from ethnic jazz directly from the volcano’s crater to stars of the global flamenco scene, from classical masterpieces to music from Mali arranged for the guitar, from the heart-stirring magic of Portuguese songs to early Spanish dances. Hundreds of performers will share their talent, warmth and energy at the concerts. All you’ll need to do is select your favorites and get ready for an unforgettable wave of emotions! Full information on the festival’s program and more is available at www.kristupofestivaliai.lt and for ticket purchase please access www.bilietai.lt

A long-running lakeside blues and jazz festival that’s raucous fun for everyone, Bliuzo Naktys is the oldest open-air summer music festival in Lithuania. The sounds of guitar, harmonica, drums, saxophone and other instruments, together with strong vocals, invite visitors to listen to real blues at least once a year, and also spend some quality time with loved ones in the beautiful countryside of Varniai. The festival welcomes not only Lithuanian musicians, but also bands from all over the world: the USA, the UK, Denmark, the Baltic States, etc. What usually happens is that the guests and artists don’t want to leave the festival territory, simply because of its amazing atmosphere! A lot of visitors of Bliuzo Naktys consider coming to the festival together with their family and friends as an annual tradition. The festival may be called a Lithuanian version of the legendary festival Woodstock: hippy atmosphere, relaxed visitors, and the feeling of peace and love floating in the air, makes everyone feel like one big, happy family. Learn more about the festival at www.bliuzonaktys.lt

Heeding the call of production company Arts Libera International, the famous violoncello artist and composer from the United States, Ian Maksin, is coming to Lithuania. An excellent soloist and participant in a wide variety of international ensembles, the artist has traveled and performed in over 30 nations of the world, playing together with other world-renowned musicians such as Andrea Bocelli, Sting, Gloria Estefan, Barry Gibb, among many others. Ian Maksin possesses a unique charm, allowing him to play out classical music with orchestral accompaniment, solo jazz or rock in a fresh and unique way, enchanting audiences all over the world. Now, the artist will join forces with Lithuania’s guitarist Martynas Kuliavas to unleash the magic of music in three Lithuanian cities. The artist admitted that performing together with famous guitar virtuoso will be a fresh challenge for him, one he’s been anticipating for a long time. All fans of true art and unmatched musical skill are invited to come and experience the magic of music firsthand. More info is available at www.artslibera.com/projects/