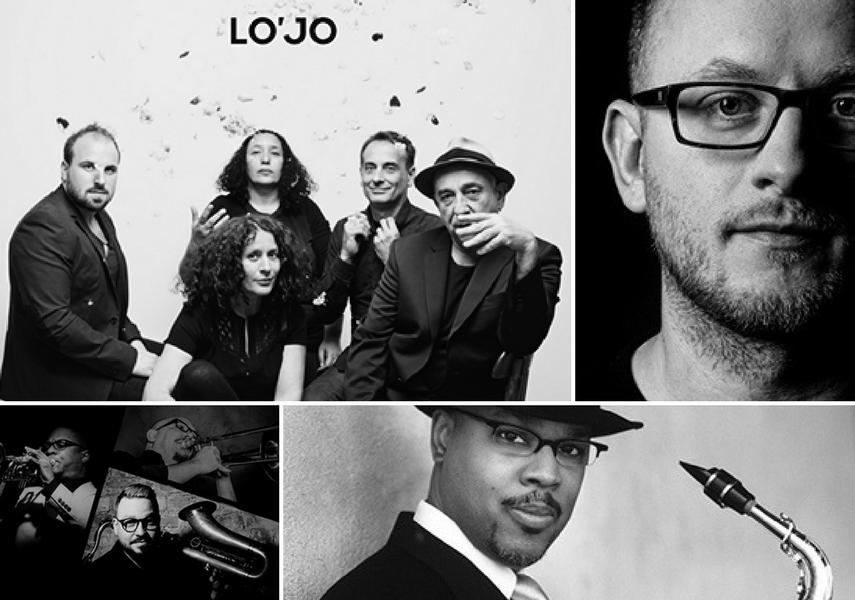 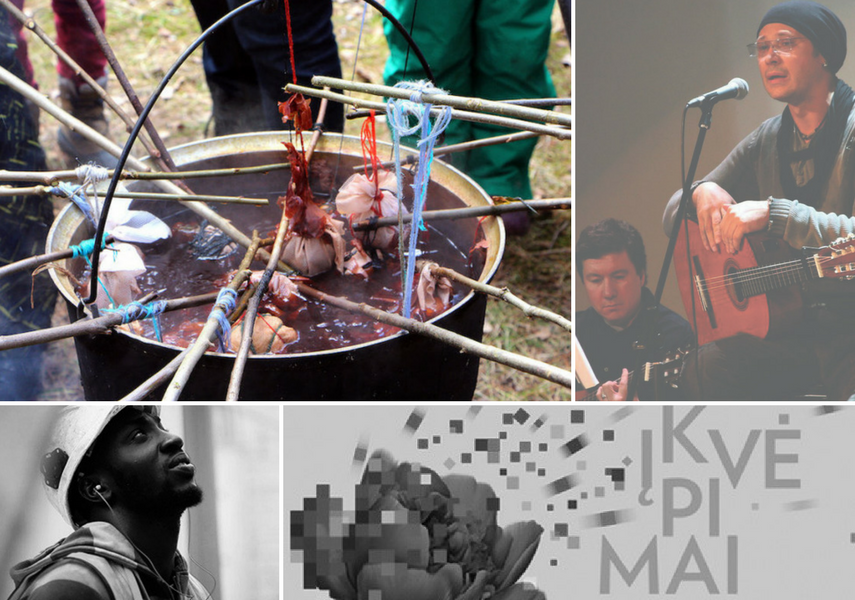 The artworks of this exhibition have been produced honouring the meaning of collaboration since the groups of artists are composed of MA students from Aalto University and from the Estonian Academy of Arts, which adds to the exhibition a reflection about the risks, potentials and failures of cooperation between artists and institutions. For the exhibition, students have engaged with how misbehaviours and things out of place constitute a terrain of experimentation, addressing different meanings of systems, randomness and dead ends.

March 7. Kumu Documentary What We Have Made, Kumu Auditoirum, Tallinn

Shot in wonderful black-and-white, What We Have Made captures the choreography of a large building site. Everybody plays their role ingeniously as the building slowly takes shape. Small portraits show construction workers talking about their work, their highs and lows, and about what the building site teaches them about life. There’s never been a better film about the life of a building site. The film is in French with English subtitles. For more information, visit www.kumu.poff.ee.

TAFF Club was initiated by the Tallinn Philharmonic in 2012. The main style of the club is mainstream jazz. Additionally, there are special events of different styles. This season will bring two new series to the TAFF Club audience. The first is ‘Persona’, which focuses on the creation of beloved Estonian jazz artists. The second is ‘Neighbours’, where some of the best jazz musicians from neighbouring countries will perform. This season brings guests from Finland, Russia and Latvia. The president and artistic director of the club is the recognised saxophonist Raivo Tafenau. TAFF Club opens its doors every two weeks on Thursdays or Fridays at 20:00 at the Basement Hall or the White Hall of the House of the Blackheads. Read more at www.tallinnafilharmoonia.ee/en/mustpeademaja/concerts/taff-club.

Estonian music videos are shown on big screens in two halls, each with a different ambience. The event takes place in the Valga Railway Station, one of the prettiest in the country. The best Estonian music video will be named, based on the opinion of judges and guests. After the festival the railway station turns into a big nightclub with DJs. The festival begins at 19:00. Official information can be found at www.muvi.ee.

The 5th Ceciliana Music Festival aims to draw attention to professionally performed early music and to provide a high quality music experience to the audience. Concerts and master classes are held during the festival, where, in addition to the students and lecturers of the Estonian Academy of Music and Theatre, well-known foreign interpreters and pedagogues including Tuuli Lindeberg (soprano, Finland), Eero Palviainen (lauto, Finland), Bolette Roed (block flute, Denmark) and Arek Golinski (Baroque, Denmark) will perform. The artistic director of the festival is the well-known figure Imbi Tarum. Venues: Estonian Academy of Music and Theatre, Great Guild House, Kadriorg Art Museum. Entrance to the festival concerts is free of charge or with a museum ticket. For more information, see www.ema.edu.ee.

The Tartu World Film Festival is primarily dedicated to documentary film art and creative documentary filmmaking, which aims to build a bridge between filmmakers and their audience. The festival is interested in the anthropological and analytical approach to humans, cultures and societies. During one week, the screened films take the audience to all continents and introduce a number of ‘aliens’ with whom it’s possible to get acquainted. In addition to the films screenings, special programmes, exhibitions, workshops and meetings with filmmakers will take place. On the night of Mar. 24 there’ll be a sound festival, Estonian National Museum’s Night Turns Into Day, where musicians from Estonia and abroad create different soundscapes. Official information is available online at www.worldfilm.ee..

The music of the Lebanese-born Armenian composer Tigran Mansurian involves modernism and minimalism, and it’s equally well known by cinema fans and concert audiences alike. Mansurian has composed a few vocal and instrumental compositions, and those that he’s presented are very vivid and capacious, revealing elements of Armenian national sounds therein. Mansurian’s 2011 composition Requiem will be performed by the Latvian Radio Choir and Sinfonietta Riga, and will be conducted by Sigvards Klava. For more information, see www.latvijaskoncerti.lv. For tickets, go to www.bilesuparadize.lv.

At the opening event of the VEF Jazz Club three excellent soloists will take to the stage, a local jazz hero in the guise of the internationally acclaimed saxophone player Deniss Paskevics, one of the best Italian trombone players Beppe Di Benedetto and the African-American trumpeter Jason Hunter, who together will perform a range of jazz classics as well as some of their own compositions. The unique sound of the three wind instruments have been created through long-term cooperation between the musicians, which has given birth to a completely new sound and original music taking into account the musical traditions of the three composers’ countries of origin. The soloists will be accompanied by some of Latvia’s best jazz musicians including the pianist Atis Andersons, the contrabass player Andris Grunte and the energetic drummer Janis Jaunalksnis. The concert will be a rare opportunity to hear modern jazz music being played simultaneously with the saxophone, trumpet and trombone. For more information, see www.vefkp.lv. For tickets, go to www.bilesuparadize.lv.

Greg Osby, the world-renowned American saxophonist, has been praised by critics and music lovers for over 20 years with his modern musical style. The musician skilfully moves between lyrical, rhythmic and harmonious compositions, creating an unusual and unforgettable sound. The outstanding jazz musician received the Jazz Journalists’ Association Award as Best Alto Saxophonist for four consecutive years between 2000 and 2004 and has released a total of 15 albums on the prestigious Blue Note label. In addition to his active musical career, Osby devotes much time to educational activities. He’s worked as a lecturer in jazz music at the Baltimore and Philadelphia Music Schools and the Berkeley College of Music, and has also led master classes and lectures at the most prestigious world music academies, including Harvard University. For information about the event and to buy tickets, go to www.bilesuparadize.lv.

In this exhibition, called Great Loneliness, Arturs Berzins’ works fluctuate between looking for seriousness in content and playing with cognitive features through form. As usual in the works of Arturs Berzins, the obviously clear message in his images is most likely deceptive and holds a double bottom with an opposite meaning, as is everything we face in this period of information wars. The exhibition plays with the exchange of various values, manipulation with society’s consciousness and types of populism which are based in the immanence in people, thus bribing our minds in large numbers as well as pointing out the price each individual pays, namely the great loneliness of the Western person. Entrance to the exhibition is free. For more information, see www.makslastelpa.lv.

In this chamber music programme from the LNSO musical ensemble the audience will hear Khalil’s Arabian world music, Kronlaks’s musical conversations and a fitting quartet by Schnittke with reverberations of renaissance (Orlande de Lassus sacral music), a ghost of Beethoven’s classicism (The Great Fugue, op. 133) and an exposition of postmodernism (Shostakovich’s monogram DSCH). Laima Jansone, author of a new work, will also participate in the performance with acoustic and electric kokles, gongs and bells, as well as DJ Monsta whose intellectual diversions continually avouch his great taste and boundless creativity. To find out more and to buy tickets, go to www.bilesuparadize.lv.

As the spring equinox approaches and the day finally becomes longer than the night, according to Latvian traditions the Latvians will hang and decorate traditional swings, sway, sing, dye eggs with onion skins, conjure, swat each other with willow catkins, play games, dance, glorify the sun and promote liveliness, health and beauty all around us. Come and join in! For more information, see www.brivdabasmuzejs.lv.

Lo’Jo is a legendary sextet from France and not seeing them perform is almost indecent. The band’s been playing together for more than 30 years during which time they’ve released 15 albums. They also started a legendary Festival in the Desert event in Mali and have performed in many exotic locations around the world. The band’s music is always evolving and reminds us that people also evolve, change, progress and rebel. So be prepared to be amazed even if you’ve seen them performing before. Life is a constant change, and Lo’Jo is using their unlimited possibilities to travel into unknown and unexpected ways of music. Lo’Jo’s music is a variety of African swing, Berber blues and gypsy dances, a music with an aura that can’t be mistaken with any other. Lo’Jo’s songs are intriguing and full of poetry. They’re accompanied by piano, violin, Korean zither, trumpet sounds and other exotic instruments that are the trophies brought home form their musical wanderings and adventures in the Sahara, Tbilisi, Caucasus, Reunion, Argentina, Nepal and other unexpected places. For more information, see www.gmgyvai.lt. For information about tickets, go to www.tiketa.lt.

This year, the Kaziukas Fair will be 415 years old. The event is distinguished not only by the abundance of events and entertainment, but also by a coin specially created by the artist Rytas Jonas Belevicius which will become a symbol of this year’s fair. The total length of fair, which takes place in the old town, is about 17km. In 1602, Pope Clement VIII announced Prince Kazimieras to be a Saint. In 1827, Vilnius traders received the privilege to organise the three-day St. Kazimieras fair, which is now recognised as one of the biggest and most authentic fairs in the Baltic States. The official opening ceremony takes place on Mar. 2. Entrance is free of charge.

Vilnius International Film Festival (Vilnius IFF) ‘Kino Pavasaris’ is unquestionably one of the most anticipated annual cultural events in Lithuania. Now in its 23rd year, it’s the largest cinematic event in the country and is known and loved for its high quality film programme and rich accompanying package of cinema-related events, workshops and special initiatives. Each year Vilnius IFF presents more than 200 films divided into a range of categories from Masters and Critic’s Choice to Hot Documentaries, Shorts and much more. Find official information online at www.kinopavasaris.lt.

Tigran Hamasyan’s strong jazz improvisations and rich folklore traditions evoke the sounds of his native Armenia. His concerts enchant listeners with originality and beauty and the performer always leaves the stage to continuous applause. Tigran surprises not only with instrumental talents, but his voice which is subtly adapted in compositions. Buy tickets online at www.bilietai.lt.