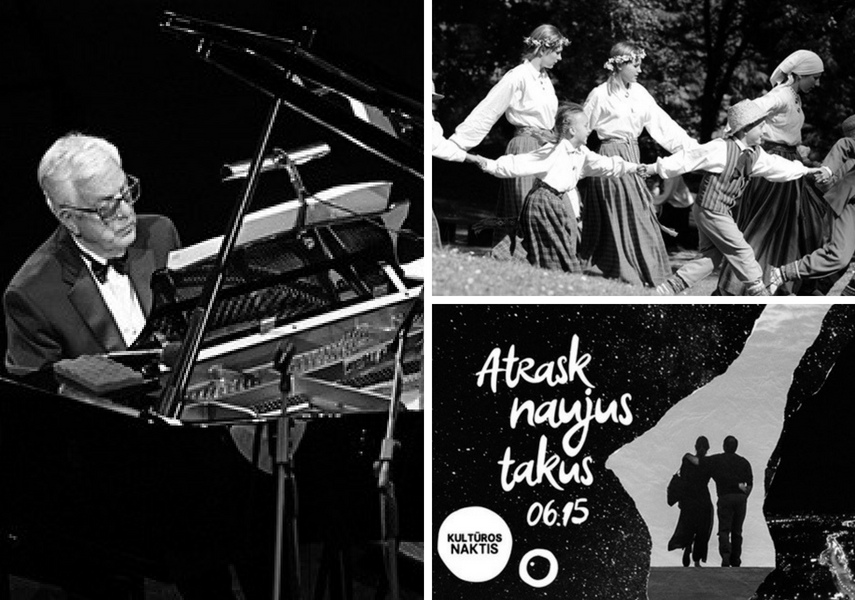 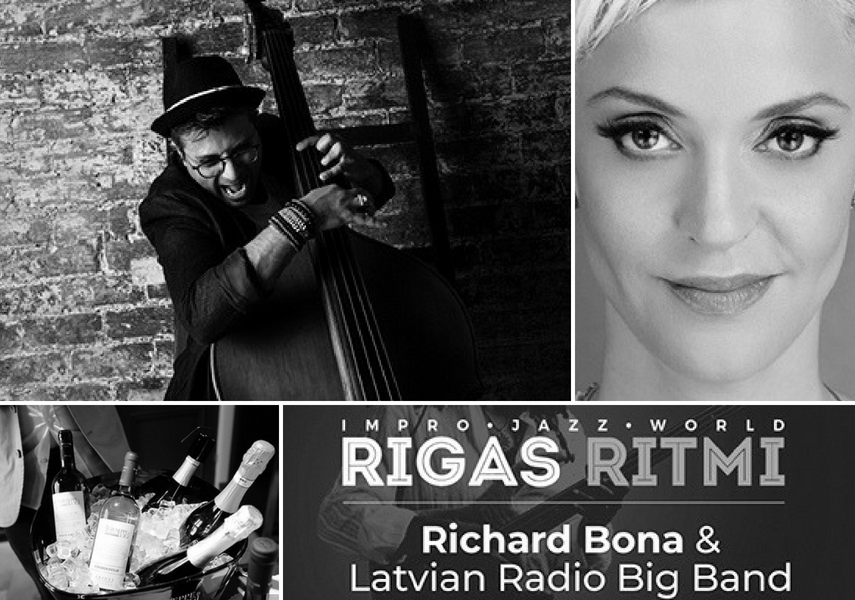 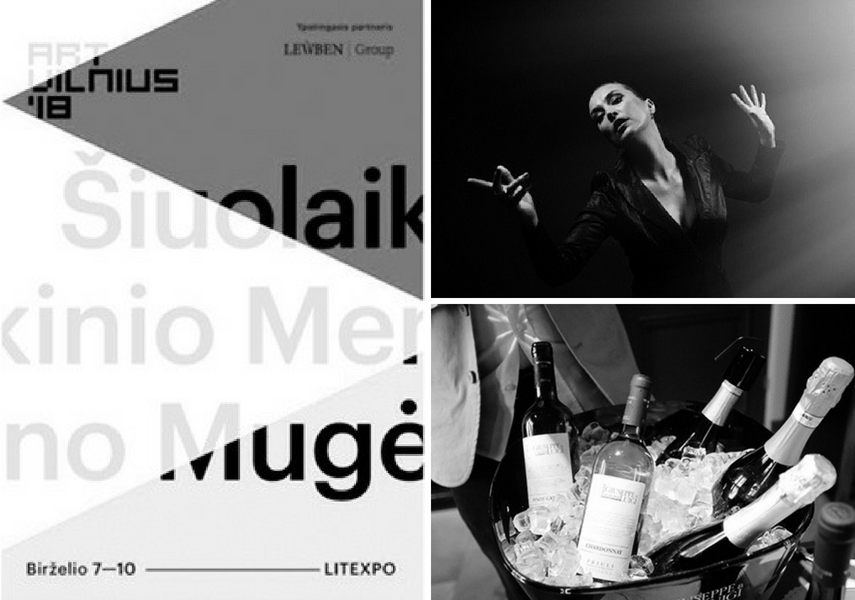 Tallinn Old Town Days is the biggest festival in the Old Town dedicated to local cultural heritage and community. Various music, theatre, art, and sports events are held over five days for locals and visitors alike. Both old and young guests can explore the courtyards of the Old Town, learn about the long and impressive history of Tallinn and participate in various activities. The festival, which has been held since 1982, celebrates the beginning of a beautiful summer. For more information about the festival see www.vanalinnapaevad.ee

The idea for the Italian Wine Party began with the introduction of Haapsalu’s twin town, Greve in Chianti. Wine is offered by the majority of Estonian importers as well as by their Italian partners. The Italian Wine Party begins on Friday in Haapsalu’s cafés with Italian wine tastings. On Saturday, a wine contest will be held in Haapsalu’s Old Town which will reveal the favourite Italian red wine, white wine and Prosecco in Haapsalu. Italian singer Pupo will be the main performer at a concert that takes place on the Saturday evening in the courtyard of Haapsalu Castle. Find out more at www.kultuurimaja.ee

Grillfest takes place every year in June in a beautiful meadow by Vallikaaru in Parnu. For two days, some 300 caterers from Estonia and abroad serve their best fare. There are outdoor restaurants, cafes and even a pet restaurant. Guests can enjoy the Good Food Fair, the national fishing championships and food preparation competitions. A large and exciting play area is available for children.

The festival has performances by excellent artists on various stages offering music to suit every taste. Both days of the festival end with a magnificent firework display. After Grillfest parties take place at local festival clubs. Everyone is welcome to Grillfest, and entrance is free of charge. For more information about the event, see www.grillfest.com.ee/eng

Until Jun. 10. Katja Novitskova, ‘If Only You Could See What I’ve Seen with Your Eyes’. Kumu Art Museum, Tallinn

The exhibition takes the visitor into the world of living machines, patterns imprisoned in synthetic materials and two-dimensional sculptures of genetically modified life-forms with a daring typical of the dystopian realm. Katja Novitskova’s oeuvre is located at the crossroads of visual culture, digital technologies and speculative fiction. She’s interested in how the rapidly developing planet is increasingly more dependent on various data flows, which intermediate, preserve and alter the environment that surrounds us in visual form. The display is an immersive environment interpreting and looking back at the current day from the future, where the world as we know it is no longer recognisable. For more information, see www.kumu.ekm.ee/en/syndmus/katja-novitskova

Soru Jazz is a summer jazz music festival with a cosy atmosphere that brings together a number of well-known and acknowledged Estonian musicians to Hiiumaa over three days. In addition to good music and company, Hiiumaa itself is an asset with its beautiful ports and lovely people, all of which have become the phenomenon of Soru Jazz and have given people a reason to come back year after year. Hiiumaa has, without a doubt, the best wind, sea, and sun in Estonia. If the weather’s nice, you can enjoy outdoor concerts on the grass. Read more about the festival at www.kaunismuusika.ee/soru-jazz/tutvustus/

Now in its second year, the Tartu Street Food Festival is a major international street food event which introduces some of the latest food trends. The festival offers street food from food trucks, pop-up street cafes, top restaurants and alternative chefs. As Estonia will be celebrating its 100th anniversary this year, the festival will focus on Estonian street food and its new flavours. More information about the event can be found on Facebook

The first part of the concert will see a performance of Sergei Rachmaninoff's Piano Concerto Number 2 by the brilliant pianist Andrejs Osokins, the winner of several international competitions. He’ll perform together with the Jurmala Festival Orchestra, which will be conducted by Martins Ozolins. The second part of the concert will feature a performance by the Latvian maestro Raimonds Pauls and the Latvian Radio Big Band and will be dedicated to Latvia’s centenary. Also performing ill be the soloists Kristine Praulina and Dinara Rudane. For more information, see www.dzintarukoncertzale.lv. To buy tickets, go to www.bilesuparadize.lv

During Latvia’s centenary, the Rigas Ritmi 2018 Festival will kick off with a concert featuring Richard Bona and the Latvian Radio Big Band. Grammy Award winner Richard Bona will be performing with the Latvian Radio Big Band for the first time ever, which has just returned from a concert tour of the United States. The programme ‘African Tales’ will feature compositions by Bona, arranged by the renowned Vince Mendoza. Special guest, percussionist Francois Archanjo. For more information, see www.rigasritmi.lv. To buy tickets, go to www.bilesuserviss.lv

As part of her Fado Bailado world tour, the legendary Fado singer Mariza will present her latest album, which allows the listener to return to the roots of Fado music, reminding listeners that the sound of the Portuguese guitar is an integral part of this music. The album was produced by the Spanish flamenco virtuoso and Grammy winning composer Havier Limon. Mariza’s debut album Fado Em Mim was a huge success and propelled the young artist to become one of the most popular Fado singers in Portugal. Her second album, Fado Curvo, was released in 2003, after which she became well known not only in her native country but around the world. Mariza has also recorded a duet with Sting, which was included in the official soundtrack of the Athens Olympics, called Unity. She’s released a total of eight solo albums, with over a million copies sold worldwide. To buy tickets, see www.bilesuserviss.lv

The Summer Solstice is the shortest night of the year and a day full of mysteries and traditions and is widely celebrated on Jun. 21. This year Jani (the name of the Latvian Summer Solstice celebrations) will be celebrated in Turaida with performances of folklore ensembles from various regions of Latvia. The Turaida Museum Reserve is a remarkable cultural monument with a history of over 1,000 years. During the shortest night of the year explore the chance to enjoy the magical feeling of the Summer Solstice by experiencing ancient traditions in nature. Learn more about Latvian traditions such as the strengthening of male and female power, decorating the yard, making flower wreaths, making cheese, singing folk songs, honouring the sun, bonfire rituals, dancing, scaring away witches, strength songs, collecting morning dew and welcoming the sun in the morning. For more information, see www.turaida-muzejs.lv

A jazz concert featuring the double bass virtuoso, multi-instrumentalist and online sensation Adam Ben Ezra, whose YouTube account has more than 7,000,000 views. The second part of the concert will feature the multinational musical collective Hejira. The interpretations of these musicians include influences of the cultural and musical heritage of Ethiopia, Chile, Germany and Hungary, musical tastes developed in the musicians’ home city of London. To find out more and to buy tickets, see www.bilesuparadize.lv

Over the years, Rigas Ritmi has deservedly gained a reputation as a world class music festival and continues to win the hearts of jazz lovers and has become one of their summer destinations in Europe. The double evening concert will feature the Grammy-nominated Cuban piano virtuoso Alfredo Rodriguez and the Scandinavian diva Beady Belle. For more information, go to www.rigasritmi.lv. To purchase tickets, see www.bilesuserviss.lv

Dedicated to the International Day for Protection of Children, Colorful is the right word to describe a concert marking the beginning of summer. It’s also a very important event meant to celebrate International Children’s Day. The music festival is for everyone and you’ll definitely feel that you’ve done something meaningful and joyful. Set in the marvellous Palace of the Grand Dukes of Lithuania, expect wonderful music, the 13-year-old cellist Rugile Jukneviciute, conducting guests from abroad and the irreplaceable St. Christopher Chamber Orchestra. A great way to start the summer! The concert is also the closing concert of a series of master classes set up in collaboration with Zurich University of the Arts and St. Christopher Chamber Orchestra. The concert will be conducted by young students of Johannes Schlaefli, one of the most renowned conducting teachers who taught such great figures as Mirga Grazinyte-Tyla, Patrick Lange and Christian Kluxen.

Entrance to the concert is free, although it’s necessary to register online at https://goo.gl/forms/VHbNZe3M8DRXVGHy1.Find more information online at www.facebook.com/events/101839004031041

Founded in 1997 by the Lithuanian National Philharmonic Society, the largest concert organisation in Lithuania, the Vilnius Festival has become one of the most notable musical events in Lithuania. With a primary focus on symphonic and chamber music programmes performed by established Lithuanian and international musicians, the festival also promotes contemporary Lithuanian music by presenting premieres as well as commissioning new large-scale works. The festival also collaborates with other European festivals. In the 20 years of its existence the Vilnius Festival has enriched the musical life of Lithuania’s capital and contributed to the development of cultural tourism. Full programme and more information online at www.filharmonija.lt

Featuring four days of art and discoveries with artists from around the globe, the international contemporary art fair ArtVilnius18 returns once again for its ninth year. The largest visual arts event in the Baltics has a broad programme to offer including hundreds of artists, thousands of fascinating artworks, encounters with stars of the art world, engaging discussions and a special educational programme. ArtVilnius18 offers a rare opportunity to see and purchase art from around the world, to get inspired and meet accomplished artists in person. This year, the art fair is dedicated to the centenary of Lithuania’s statehood restoration, and art from the Baltics will therefore be this yea’s primary focus. Visitors will also be able to see work from 55 contemporary art galleries and meet artists from France, Poland, the UK, Georgia, Latvia, Italy, Estonia, Denmark, Russia, Spain, Belarus and Ukraine. The full list of participants can be found online at www.artvilnius.com/participants. Buy tickets online at www.bilietai.lt

During Culture Night (formerly Let it be Night!) the squares, streets, parks and the most unexpected spaces in Vilnius are filled with various types of artistic projects including music, dance, theatre, cinema, photography, state-of-the-art installations and more. The one-night festival was first organised in Lithuania in 2007 as part of the preparation events of the Vilnius European Capital of Culture 2009 festival. Although during the very first year only 40 events were hosted in Vilnius, subsequent festivals have involved more and more events and gathered an increasing number of artists and participants, with last year seeing a total of 167 projects presented by 700 artists from Lithuania and abroad. Find more information online at www.kulturosnaktis.lt

The opera megastar and one of Europe’s most enchanting mezzo-sopranos Elina Garanca and the Vienna Philharmonic Orchestra, one of the best orchestras in the world, under the baton of the young conductor Rafael Payare present Vilnius with a sophisticated 19th- and 20th-century music programme. They open the musical heart of Vienna’s fin de siècle with Mahler’s vocal cycle Ruckert-Lieder (1901–1904) and the exquisite song Urlicht (Primal Light, 1893), which Mahler employed as the penultimate movement of his Symphony Number 2. The Vienna Philharmonic Orchestra will make its first appearance in Lithuania. It’s one of the oldest and most widely known symphony orchestras in the world. For more information, see www.opera.lt. Tickets can be purchased at www.filharmonija.lt