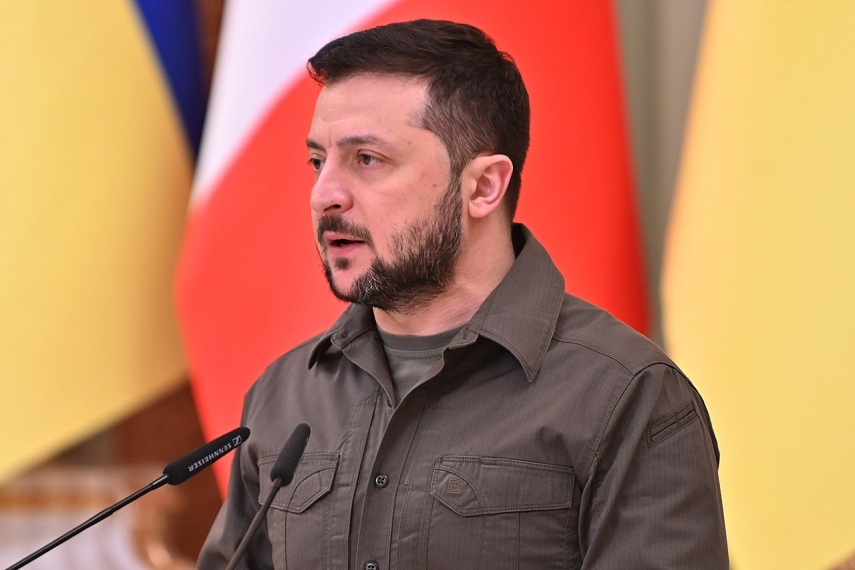 RIGA - Europe needs unity and strength to make Russia pay a full price for the war in Ukraine, Ukrainian President Volodymyr Zelensky said in his address to the Saeima today.

Zelensky started his address to Latvian lawmakers by thanking Latvia and its people for helping Ukraine. The Ukrainian president said that Latvians have recognized Ukraine's fight for freedom as their personal fight because the fate of all Europeans are being decided in Ukraine.

In Zelensky's words, Russia has started an armed offensive against Ukraine, threatening at the same also the freedom of neighbor countries. The battles in Ukrainian territory will decide what powers will be dominating Europe in the decades to come. The question is whether it will be justice that wins in this war or many nations will again see occupation, reprisals and deportations brought onto them by Russia.

"I am glad that Latvia has chosen to take the side of justice. On February 23 Ukraine received from you Stinger air defense systems. Already during the first days of the war they helped us to resist Russian aggression. The missile system saved our people's lives," Zelensky said.

The Ukrainian leader noted that at a time when many other countries were looking for pretexts to not help Ukraine, Latvia was among those countries that took action. Latvia has helped Ukraine both militarily and with human relief, thus demonstrating its stance and attitude. Also, Latvia has taken in Ukrainian war refugees, Zelensky said, adding that Ukraine will always remember Latvia's assistance.

The Ukrainian president asked rhetorically why is it that the countries helping Ukraine the most are not among the richest ones, but have nevertheless shown their courage. Meanwhile, more affluent countries preferred to stand aside and not help. Such countries, Zelensky said, are being criticized for hypocrisy and double standards. It appears that they are supporting Russian aggression and are willing to maintain good relations with Russia at all costs, the only reason for this being money.

"They are looking for their own gain and are only able to think about revenue, interest and bank statements. There are also those who groundlessly hope that they will be able to appease Russia if they keep quiet and not fight against aggression. We are talking about a destruction of values. Some people think that not all nations matter. They also believe that some nations can be simply forgotten," Zelensky said.

"There are people who want to live in illusory peace the price of which will be the deaths of thousands of people, millions of deported and an even higher number of people whose motherland will have been taken away," the Ukrainian president said, stressing that peace for such a price is not normal.

The Ukrainian leader said that in a not so distant past disrespect for particular peoples could lead to pacts that deprived countries of their sovereignty and stocked appetite for war in which millions of people perished. The lives of several generations were poisoned, and it was believed that Europe and the West in general had learned something from this tragedy.

Now we are hearing again that Russia must be given what it wants. Ukraine must put up with losing part of its territory because the power side wants it. In all seriousness negotiations are being held to draw red lines at the cost of a sovereign country. It is also being said that the aggressor has to be appeased and concessions have to made at the cost of the country that was attacked. This is being demanded from a country that is resisting the Russian army, which is the strongest in the world, for the fourth month already," Zelensky said.

Zelensky asked rhetorically what will happen when countries with smaller defense potential than Ukraine are attacked. Will the world help these countries or just hand them over without even arguing. The Ukrainian president warned that these are not just reflections but harsh reality, because Russia is openly saying that it will not stop at Ukraine. It needs other countries as well - Latvia, Lithuania, Estonia, Poland and other European countries. That's why respect for fundamental values must be restored in the world, he said.

"We must firmly and on all levels defend the principle that each state and nation matters. No country's interests can be ignored. No country can be subjugated. Only if this principle will be respected there will be unity in Europe and Russia will stand no chances of winning the war against Ukraine or any other country," the Ukrainian president said.

It is also being said that Ukraine should not be given all the weapons it needs, as if the Ukrainian people was less valuable and important than other peoples. They also say that Ukraine should give up some of its land as a necessary compromise. Such talk also suggests that the Ukrainian people is not worthy enough to take its interests seriously.

"We are also being asked to wait a bit with accession to the European Union, which might take years or even decades. Some are not only unwilling to grant us full membership in the bloc but are also objecting to and questioning granting the status candidate state. If Russia attacks another country, God forbid, Latvia, then all NATO member states will have to decide - to protect Latvia or not," Zelensky said.

If Russia provokes a crisis at its borders or some other European country, EU member states will have to decide whether to help or not.

"In March, the Chapter of Orders in Riga Castle decided to award me the Order of Viesturs First Class for an unwavering defense of my state and land. It is a great honor to me, but I take it not as an award for myself or my work, but as an award for our common struggle - the Ukrainian people's struggle for independence and the Latvian people's fight for the freedom of Europe and all Europeans who respect our common values and aspire for Europe's unity and strength," Zelensky said.

The Ukrainian president said that unity in Europe is necessary, because it will help ensure security in Ukraine and other countries that might be threatened by Russian aggression.

Europe needs unity and strength to make Russia pay a full price for the war in Ukraine by imposing sanctions and confiscating assets.

"Russia must learn that war causes the greatest problems to the aggressor. It is necessary to adopt the sixth sanctions package envisaging embargo on Russian oil and its products. The sanctions must be sweeping and extensive, so that Russia paid for its terror against Ukraine," the Ukrainian leader said.

European support and potential is also needed to call Russia and its criminals committing genocide against the Ukrainian people to justice. Zelensky thanked Latvia and President Egils Levits for the initiatives that will help put Russian war criminals in the dock.

"Ladies and gentlemen, dear Latvian people, our parents hoped that our generation will not be affected by war, than we will not experience what they did - occupation, reprisals, deportations. We have everything in our hands to remove this threat. I am confident that we will accomplish this together, considering the values we support. Glory to Ukraine!" Zelensky said at the end of his speech.

As reported, Zelensky addressed the Saeima at the invitation of Speaker Inara Murniece (National Alliance).

Murniece along with the speakers of the Estonian and Lithuanian parliaments were the first parliament speakers to visit Kyiv after the outbreak of the war. On March 24 they met with Ukrainian parliamentarians and the president in the Ukrainian capital.