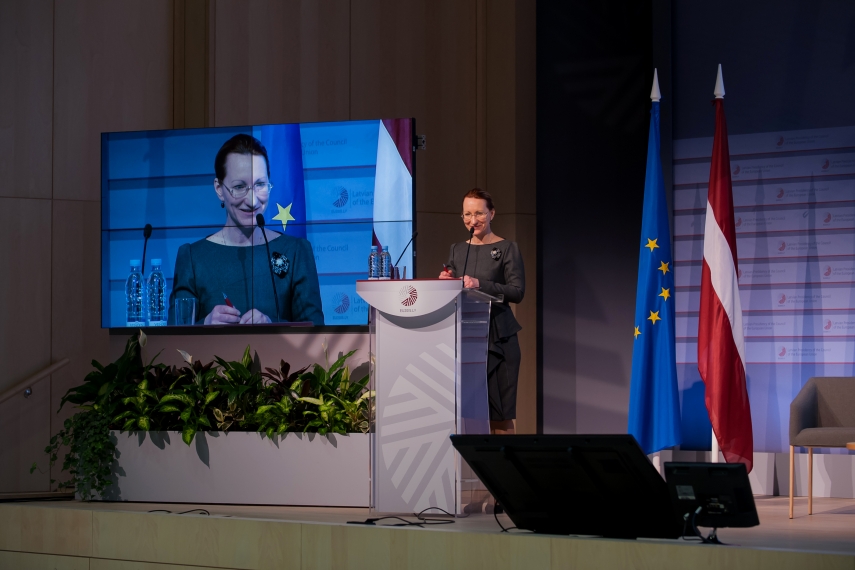 TO SUPPORT AND STRENGTHEN: this year’s Cultural Crossover confernece in RIga looked to create more EU support for creative industries.

RIGA - A series of  three international conferences  discussing areas of cultural and creative crossovers, the interaction of cultural heritage, modern architecture and design, and strengthening the European audiovisual media market took place during the “radi!2015” Creativity Week as part of the the Latvian Presidency of the Council of the European Union. The “radi!” Creativity Week was initiated by the Ministry of Culture of Latvia and the British Council.

Dace Melbarde, Latvia’s Minister for Culture, stressed the importance of the conference for the Latvian Presidency of the Council of the European Union: “We have set three main priorities for our Presidency in the area of culture. These are: the promotion of cultural and creative crossovers; the interaction of heritage, contemporary architecture and design; and the future regulatory framework for European audiovisual policy. These priorities are directly linked to each other. They are all aimed at encouraging action to support and strengthen Europe’s cultural and creative industries.”

Though Dace Melbarde, and the European Commissioner for Education, Culture, Youth and Sport, Mr Tibor Navracsics, as well as the Head of the State Inspection for Heritage Protection of Latvia Mr Juris Dambis, all expressed their confidence that the member states have all the preconditions required to promote creative crossovers and interaction between different sectors, it was the absence of the business community — in particular from the cultural and creative crossovers conference, held at the Latvian National Library, and which saw 317 delegates representing 32 nationalities taking part — which was a matter of concern raised by a conference participant during the concluding panel discussion; a question concerning the absence of the business community was directed to Mr. Andris Ozols, General Director of the Investment and Development Agency of Latvia.

Given that one of the Latvian Presidency’s priorities in the field of culture is cultural and creative crossover, why was the business community largely absent from a conference that was endeavouring to send a message about the benefits of partnering culture with other sectors to maximise creativity, growth and innovation?

Zanda Tamulone, from the Creative Industries Division of the Ministry of Culture of the Republic of Latvia, a division which was established in 2012, said,  ‘’of course we would have been happier to have had more entrepreneurs represented, but invitations to the conference were sent out to the widest possible audience, including different business communities and entrepreneurs. But the final decision of whether they wished to  attend the  cultural and creative crossovers conference  was entirely up to them.’’

The European Commissioner for Education, Culture, Youth and Sport, Tibor Navracsics, was keen at the conference to stress Europe’s position as one of the most innovate and creative continents in the world .
‘’Europe has long traditions of innovation and creativity, social progress and economic dominant position and we would like to preserve this position,” said Navacsics. “That is why we have to improve our competitiveness. We have to use our spare forces of culture and creativity.”

The Commissioner, who had the opportunity to visit the “Lieta Nr. 1914/2014” exhibition at the Corner House (Stura maja) or the former KGB headquarters in Riga, a building which became a prominent symbol of totalitarian terror and power, further emphasised that the three international conferences organised by the Latvian Ministry of Culture corresponded with the very essence of European identity.

The first of the three  international conferences entitled “Strengthening the European Audiovisual Media Market for the Development of the European Identity” endeavoured to create a European-level discussion on how to respond to the media challenges of the 21st century.

The main conclusion reached at the second conference “Cultural and creative industries transfer process’’ by some of Europe’s leading experts was that creativity and cross-sectoral partnerships are a prerequisite for the future development of society, especially in the digital age.
Director-General of the European Commission Directorate-General for Education and Culture, Mr Xavier Prats Monne, stressed the great potential of the cultural and creative industries sector, which is the third-largest in terms of employment after the construction and food industries.

The importance of the creative industries to national economies was also stressed by a number of the conference delegates, Johanna Bolhoven, Senior Strategy Executive at Creative England, stressed the importance of the creative industries, which made a £71.4 billion (101.5 billion euro) contribution towards the national economy of the United Kingdom and furthermore has provided 1.68 million jobs – 5.6 per cent of the total UK labour market.

In Austria, the creative industry makes up 10.4% of the total economy  stated Doris Frohlich, the Austrian Programme Director of the Impulse Programme. This situation according to Frohlich can be seen in similar statistics throughout the European labour market, which, according to Frohlich, is a clear indication that  creativity is indeed a driving force for economic and social development.

So where was the business community at this conference?
“After five years of “radi!” Creativity Weeks in Latvia, it is clear that we have a host of positive and practical examples, but further work needs to be done because many obstacles can still be found in traditional management systems,’’ said Dace Melbarde Culture Minister of Latvia.

Marco Steinberg, founder of the Finnish think tank, Snowcone & Haystack, and one of the cultural crossover conference’s keynote speakers, said that management systems created in the 18th and 19th centuries are no longer applicable for the dynamic changes of the 21st century. Steinberg believes we have to think creatively about revising our day-to-day management models. Dace Melbarde, the Minister for Culture of Latvia, added that, “while we may manage to write good cross-sectoral policy documents, we are not always as successful when it comes to implementing them, as all the implementation mechanisms are developed within the different sectors. We therefore need to look for new synergies between different sectors.”

A decisive role in the implementation of creative industries policy is played by successful inter-institutional cooperation. Other state institutions and non-governmental organizations are also involved in the policy planning and implementation.
One of the  recent projects the Creative Industries Division  has been involved with is the creative partnerships program RaPaPro, which was initiated and financially supported by the Ministry of Culture of Latvia with the aim of forming new partnerships in secondary vocational level cultural education schools, involving art, design and music teachers and students, municipalities, entrepreneurs, social groups and other representatives from local communities.

Thirteen RaPaPro projects, according to Zanda Tamulone, have resulted in the acquisition of new skills and knowledge and provided the chance to work in interdisciplinary teams and promoting the usage of design thinking in cultural education.
The international conference “Heritage, Contemporary Architecture and Design in Interaction” concluded the “radi!2015” Creativity Week, saw more than 160 heritage experts, architects, designers, planners, representatives of local and national governments and owners of cultural heritage objects from almost all the EU member states taking part.

The main keynote speakers included internationally acclaimed experts, such as the German architect Meinhard von Gerkan, who was born in Riga, and who still harbours  a strong emotional attachment to Latvia; the director of the Museum for Europe and the Mediterranean and coordinator of Marseille’s European Capital of Culture 2013 project, Mr Jean-Francois Chougnet; and architect Ms Marianne Saetre from Norway, representing the Snohetta architects’ bureau that designed the Oslo Opera House, as well as the award-winning  Bibliotheca Alexandrina in the Egyptian city of Alexandria.

The delegates of the International conference “Heritage, Contemporary Architecture and Design in Interaction” where taken at the conclusion of the conference for a tour  of Rundale Palace. Meinhard von Gerkan, founder of the architecture firm Gerkan, Marg and Partners, which currently has 500 employees in 10 offices worldwide, told the The Baltic Times about his past involvement with the project for a new concert hall in Riga.

It would be wonderful for Meinhard von Gerkan, who has designed and built concert halls, as well as for many concert goers in Riga, to see a new concert hall built in Riga. Plans are progressing for a new contemporary art gallery in Riga,  with a letter of intent signed between ABVL Bank and the Ministry of Culture of Latvia, but plans for a new concert hall for Riga have remained stagnant, with no strong leadership emerging or direction being provided to take the project by the helm and drive it forward. The music journalist Orests Silabriedis has pointed out that this is despite the fact that an impressive new concert hall has been built in Rezekne, as well as Cesis, and one is due to open in Liepaja.

Cultural leaders and the business community in Riga must wake up to the fact that that Europe is paying attention to Latvia’s cultural heritage, its cultural development, and its cultural infrastructure, and that they must provide leadership. The Baltic Times intends to devote a series of articles to the need for a new state-of-the art concert hall in Riga.
During the Heritage, Contemporary Architecture and Design in Interaction conference, Meinhard von Gerkan also spoke about the number of projects his firm has designed in Latvia, including the Citadele office and business complex,  as well as the opulent  Villa Marta and Villa Alexandra  for  former Parex Bank CEO  Viktors Krasovickis.

It was noted that Krasovickis’  garage housed 6 luxury cars which were apparently never driven. The total direct and indirect cost to the Latvian government of  Parex’s activities  have been estimated at more than a billion dollars. This was a factor in the 2008–2010 Latvian financial crisis, which forced the Latvian state to borrow money from the International Monetary Fund and the European Commission to cover a balance of payments deficit.

More information on the creative industries platform supported by the Creative Industries Division of the Ministry of Culture of the Republic of Latvia, can be found at the website: http://www.fold.lv/en/