Estonian formin: NATO's promise to make Georgia member must not remain as rhetoric 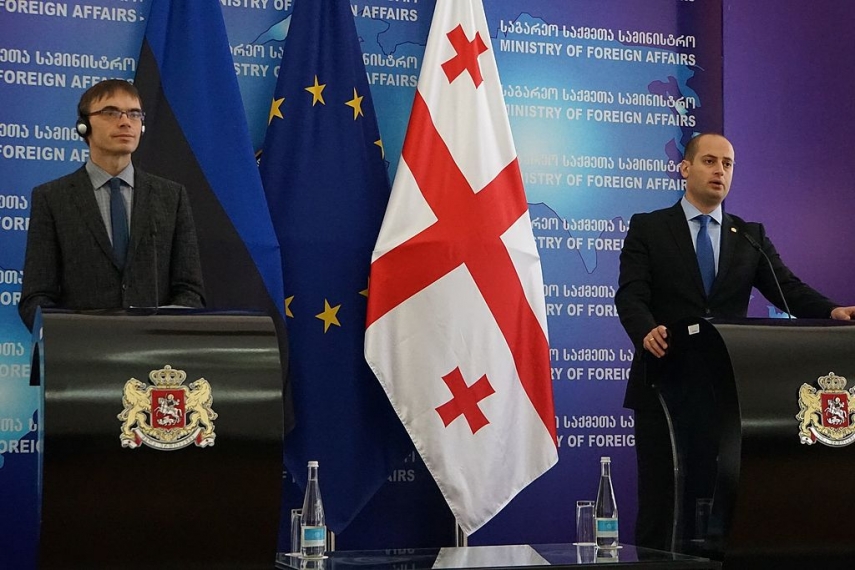 BRUSSELS - NATO's promise given nine years ago to one day accept Georgia as a member of the alliance must not remain as rhetoric, Estonian Foreign Minister Sven Mikser on Wednesday told BNS at the NATO headquarters in Brussels.

"Next year, it will be 10 years since NATO's Bucharest summit, where it was said in a statement concerning NATO's open doors policy that Georgia will one day become a member of NATO," Mikser said in a short interview to BNS after a two-day meeting of NATO foreign ministers.

He said that this promise must not remain as rhetoric.

"I would definitely not say so," the minister said in response to a question posed by BNS whether it could be said that Georgia will not get into NATO before Russia abandons its aggressive power policy.

"We know that Russia has not been happy or content with any of NATO's enlargement rounds taking place after the Cold War. At the same time, NATO enlargement is a matter between NATO and the candidate countries and no third country has or will have veto rights," the minister said.

He said that Georgia has made remarkable success steps and demonstrated readiness to notably contribute to Euro-Atlantic security. "Georgia with approximately 900 troops is one of the largest contributors even in absolute numbers at the NATO mission Resolute Support in Afghanistan. This is a significantly remarkable contribution and participation," Mikser said.

The minister said that Georgia has in many ways also very specifically contributed to the security of the Black Sea region, which is an important strategic direction for NATO.

"A higher-level meeting of the NATO-Georgia Commission will also hopefully take place at the NATO summit next year. At any rate, Estonia supports it," the minister said.

Mikser said that the foreign ministers of NATO at a discussion held on Wednesday spoke about the alliance's open doors policy, Georgia, Ukraine and the Western Balkan countries. "Both Georgia and Ukraine as well as the Western Balkan countries are important for NATO. The stability and security of the countries themselves is important regionally, the alliance's open doors policy is of importance from the perspective of NATO's credibility," he said.

Similarly to Georgia, Estonia also recognizes Ukraine's right to choose the level of their aspirations and ambitions in their relations with NATO, Mikser said. "The same idea was expressed in Bucharest also in the direction of Ukraine. Estonia has always supported and will continue to support the principle that the geostrategic course of countries is for them to choose," he said.

The minister said that after that, everything depends on the capabilities of the countries to carry out reforms. "Of course, members of NATO must also be convinced of the sincerity of their reform aspirations," Mikser said.