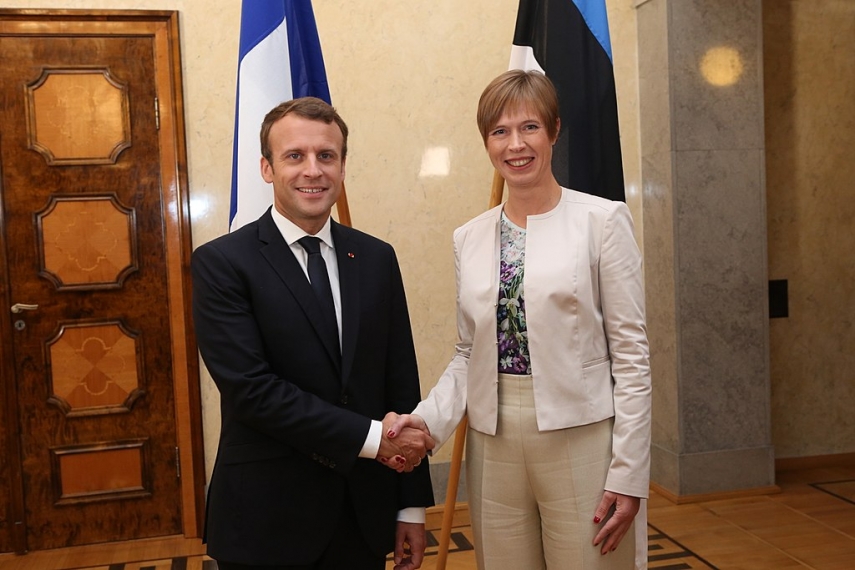 TALLINN - At their meeting in Paris on Monday, Estonian President Kersti Kaljulaid and French President Emmanuel Macron talked about security and democratic values.

"France and Estonia are good partners to each other in the European Union and strong allies in NATO. Today we are standing up together for democratic values and freedoms," the Estonian head of state said after the meeting at the Elysee Palace.

The president of Estonia thanked the French head of state for the support he has extended to Estonia, spokespeople for the Estonian president said. "Estonia and France stand solidly with each other and share the common understanding and commitment to develop the future of the European Union," Kaljulaid said after the meeting.

In addition, the two heads of state talked about security cooperation. "As an ally, France was present in the NATO battle group in Tapa last year and we welcome them back next year," Kaljulaid said.

Other topics discussed by the presidents included future of Europe, the next EU budgetary framework and developments related to European defense, the presss service of the Estonian president said.

"The influence of France and Paris in Estonia is deep and humane, it is a footprint in our national cultural memory which helped us survive the difficult years of occupation," Kaljulaid said in her remarks ahead of the opening ceremony.

On Tuesday, Kaljulaid will open an economic forum in Lyon in which businesses from both France and Estonia will take part. The head of state will then visit the Digital City in Lyon and open a cyber competition of the Estonian company Rangeforce. Meetings have been scheduled also with Stephane Bouillon, prefect of the Auvergne-Rhone-Alpes region, and Mayor of Lyon Georges Kepenekian, as well as a lunch with local politicians and businesspeople.