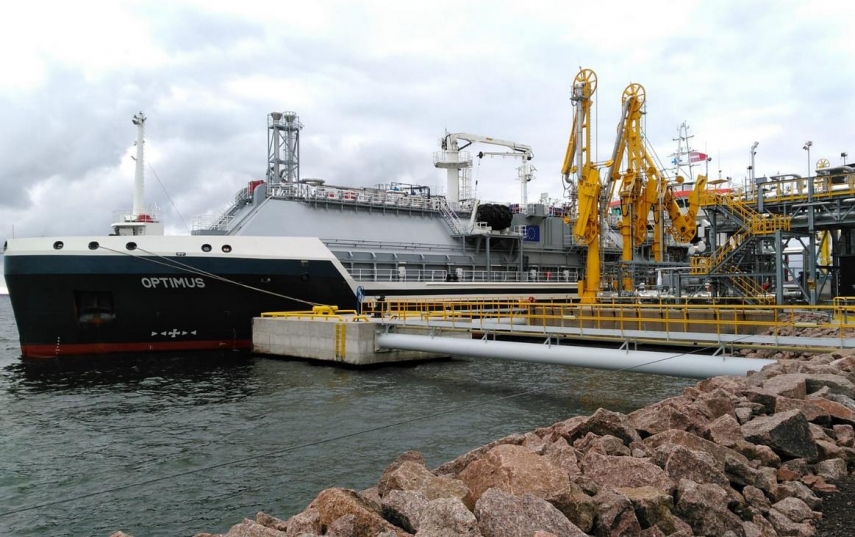 An LNG terminal has started operating in HaminaKotka, the largest port of Finland, in which the Estonian energy company Alexela has made the largest direct investment in history from Estonia to Finland. It is also the first LNG terminal in Finland that is connected to the national gas network. The first commercial LNG carrier received this weekend marks the start of business for the terminal.

On Saturday, 22 October, an LNG cargo ordered by the Estonian energy company Alexela from the Zeebrugge LNG terminal in Belgium arrived at the port of HaminaKotka in southern Finland. The received LNG is delivered to the high-pressure Finnish transmission network where it reaches Estonian customers, too, via the Balticconnector, plus it is delivered by trucks to both Finnish and Estonian customers.

“The largest direct investment in the history of Estonia in Finland called “Hamina LNG terminal” has now officially started with the arrival of the first commercial LNG vessel,” said Marti Hääl, Chairman of the Management Board of Alexela AS and Member of the Management Board of Hamina LNG Oy. He acknowledges that there are no words to express how important the project that started in 2015 is as a milestone in the professional life of the Estonian energy company. Partners have been found on the long journey and a terminal has been completed, which will now serve Estonians as well as Finns and contribute to the energy security and supply security of both Estonia and Finland.

“Let's just say that the first commercial LNG we unloaded in Hamina over the weekend is not just a coloured dot on the map, but it marks the creation of a new supply chain independent of Russian gas in our region,” Hääl said. “And for industries located far from the gas network in both Finland and Estonia, the Hamina terminal is the most favourable place for LNG deliveries,” he added.

Alexela and Haminan Energia started cooperation in 2015 by founding a joint venture called Hamina LNG Oy. After carrying out all the required procedures, the design and preparation of construction began in 2017. In the spring of 2018, the final investment and financing decisions were reached, and under the leadership of Alexela's engineering team, construction work on the terminal began at the site. 2019-2022 – despite various crises and unexpected events, the construction was successfully completed. Testing of Hamina’s terminal systems began this September. In the middle of the month, the first LNG carrier arrived with the LNG needed to cool down and start up the terminal's processes. In the last days of September, gas was delivered to the local low-pressure distribution network of the Hamina-Kotka region, and the loading systems for LNG trucks were started. At the beginning of October, gas began to be delivered to the Finnish high-pressure transmission network which is connected to Estonia via the Balticconnector. The Hamina LNG terminal is open to all market participants. The total investment of the terminal exceeds EUR 100 million.

Alexela is an Estonian company primarily operating in the energy sector. Alexela’s service portfolio in Estonia includes electricity, natural gas, cylinder gas, tank gas, motor fuels and more that 100 filling stations in Estonia. In addition, Alexela has got 39 convenience stores all over Estonia. Besides Hamina Finland, Alexela is developing LNG station also in Paldiski, Estonia. Alexela also produces renewable fuel biomethane (green gas). Alexela is also developing a pumped-hydro storage plant in Paldiski, which provides an opportunity to store the generated solar and wind energy for those hours and days when there is not enough green energy available.