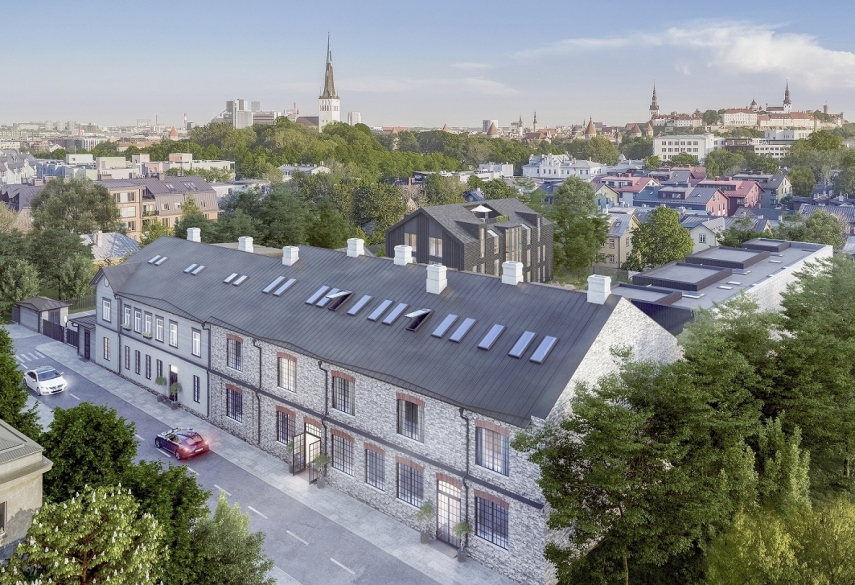 The Klausson Candy Factory is a new development project for Endover, as part of which the 100-year-old factory is being turned into a contemporary living environment with spacious loft-type apartments in Scandinavian style. In terms of the property market the project is in the most sought-after location in the city – at 5 Jahu Street, on the side of Kalamaja facing the city centre, close to the sea and the Creative Hub.

Due for completion in 2020, the development will involve the reconstruction of the historical factory complex, which will feature a total of 50 one- to five-room apartments ranging in size from 20-150 m2. The prices of the loft apartments, all of which will have a modern finish, start from 110,000 euros. To date, before construction has even begun, 20% of the apartments have already been sold.

The volume of capital likely to be needed to see the factory’s crowdfunding project through is up to 6.4 million euros. Investors will have their loans repaid within 18 months regardless of whether the apartments have been sold by that point. The annual interest rate on the investments is 11.0%. The borrower will add a 1% bonus to the annual interest rate, making a total of 12.0% per annum, on investments starting from 20,000 euros.

Endover CEO Robert Laud says that Endover has pioneered the use of crowdfunding on the Estonian property market to raise investments. The company has so far found investors for 16 real estate development projects in this manner. Of those projects, 13 have been completed and their investments reimbursed in full.

“We consider different financing options for every development project,” Laud explained. “For the Klausson Candy factory we opted for a crowdfunding approach, working with EstateGuru. Crowdfunding’s a modern way of financing a project that’s both quick and flexible. It’s already quite widespread on our property market. As the biggest developer here in Estonia we do everything we can to ensure that our investors trust us and have a sense of security. In fact, on quite a few of our projects we’ve managed to pay back their investments ahead of time.”

EstateGuru Business Development Manager Daniil Aal says that crowdfunding is very much a growing trend among major developers. “It’s no longer the case that crowdfunding is just for minor players developing niche products,” he said. “Everyone’s using it, even the most experienced players. And they’re not only using it to develop residential real estate – for example, T1 Mall of Tallinn opened recently, having raised extra investments through an international crowdfunding platform.”

Aal says that one of the advantages of the EstateGuru platform from the point of view of developers is that it is not only flexible, but comes with a ready-made additional marketing channel in the form of the company’s network of investors. “Just like all of our projects, information about the Klausson Candy Factory went out to all 23,000 of our investors,” Aal said, adding that the crowdfunding platform has attracted a large number of investors thanks to its notable results. “In the five years we’ve been operating our investors have earned an average of 12% interest each year, which is more than 7 million euros in total to date,” he explained. Currently operating in the Baltic States, Finland and Spain, EstateGuru aims to become the market leader in its field throughout Europe.

Founded in 1995, Endover is a group of companies specialising in real estate investment management and property development and is the biggest developer of residential real estate in Estonia. The company is currently developing 32 buildings in Tallinn and has years of experience in reconstruction and new developments. Its latest projects include the recently completed Volta Lofts in the part of Kalamaja closest to the sea, the Torn highrise being erected in Kristiine, the historical Klausson Candy Factory at 5 Jahu Street on the border of Kalamaja and the city centre and the luxurious Ambassador residence being constructed on Gonsiori Street in the heart of the city. According to an independent survey conducted by Kantar Emor in 2018, Endover is Estonia’s best-known real estate developer.