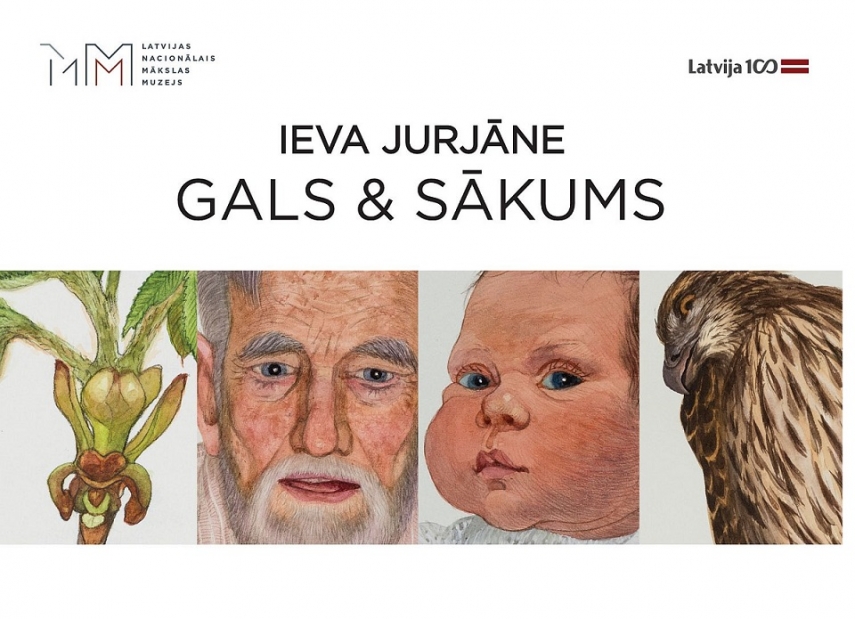 RIGA – A solo exhibition END & BEGINNING by Ieva Jurjāne will be on view in the 4th Floor Exhibition Halls and Cupola Hall on the 5th floor of the main building of the Latvian National Museum of Art in Riga (Jaņa Rozentāla laukums 1) from 10 November 2018 to 3 February 2019. The exhibition is included in Latvia’s centenary programme and is a sub-project of the exhibition PORTRAIT IN LATVIA. 20th CENTURY. Facial Expressions.

While the cult of eternal youth creates an illusion of time standing stil, the awareness of every thinking person is periodically shaken when reminded of the relentless marching of time. People as individuals and personalities are fixed to their own particular span of time. The continual cyclic renewal of nature accompanies a person’s life like a parallel existence, which one can see in the birth of a bud or the death of a bird. This exhibition is a considered meeting place for that which is departing and that which is arriving.

The people of Latvia’s first centenary – those who are witnesses to the last 90 to 100 years – exist amongst us, but are practically invisible. However, it often turns out that these centenarians are real personalities, whose vitality and energy seem to supercede the boundaries defined by matter. It is possible that the nature and lives of these people have some secret that could be discovered by spending time with them. Individuality and uniqueness interest Ieva Jurjāne as undying, universal and enduring values.

Life-size portraits of elderly people have been painted from life as large-format watercolour paintings. The work process involved intense interaction which encouraged an air of mutual trust. Excerpts of audio interviews recorded during the sittings can be heard in the exhibition, wherein the subjects of the portraits share important episodes in their personal lives. These people have been inevitably shaped by the significant and complicated events of this historical period.

In obvious contrast, life-size portraits of babies, only a few months old, are displayed in parallel. The tiny contours of their bodies attest to the fragility of life, simultaneously the intensity of expression of each individual demonstrates the presence of a personality in the making, which in the future will fill the space of their name and time with content.

Nature often helps a person make attempts at comprehension. The thinker notices the potential hidden in a bud and the eternity arrested in a fallen bird. A painter paints an idea.

The title of the exhibition is a direct reference to the anthology by Rainis The End and the Beginning. Reflecting on the introduction Coming to One’s Senses he comments: “A person comes to one’s senses; he becomes aware of the necessity to search for the meaning of his own existence.” END & BEGINNING is located in continual collaboration with interrupted infinity.