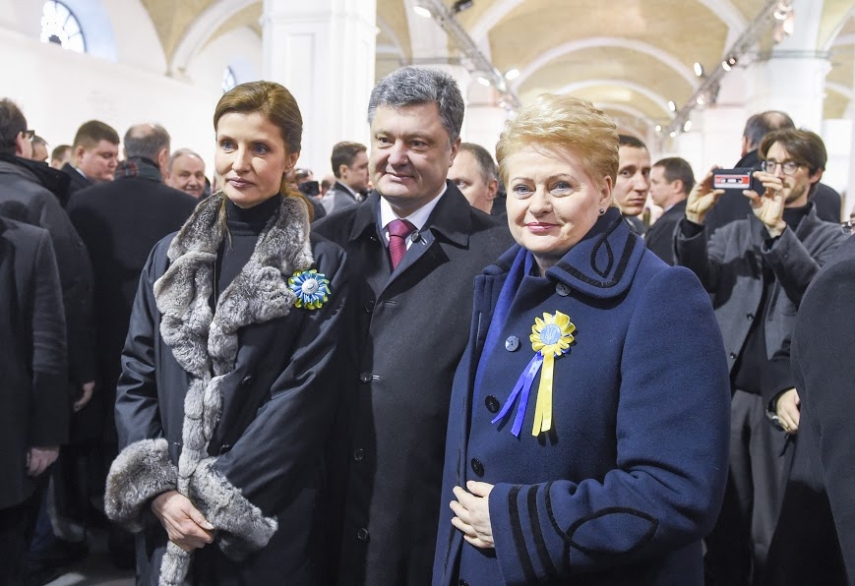 Vytautas Landsbergis, head of the Lithuanian state between 1990 and 1992 — and a man who is rumoured to have great influence on the current Lithuanian President Dalia Grybauskaite — was absolutely right the other day. He was describing the Minsk-2 agreements of Feb. 11, and he dismissed the agreement as “worse than Munich”, referring to the 1938 Munich Agreement, which was imposed on Czechoslovakia by Germany, the UK, France, and Italy, and which allowed for Germany’s annexation of Czechoslovakia’s Sudetenland region.

Indeed, the Minsk-2 agreement — which, among other things, was aimed at bringing fighting in the eastern region of Ukraine to a halt, and which was pushed by Russian, French and German leaders while Barack Obama dithered over whether to send arms to Ukraine — gives some legitimacy to the Kremlin’s agents: the leaders of the so-called people’s republics of Donetsk and Luhansk in eastern Ukraine. This is because these leaders, unlike the Berlin-backed puppet leaders of the Sudetenland in 1938, were invited to sign the deal.

Unlike the Minsk-1 ceasefire agreement, the Minsk-2 deal was blessed by the presence of four state leaders. But the Minsk-2 deal, as Lithuanian President Grybauskaite correctly emphasised, is vague regarding the main issue: Ukrainian control over the internationally recognized border between the state of Ukraine and the state of Russia. It seems that Crimea might not even have been mentioned during the talks in Minsk. Russia was not named as the aggressor or a participant in the war.

As it did in 1938, democratic Western Europe has decided to put more pressure on the victim than on the non-democratic regime, which has demonstrated aggressive intentions (some Ukrainians refer to German Chancellor Angela Merkel as “Frau Ribbentrop” for cozying up to Putin). It would be wrong, however, to criticise Ukrainian President Petro Poroshenko for agreeing with the deal in Minsk. He had no other option because the Ukrainian economy is on the verge of bankruptcy.

The Minsk deal was imposed on him by Western leaders: immediately after (not before) Poroshenko agreed to the Minsk-2 deal, IMF Managing Director Christine Lagarde announced, on Feb. 12, that the IMF team working in Kiev had reached a staff-level agreement with the Ukrainian government on a new economic reform programme that would be supported by $17.5 billion (15.5 billion euros) from the IMF.

There is some hope in the West that the session of psychotherapy by Merkel in Minsk (according to Russian political analyst Stanislav Belkovsky, Putin is interested only in opinions of Obama and Merkel, regarding Francois Hollande as a clown) will have positive effect on Putin’s mindset, but it is probably impossible to find an expert in Lithuania today who would state with confidence that Minsk-2 will survive for a long time.

In fact, the Minsk-2 agreement has already been broken by the Russian assault on the Ukrainian town of Debaltseve. “Yesterday’s miners and tractor drivers” – as Russian President Vladimir Putin recently described the ‘pro-Russian separatists’ who quite blatantly include regular Russian army soldiers, as well as mercenaries from the local area and all corners of Russia, finally took the town well after the officially announced ceasefire of Feb. 15 had been signed and sealed. The storming of Debaltseve after the official ceasefire claimed the lives of many Ukrainian soldiers and at least 110 of the Ukrainian army’s soldiers were captured as prisoners of war.

In the very beginning of August 2014, I wrote an op-ed for The Baltic Times titled “America, send weapons to Ukraine!” It was published in TBT of Aug. 6, 2014 and the op-ed’s essence was reflected in its title. At that time, Ukrainian officials, Lithuanian officials and U.S. Senator John McCain were rather too shy to speak about the need for such supplies of weapons.

However, very soon the situation became different: now the officials in Kiev are begging for American weapons and there is widespread bipartisan support for the idea in the U.S. Congress (only the Obama administration itself still seems uncertain about the issue). However, Lithuania, undeterred by the angry statements of the Russian Foreign Ministry, is still the only NATO country which has sent weapons to Ukraine.

In February, Lithuanian Foreign Minister Linas Linkevicius and Lithuanian Defense Minister Juozas Olekas told the foreign and Lithuanian media about such supplies from Lithuania. They did not specify which sorts of weapons have been sent by Lithuania (it would be great if the weapons turn out to be the FGM-148 Javelins, the U.S.-made man-portable anti-tank missiles).

There is popular approval in Lithuania for the sending of weapons to Ukraine. It is supported by President Grybauskaite, the Social Democrat-led ruling coalition as well as the two main oppositional political parties, the Liberal Movement and the Homeland Union – Lithuanian Christian Democrats. It reflects the opinion of the nation: on Feb. 20, a presenter of the Lithuania’s TV3 evening news asked its viewers to answer the question “Must the EU and the U.S. supply weapons to Ukraine?” on its Internet site zinios.lt and the results were as follows: 61 percent chose the answer “Yes, Vladimir Putin understands only the language of weapons,” 28 percent chose the answer “No, it is better not to annoy Russia,” and 11 percent chose the answer “The conflict can be still solved by negotiations.”

A large part of the EU countries’ electorates, especially the electorates of the Kremlin-friendly radical right and the radical left (the kind of folks who are fans of the coalition led by Greek Prime Minister Alexis Tsipras, although the mainstream electorate, to a big extent, as well), is hypnotised by the Kremlin’s propaganda regarding its ‘fighting for peace.’

That’s nothing new in the Kremlin’s propaganda. Joseph Stalin, speaking about the reasons for World War II, said the following in his interview, which was published in the main Soviet newspaper Pravda on Dec. 1, 1939: “Germany did not attack France and England. France and England attacked Germany and they are responsible for the current war. After the start of war, Germany addressed France and England with peace proposals and the Soviet Union openly supported the peaceful proposals, which were made by Germany. The ruling circles of England and France roughly rejected the Germany’s peaceful proposals and attempts of the Soviet Union to finish the war as soon as possible.” At that time, the pro-Kremlin French Communist Party actively supported the Berlin’s ‘peaceful initiatives’ and criticised the ‘war-thirsty’ French government.

The current Western economic sanctions against Russia are purely symbolic. According to estimations by Mikhail Khodorkovsky, who spoke at the forum of Russian intellectuals in Vilnius in January (one of the last conferences attended by Boris Nemtsov), these sanctions have caused little harm: a reduction of just 2 percent in Russia’s annual state budget. Russia’s current economic problems are related to the price of oil, not sanctions. The real sanction would be blocking Russian access to the SWIFT banking transaction system - something that has been suggested by British Prime Minister David Cameron.

Unfortunately, there is no appetite for real sanctions in the EU. On 6 March, I presented my book The Unknown War (La Guerra Sconosciuta in its Italian-language version) on the armed anti-Soviet resistance in Lithuania in 1944-1953 (a highly important experience of the Lithuanian nation due to current geopolitical issues) at the Italian parliament – in fact, some Italian politicians, who were present at the event, expressed their unwillingness to continue even the EU’s current symbolic sanctions against Russia because they regard Ukraine, despite the international law, as a less homogeneous country than Lithuania. (As an aside, it is worth noting that the Italian attitude to the Baltics is very supportive – on 18 March, the Italian armed forces’ Typhoon jets, which are stationed near the Lithuanian town of Siauliai, were alerted to escort a group of 11 Russian military aircrafts flying with their transponders switched off in international airspace near Lithuania).

Over the last several months, Lithuania has kept urging the EU to impose tougher sanctions against Russia. No wonder that Grybauskaite was named Ukraine’s biggest promoter in the list of “Top 10 Promoters of Ukraine in the World,” which was released by the Kiev-based Institute of World Policy at the end of January. This was based on surveys conducted among Ukrainian and foreign experts in 2014 (second on the list is Swedish ex-Foreign Minister Carl Bildt, who is followed by U.S. Republican Senator McCain, American historian Timothy Snyder, Ukrainian President Poroshenko, German Chancellor Merkel, philanthropist George Soros, U.S. Vice President Joseph Biden, U.S. Democrat Senator Robert Menendez, and Canadian Prime Minister Stephen Harper).

No European country could resist a Russian attack entirely alone. During the USSR’s invasion of Finland in 1939, which resulted from the Molotov-Ribbentrop Pact, foreign aid from Western Europe and the U.S. made up 85 percent of the needs of the Finnish army. Finland was given a number of the weapons free of charge and many of its purchases were financed with donations from countries all over the world. Finland, although it lost some of its eastern territories, preserved its independence only due to such aid. “The often-repeated claim of Finland being left alone against the mighty Soviet Union is only a myth,” Finnish historian Pirkko Kanervo said in a conference on the Molotov-Ribbentrop Pact in Rome in 2012.

Arming the Ukrainians is long overdue. That way, they can start defending themselves, although the only really sustainable solution which could guarantee peace in the region in the longer term is some significant deployment of U.S. troops in Ukraine and all the NATO countries in Russia’s neighborhood. Obama stated several times in public that he has no intention of sending U.S. troops to Ukraine. It was shortsighted to make these statements in public because such words only encouraged the Kremlin’s aggressive actions. It remains for Ukraine to struggle and wait for more common sense appearing in the West as well as for a palace coup in the Kremlin and, maybe, wait for the next president in the White House, although, who knows, perhaps President Obama is intelligent enough to change his mind and start acting more decisively.