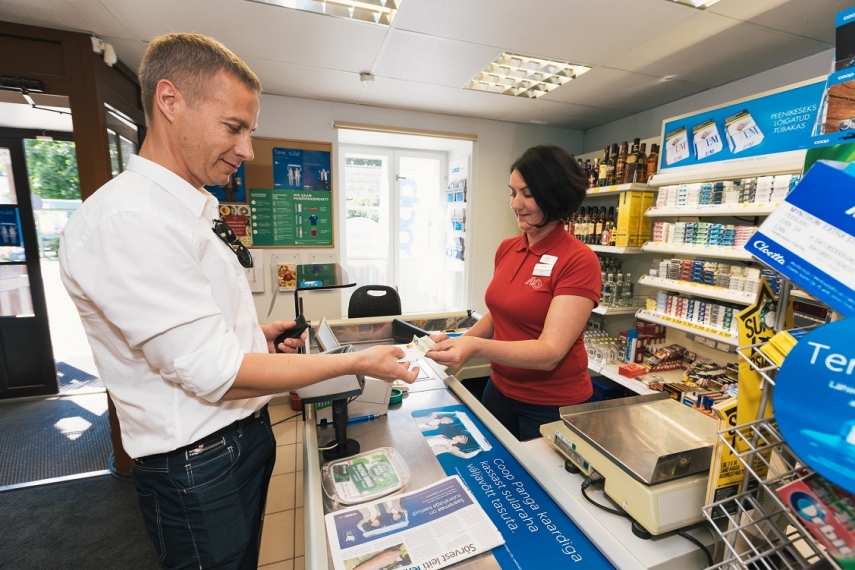 On Tuesday, 21 May, Coop Pank opens the cash depositing service in nearly 140 Coop stores. By mid-summer the bank’s private and business clients will be able to deposit cash on their accounts in more than 300 Coop stores, which means that the number of cash depositing points in Estonia will more than double.

Margus Rink, the chairman of the board of Coop Pank, said that because the majority of branch offices of Estonian banks have become cash-free in recent years and there are few ATMs which allow cash to be deposited outside major cities, bank customers often have to cover dozens of kilometres these days to deposit money to their accounts. “We are going to solve this problem by more than doubling the number of cash depositing points all over Estonia,” Rink noted.

He also mentioned that statistics show cash still being very widely used in Estonia; for instance, nearly half of the payments for purchases in Coop stores are made in cash. “The cash withdrawal service in Coop stores is used nearly 30,000 times per month, which equals approximately 1000 times a day. By offering the cash depositing service, we are making the next step,” Rink added.

On 21 may, Coop Pank opens the cash depositing service in 138 stores. More stores will be gradually connected to the system, and by mid-summer at the latest the service will be functioning in more than 300 stores all over Estonia.  The detailed list of the stores where cash depositing is available can be viewed at cooppank.ee/sula.

In a survey conducted in collaboration with the Estonian Association of SMEs (EVEA), 70% of the respondents stated that the lack of cash depositing options was a problem for them. “Nearly 80% of entrepreneurs have reported needing an opportunity to deposit cash in the recent year, and approximately half of them need the service at least once a month.  Half of the respondents among small-scale and medium-sized companies would also like to find cash depositing available nearer than they do today. I hope Coop stores will become a good solution for them,” said Heiki Rits, president of the EVEA.

Cash can be deposited at the cash register in the stores with the same ease as through an ATM. The client will only need to give the cash to the cashier, insert the card in the payment terminal and confirm the amount by entering the PIN. The cashier will then issue the receipt which confirms the deposit to the client.

The service is free for the clients who have opted for a Coop Pank’s banking plan. The service fee for the rest of Coop Pank’s clients is 2 euros + 0.5% of the amount being deposited. Other banks’ clients who would like to start using the service will have to open an account in Coop Pank and order a bank card.

According to the statistics provided by the Bank of Estonia, there were on average 87,000 cash withdrawals and 14,000 cash deposits per day in March this year in Estonia.  Every month, nearly 30,000 cash withdrawal transactions are made at cash registers in Coop stores.  Payments for nearly half of the purchases in Coop stores are made in cash, and the share of cash transactions is larger in small townships.  Banks in Estonia have 43 branch offices where cash transactions are available and 213 cash deposit ATMs; over 300 Coop stores to be added to the above will more than double the number of cash depositing options. The number of cash depositing points will primarily increase outside major cities.

Coop Pank, based on Estonian capital, is one of the five universal banks operating in Estonia. Coop Pank aims to put the synergy generated by the interaction of retail business and banking to good use and to bring everyday banking services closer to people’s homes. The main shareholder of the bank is the domestic retail chain Coop Eesti comprising 330 stores. Consolidating 19 associations, Coop Eesti has 80,000 cooperative shareholders and nearly 600,000 loyal customers.