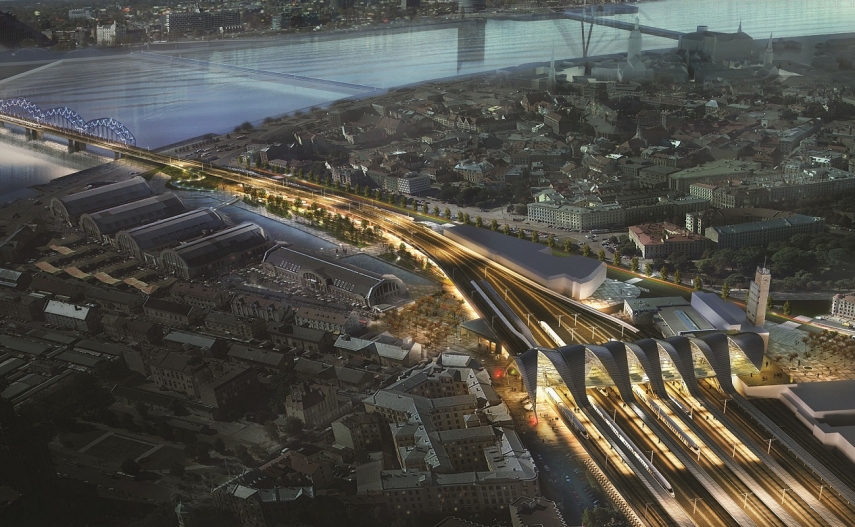 Contract on Design and Construction of the complex development of Rail Baltica Riga Railway Bridge, Railway Embankment and Riga Central Passenger Station is signed with “BESIX RERE GROUP” on 29 May.

International tender has successfully closed, and the winner to carry out design and construction works of the most important Rail Baltica object in Latvia has been chosen. On 29 May this year, “Eiropas Dzelzceļa līnijas”, implementer of the Rail Baltica project in Latvia, signed the contract with the winner of the tender – joint venture “BESIX RERE GROUP” (N.V. BESIX S.A. (Belgium) and LLC (SIA) “RERE BŪVE” (Latvia)). Implementation of Rail Baltica project will result in modern, multi-modal traffic hub in the centre of Riga improving mobility, safety and availability, as well as connecting two parts of the city. The new bridge will also allow pedestrians and cyclists to cross the river.

Contract (of the total volume of 10,000 pages including annexes) for design and construction works of Rail Baltica Riga railway bridge, railway embankment and Riga Central passenger station has been prepared and implementation of extensive works can commence . This is a complex contract, which unifies requirements for the design and construction of the object and, by the signing of which, the winner of the tender undertakes to perform complete development and coordination of the construction design, as well as construction works assuming full responsibility for the implementation of the project. The contract provides for organisation of works in four stages: design starts after conclusion of the contract, which is to be completed in the first half of 2021, and construction works in the Southern part of Riga Central Passenger station must be commenced in the second half of the aforementioned year, followed by commencement of works in the Northern part at a later date. Organisation of works in stages will help to avoid interruptions in city or railway traffic.

“BESIX RERE GROUP” is obliged to perform design and construction works on the basis of the solution selected in the sketch design competition developed by the architect office “PLH Arkitekter” in cooperation with “COWI” (Denmark). It includes 2.6 km long standard gauge railway line in Riga from Lāčplēša Street to Jelgavas Street, 6 new railway overpasses over Lāčplēša, Dzirnavu, Prāgas, Maskavas, Mūkusalas and Jelgavas Streets, as well as a new 1 km long bridge over the River Daugava and Little Daugava. The existing railway embankment will be removed in sections between Central Coach Station and Stockmann department store and between Riga Central railway station and Elizabetes Street. Railway traffic will be diverted on overpass. A new street will also be built in Riga: Elizabetes Street will be connected with Timoteja Street. Whereas, removal of railway embankment will allow for visual and functional connection of two parts of the city of Riga: Old Riga with Maskava Suburb, from the side of Old Riga opening a view to Riga Central Market. For the pedestrian access passenger tunnel under the railway tracks (so called tunnel C) will be reconstructed.

Along with the introduction of standard gauge railway to the centre of Riga, thus increasing the number of railway tracks, station infrastructure compliant with modern requirements and aesthetically attractive station infrastructure and multi-modal transport hub will be created. The four current platforms will be added by a new one: all five platforms will be elevated, thus improving convenience of users of both gauge railways, when boarding the trains. Canopies will be built over the platforms. Each platform will have access stairs; furthermore, 8 elevators and 26 escalators will be arranged. New premises of the area of approximately 6000 m 2 for waiting rooms, facilities, cash-desks, luggage storage etc. will be built above the platforms. Turnstiles will be arranged for the ticket holders to access to the platforms.

Within the framework of the multi-modal transport hub, much more convenient connections with public transport will be created for the passengers: area for bus and minibus stops will be arranged on the first floor of the station, furthermore, a place for the development of multi-storey car parking is provided for. Whereas, for the purposes of mobility of pedestrians and cyclists, a new path will be built on the new bridge over the River Daugava connecting both banks of the river.

Financing of this project within the limits of 81–85% is provided with the co-financing by the Connecting Europe Facility of the European Union, while the remaining funds are provided from the state budget of Latvia.

Pace of the tender

Let’s remind that, on 21 April 2017, the implementer of Rail Baltica project in Latvia – company Eiropas Dzelzceļa līnijas announced an international tender in two stages “Development of Construction Design and Construction Works of Rail Baltica Riga Railway Bridge, Railway Embankment and Riga Central Passenger Station Complex Construction” for the provision of the development of construction design, author’s supervision and performance of construction works. During the Phase 1, qualification applications were received from 7 international associations, including the major construction companies of Latvia. During the Phase 2 of the procurement, which was announced in August 2018, competition was continued among 6 international associations – highly ranked professionals with global experience in design and construction of railway and bridge infrastructure.

About the association of persons BESIX RERE GROUP

The association of persons “BESIX RERE GROUP” includes companies N.V. BESIX S.A. (Belgium) and LLC (SIA) “RERE BŪVE” (Latvia). Shareholders of these companies are with considerable experience in design and construction of railway, public and private buildings and objects. Significant works have been implemented during the reconstruction of Utrecht railway station (area exceeding 23,000 m²) in the Netherlands, as well as implementation of the Regional Express network in Brussels.

Bridges have been designed and constructed, for example, Al Maryah bridges (4 bridges of the total length of 1.4 km) in Abu Dhabi and other complicated infrastructure objects.