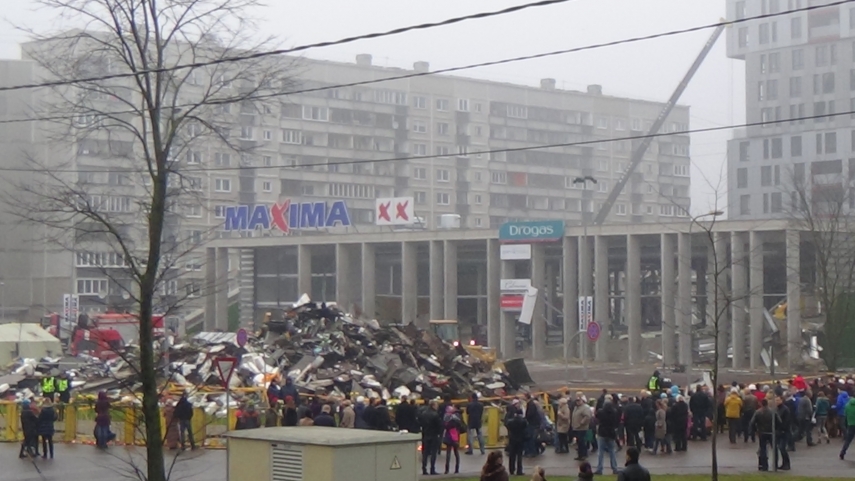 The Maxima supermarket in Zolitude after its collapse in November 2013 [Image: Creative Commons]

The Latvian prosecutor's office has brought charges against eight persons in a criminal case relating to the collapse of the Maxima supermarket in the Riga district of Zolitude which killed 54 people in November 2013, according to a statement posted on the prosecutor office's website.

Among the accused are construction engineer Ivars Sergets, construction inspection expert Andris Gulbis and construction supervisor Martins Draudins, their lawyers confirmed to LETA. They also said that Sergets, Draudins and Gulbis were accused of violations of construction regulations.

Now the court will have to evaluate every defendant's responsibility. Their lawyers claimed that it was very odd that none of the people who had counterfeited documents, assembled the sections of the supermarket, or had been hired to work as designers while uncertificated had been accused, although they declined to reveal who exactly they were referring to.

According to the statement on the prosecutor office's website, the prosecutor's office has launched criminal prosecution of eight persons in the Zolitude case. Five persons have been accused of violations of construction rules, which resulted in the collapse of the building, and three officials are accused of negligence.

Janis Junkers, lawyer for the architect Andris Kalinka, who designed the collapsed Maxima supermarket in Zolitude, declined to tell LETA whether charges had been brought against Kalinka.

As previously reported, at the beginning of April the State Police asked the prosecutor's office to bring charges against eight persons.

The police asked the prosecutor's office to charge five persons pursuant to Section 239 of the Criminal Law - violations of construction provisions, and three other persons with failure to act by a state official (Section 319).

The police also asked the prosecutor to keep restraints on properties of four legal entities in place. The other criminal case on the Maxima supermarket collapse in Zolitude, which deals with violations of safety regulations at the supermarket, was handed over to the prosecutor's office earlier this week. In this case, the police want one Maxima employee to be held responsible.

The total amount of compensation claims in the two cases is over 100 million euros.