British creative industries guru: ‘The Lithuanians don’t like to blow their own trumpet’ 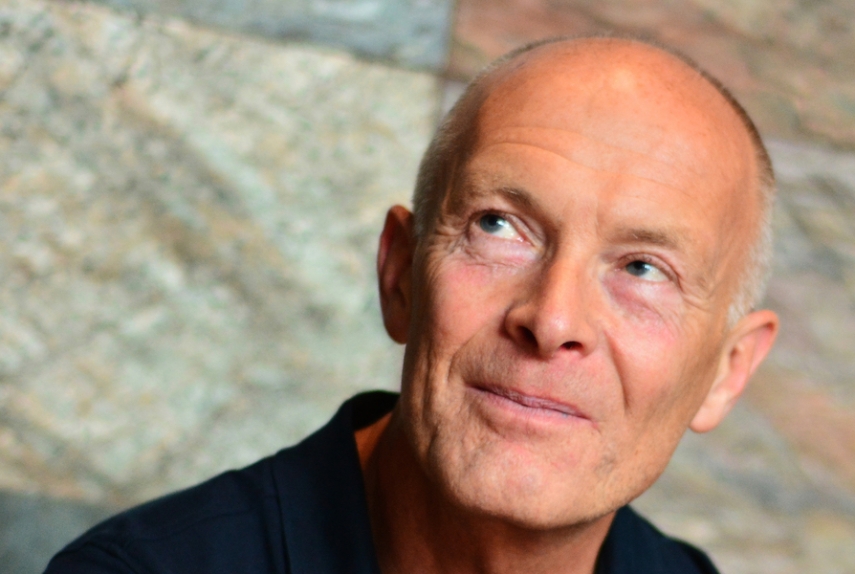 David Parrish is a well established authority in the world of creative industries. “T-Shirts and Suits”, Parrish’s guide to the business of creativity, has been published in 13 languages. He claims to have lost count of all the countries in which he’s worked. In his rough estimate, he’s consulted, spoken and run training courses in over 50 countries including in Southeast Asia, South America, North America and Europe. Between Dec. 7 and 9, he was in Lithuania teaching on the subject of Product Innovation Development to MSc Students of Creative Entrepreneurship at Vilnius University Business School. Before flying home to England, The Baltic Times sat down with him for a talk about creative entrepreneurship and its manifestations in the Baltic States.

Is this your first visit to Lithuania?

It’s not. The first time I came here was in, I think, 2008 or 2009 when my book “T-Shirts and Suits: a Guide to the Business of Creativity” was published in Lithuanian. I was invited to come to Vilnius to present the book at the Vilnius Book Fair. I’m delighted that my book is available as an e-book in Lithuanian. It’s clearly had some impact in the country. People have mentioned it to me even on this visit.

What have they been saying to you?

The underlying theme that people appreciate about the book here in Lithuania is that it helps them understand how they can define success for themselves, how they can build a business on their own terms according to their own values. They don’t have to do business conventionally. In most countries, business has a bad reputation in the sense that we see people getting rich at the expense of other people. We see a certain amount of corruption in business. In some industries, business is a dirty word. And that’s one of the reasons that puts creative people off business. But when they read, in my book, that they can do business in their own ways, they can use the tools of business according to their own values and I think that gives them greater encouragement. Several people mentioned that to me during my visit this time.

The people I’ve met are very passionate, have really cool ideas and are very interested and active in building enterprises. That’s very impressive and equal to or more than equal to anywhere else I can think of. The contrasts, I suppose, have to do maybe with national character. It’s difficult for me to comment on that absolutely objectively, but the Lithuanians themselves tell me that their national character is to be quite quiet, sometimes even shy. People don’t like to blow their own trumpet. Perhaps it’s not accepted. There’s a gentleness of character, a quietness that I’ve experienced. But at the same time, I think that this shyness of character, in a way, belies the ambition. I don’t think Lithuanians are timid people or shy about going into business or selling their products or promoting themselves. It’s perhaps just an interpersonal thing, some sort of convention or social etiquette about how we relate to each other in groups. But I don’t think it holds Lithuanians back from being entrepreneurial. The society has changed, of course, over the last 20 years. There isn’t a long history of entrepreneurship such as there is in some countries in Western Europe, in my country, the UK, and certainly, of course, in the United States where entrepreneurship has been deeply embedded into the national psyche for a long time. I think Lithuania has gone through changes. And so perhaps there’ll be more changes in the future as people get used to working within the European Union, within more modern and more open societies. So that will be interesting to watch. But I think you’re at a very interesting point now where creative entrepreneurs can really take advantage of the opportunities open to them both in Lithuania and within the European Union.

What are those opportunities?

I think the opportunities for Lithuanians lie with export. Lithuania is clearly a small country and, of course, small countries have a disadvantage in that their internal market isn’t very big. But actually, it’s ironically an advantage because it means that when businesses are set up, even from Day One, they have to think beyond their own borders about their products if they need a large market. It’s an extra thing to consider at the early stage. If businesses are formed at the very beginning with an international outlook and an understanding that they’re going to export, with that international perspective then I think it gives them a huge advantage as they increase because, in contrast, larger countries such as the UK or perhaps France or Germany have quite a large internal market and so they can just be comfortable for a while as they expand and grow within their own country. But when they need to expand to other countries, that can actually be a difficult transition because all the mindset, the systems, the procedures have been focused on just one country. So I think Lithuania as a small country has that advantage to export from an early stage. I’ve noticed that the level of English is very high here, so that people are virtually bilingual, and this puts them in a very good position to be exporters throughout Europe and throughout the world.

Do you feel that people in Lithuania have a good understanding of creative entrepreneurship as a business opportunity?

I guess within a wider society of Lithuania there’ll be the attitude that asks “how can creativity and business combine?” Creativity is about the arts, about national institutions, the opera house, the theatre, which is something quite different from business. Business, on the other hand, is regarded as something much more functional, much more focused on money etc. Among the larger population there would certainly be that confusion or lack of understanding or the simple question “how can creativity be combined with business?” I have to say that to some extent this is also the case in other countries including countries that aren’t post-Soviet societies. I think that, to a lesser degree of course, in my own country, in the UK, there’s still that lurking question about how can creativity, which is understood to be artistic creativity, be combined with business. Aren’t the two separate and very different things? I think that the question still exist generally and perhaps particularly in post-Soviet societies such as Lithuania. But when it comes to creative entrepreneurs, I think they look at their creativity in a business context. They’re seeing business opportunities for new products, new services, and they’re developing their products and services using their creativity within a market context. They’re actually producing things because they can sell them. They’re producing things because they’ve identified a problem that needs solving. They’re producing new products because it’ll make them some money. Creative entrepreneurs aren’t those who want or expect to be paid because they have a talent with literature or a talent in singing or in theatre. There’s a fairly good understanding of what creative entrepreneurship is, even if they might not be using the term. People know that they can get paid for the stuff they make if they get the business system right, and that’s pretty much what I help them with. That’s what we were talking about at the course at Vilnius University Business School.

Have you worked with creative entrepreneurs in either of the other Baltic States?

In what ways is Estonia more advanced that the UK when it comes to the creative industries?

The UK is regarded as a leader in the creative industries. I think there’s a lot of justification for that, but I also think there’s a lot of overstatement because many other countries are doing amazing things. We don’t have a monopoly on the creative industries. Estonians have some very good business support systems, the hubs and incubators. We visited similar institutions in Liverpool, Edinburgh and Cardiff. They were impressed by what they saw, but they also came away with the confidence that what they were doing wasn’t miles behind and, in some cases, better. Estonia prides itself on being a very digital economy. It’s clearly a world leader in many respects. So when we went to various business centres or when we met businesses in the digital sphere, television companies, people working on computer games, people in the UK were commenting on how good or not so good the broadband was, and at that point the Estonians were just smiling and smirking with pride because they’re very advanced in that respect. So on the digital side, Estonia is definitely more advanced than the UK.

In your book, you talk about the importance of a personal definition of success in creative entrepreneurship. How do you define success for yourself?

My definition of success as a business person is that first of all it has to work financially. If you go bust, you don’t have a business.

I’m not saying that money is the most important thing, but clearly it’s there, and everybody mentions money in their definition of success. They say, “I want to make enough money to live a comfortable life”. And that’s important to me. I need money to survive, and money allows me to do things. So the overall picture has to be profitable. But within that, I can mix different projects. I can cross-subsidize. I can have hugely profitable projects and some projects that are less profitable. I can make that decision about which I do. But I always have an eye on the finances to make sure I don’t go bust, to make sure there are no cash flow problems, to make sure I get paid and still have money in the bank to invest in new products, services, and that kind of rainy day stuff. Another aspect of success to me is that I’m my own boss. I can choose my projects, I don’t have to answer to a Board of Directors or a boss above me who can stop me from doing things. I think, also, there’s something for me in the satisfaction I get from empowering creative entrepreneurs. You might say there’s a teacher within me, somebody who likes to convey information, to empower people, to help people learn. I get a great deal of personal satisfaction from that. So that helps me feel successful. I guess I’ve finally in my life found an area which suits me, which is, I guess, you can call it self-actualization where my work and my life are in harmony with each other. I love the kind of work I do and I love that I’m not waiting for 5 p.m. on Friday for it to finish so that I can live a happy life because I live a happy life in doing my work. For me, success is the harmony between all those things, in having a successful business that I love doing and that seems to get better and better.

Your flight is only a few hours away. What are the most memorable things you’re taking back home from this visit?

The first thing is the fantastic hospitality I’ve had here, the welcome when I arrived, but actually a lot of the work before I arrived to arrange things, to arrange my accommodation, transport, all that. People are extremely hospitable and welcoming. I really feel as though I’m appreciated and that people care. Secondly, the master’s degree students at the Vilnius University Business School have been really interested in learning from me and from my experience, and that’s been a delight to work with them interactively, talking and discussing things with mutual respect. Thirdly, I really enjoyed the food. The Lithuanian food I really do like, and that’s another happy memory and another reason to come back.