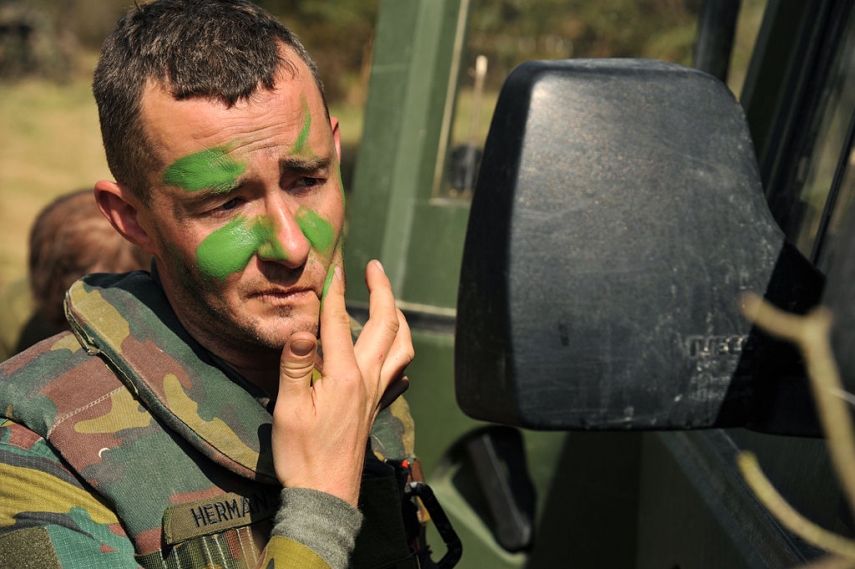 TALLIN – Members of the Chasseurs Ardennais battalion of the Belgian armed forces are to join the prepositioned NATO battalion in Estonia at the beginning of next year.

Approximately 200 members of the Chasseurs Ardennais battalion will arrive in Estonia, the unit will be equipped with infantry fighting vehicles (IFVs), SPIKE antitank missiles and 120-mm mortars, and will arrive here complete with a combat engineer and combat support unit. The unit is about to arrive with approximately 100 pieces of combat equipment, including 35 IFVs and 65 support vehicles, the daily Postimees reported on Monday.

The home base of the Belgian Chasseurs Ardennais battalion is located in Wallonia in southern Belgium, more specifically in the wooded and mountainous Marche-en-Famenne. Their motto is "Resist and bite!" and their insignia features the head of a wild boar on their caps.

In response to a question by Postimees on why it is namely Belgians who will come to the Tapa military base, Liis Mure, head of the department for the EU and NATO at the Estonian Ministry of Defense, said that the involvement of new allies in the prepositioned battle group takes place in cooperation between NATO, Estonia and the leading country of the unit stationed here, the United Kingdom.

"The most important criterion is that they be able to fulfill the military tasks set by NATO, which foremost are deterrence and, if needed, contributing to defense," Mure said. In simpler terms, the soldiers to be deployed to the prepositioned battle group must be both trained as well as equipped for complete battle readiness. "Previous cooperation experiences, which will make interoperability easier, will also play a role," Mure said.

Of all the allies, the United Kingdom has been involved in protecting Estonia the longest. The United Kingdom is also the leading country of the prepositioned NATO battalion in Estonia, having assumed the indefinite obligation to deploy soldiers and equipment, serve, practice with and, if necessary, go into battle next to members of the Estonian defense forces.

When it comes to the United Kingdom, the reasons for coming to Estonia were historical ties and joint service in Afghanistan. As Mure recalled, Estonians and Brits for a long period of time were together in the Helmand province, one of the most difficult areas in Afghanistan, and an Estonian infantry unit is now serving with the British in Kabul.

The Belgians have become familiar to Estonia thanks to the fact that their anti-aircraft unit has regularly attended large-scale exercises, like the Kevadtorm (Spring Storm) and Siil (Hedgehog), held here. Belgium has on multiple occasions also participated in the Baltic air policing mission, both in 2016 and 2017, out of the Amari air base.

The members of the Chasseurs Ardennais battalion will remain in Estonia until mid-May and will also participate in next year's Spring Storm. They will be replaced once again by French troops, of whom there will be approximately 300. The last time the French served in Estonia was in 2017. This year, the smaller partner of the British in the Estonian battalion is Denmark.

NATO at the Warsaw summit in 2016 decided to deploy approximately 1,000-member battle groups of allied forces to the Baltic countries and Poland. The battle group in Estonia is led by the United Kingdom, while other countries serving as part of the battalion currently include Denmark and Iceland. Canada leads the battle group stationed in Latvia with other participants including Albania, Spain, Italy, Poland, Slovakia, Slovenia and the Czech Republic. Germany is the leader of the battle group in Lithuania, while troops from Belgium, the Netherlands, Iceland, France and the Czech Republic are also stationed there. The Polish battle group is led by the United States and other participants include Croatia, Romania and the United Kingdom.