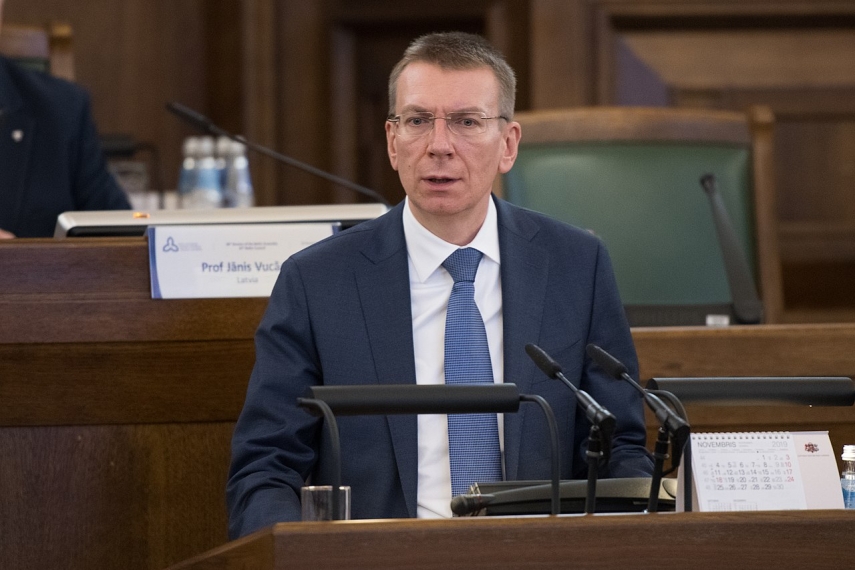 RIGA - Belarus' involvement in the war started by Russia against Ukraine means that Belarus is also an aggressor and must be sanctioned just as harshly as Russia, Latvian Foreign Minister Edgars Rinkevics (New Unity) believes.

As LETA was told at the Foreign Ministry, Rinkevics met with the foreign ministers of Lithuania, Estonia and the UK in Vilnius on Thursday to discuss developments in Ukraine and further steps to be taken in response to the military aggression launched by Russia and Belarus.

Rinkevics pointed out at the meeting that, with its blitzkrieg in Ukraine failing,  Russia is now launching more massive attacks, destroying civilian infrastructure and killing civilians. The ministers were unanimous on the need to mechanisms for enforcement of international law should be applied to hold Russia accountable for war crimes it had perpetrated.

"The Western partners must forge ahead with a vast humanitarian aid effort as well as supplying lethal and non-lethal equipment for the needs of the Ukrainian armed forces," Rinkevics said.

He underlined that Belarus' involvement in the war against Ukraine meant that Belarus was an aggressor of the same kind and must be targeted by sanctions on par with those imposed on Russia.

Rinkevics welcomed the strong British position vis a vis Russia and Belarus, and assistance given to Ukraine; he pointed out that a strong and internationally coordinated diplomatic, political and economic pressure should be continued against the aggressor. The Latvian minister also commended support provided by the UK and an increase in its military presence to reinforce NATO’s eastern flank.

In a bilateral exchange of views with the Secretary of State for Foreign, Commonwealth and Development Affairs of the United Kingdom, Elizabeth Truss, the foreign minister emphasized that cooperation between the two countries in response to Russia-Belarus aggression was a vivid example of how to put in practice the Declaration on Bilateral Cooperation between Latvia and the United Kingdom signed in December 2021. In the context of global events, it is of special importance at this point to continue the successful cooperation on combating disinformation.