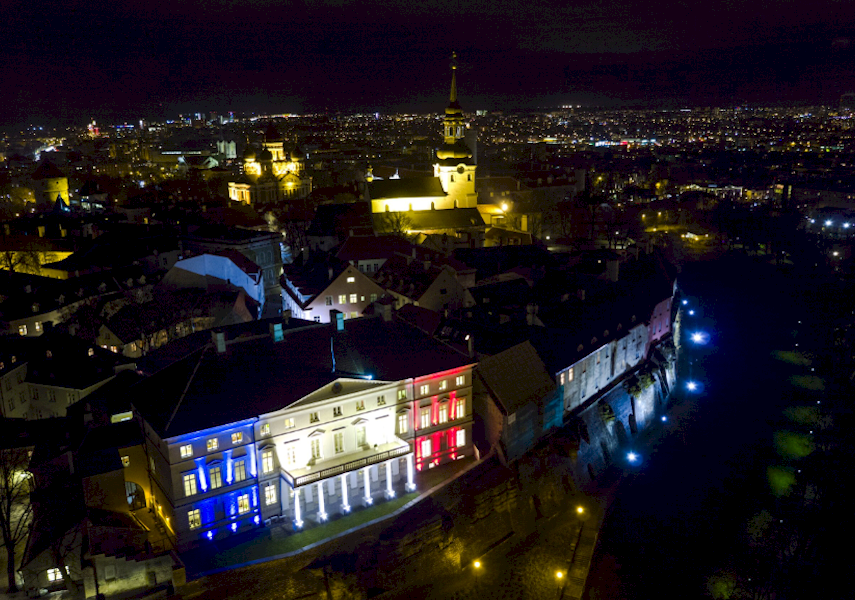 TRICOLORE: Stenbock House, Estonia’s main government building, lit up the Tallinn skyline over the weekend with the red, white, and blue of the French flag - a show of condolence and solidarity after the terrorist attacks in Paris on Friday.

The pavements in front of the French Embassies in Tallinn, Riga, and Vilnius thronged with thousands of people over the weekend, as politicians and public alike filed past to lay flowers, leave messages, and light candles — a mark of commemoration and respect for the victims of the Paris terror attacks of Friday Nov. 13.
Over the weekend, Paris’s Eiffel Tower shut off its lights in mourning while landmarks around the globe blazed with the red, white, and blue of the French Tricolore.

It was a spectacular gesture of solidarity to the French people, and landmarks in the Baltic region played their part. The Hill of the Three Crosses in Vilnius was lit up with the tricolore on Saturday; a French flag was flown from Europe’s highest TV tower in Riga; and in Tallinn, the main government building, Stenbock House, lit up the cityscape of the Estonian capital with the Tricolore.

“We are all French”

Estonian Prime Minister Taavi Roivas tweeted a picture of the building, which is usually spotlit with white lights at night, and said: “This is our way to show that tonight we are all French.”

When The Baltic Times visited Stenbock House around 10 p.m. Saturday, people were still making their way through the drizzle to pay their respects. The flag was fluttering at half mast in the breeze and candles were hissing in the rain.

One woman, who declined to speak to The Baltic Times, was wiping tears from her eyes as she put her candle down on the pavement outside the embassy.

Drawings had also been left outside. On one someone had written “Vive la France” over a French flag while another was a child’s picture of the Eiffel Tower on a sunny day with a heart next to it.

In Riga and Vilnius, similar scenes. One French couple, speaking to The Baltic Times outside the French Embassy in Vilnius, said they were overwhelmed by the support they had received.

“The reaction of the people of Vilnius to what happened in Paris is really extraordinary,” said Claude Depp, who was visiting the Lithuanian capital with his wife for the weekend. “All these candles and flowers … We did not expect that. We really admire the way they express their solidarity. The friend of our son was killed in Bataclan that night.”

Baltic leaders were quick to offer their condolences to France, and their condemnation of Islamic State (ISIS) backed terror attacks which left 132 dead on the streets of Paris and hundreds more injured.
Lithuanian President Dalia Grybauskaite issued a statement on Saturday condemning the attack and calling for retribution.

“Such horrific brutality cannot be justified and must face rightful justice and condemnation,” the statement reads.

The Lithuanian foreign ministry also issued a statement strongly condemning the attacks, calling them “barbaric acts” and a “cruel attack against humanity and civilisation.”

Lithuania, the statement reads, will “remain a staunch and reliable ally of France and all the international community in the fight against terrorism.”

The Latvian and Estonian presidents echoed these sentiments.

Estonian President Toomas Hendrik Ilves expressed his shock at the attacks in Paris, calling them also “an attack on our fundamental values.

Though hundreds of miles away, aftershocks are visible throughout the region among the population. Those with friends and relatives living in or visiting Paris were initially alarmed as the first reports came in on Friday. Diana Pauna, pro rector of The Stockholm School of Economics in Riga — in charge of looking after Erasmus students sent to Paris — said that she was “aware that we send our students abroad without proper preparation for emergency cases.”

“The tragedy in Paris has shown that students need to be instructed and provided with guidelines,” she said. It is just one small instance of how Europe’s citizens will be going through a period of greater precaution.
Some politicians have already tried to capitalise on these heightened worries surrounding the terrorist attacks to push their own agendas.

Many were quick to use the terror attacks as a prompt to return to the ongoing discussion on the migrant crisis, particularly so among the right wing parties in the Baltic.

Citing the bloodshed in Paris, the opposition Estonian Conservative People’s Party (EKRE) has demanded the Estonian government to follow the example of Poland and halt the admission of refugees and migrants.
“The government must acknowledge its responsibility in ensuring the security of Estonia,”  EKRE chairman Mart Helme said in a statement. “While our thoughts are with the victims, prompt action has to be taken so that terror would not reach Estonia. The security of the people of Estonia and the fate of Europe is in our own hands.

“The policy of open doors and multiculturalism in the European Union has failed long ago,” he added. “Instead of seeing to the security of the people, the government is engaging in slogan-like propaganda of tolerance, labeling of opponents and laying one’s hopes on someone else. An attitude like this is posing a concrete danger to the safety of all of us.”

Similar thoughts were voiced by Latvia’s right wing National Alliance, a junior partner in Latvia’s coalition government. But it was not just the right wing who were reacting to the terror attacks with heightened focus on the migrant crisis.

After a meeting of the National Security Council on Saturday, Latvian President Raimonds Veijonis warned that Latvia would not be prepared to take in any more EU quota refugees than the country has agreed to take in already, unless there is significant strengthening of border controls, and the EU steps up its capabilities to deport migrants who do not qualify for refugee status.

“I have repeatedly stressed that Europe needs an effective mechanism to send back (failed aslum seekers), strengthen external borders, and reinforce the fight against organized crime and people traffickers. Until this work is done in Europe, Latvia sees no opportunities for additional commitments for the resettlement of asylum seekers,” Veijonis told reporters Saturday.

Dovile Sakaliene, director of the Lithuania-based Human Rights Monitoring Institute, believes the terror attacks have placed a long existing societal divide on the migrant intake question into an ever sharper relief.
“Naturally, the mood swings can be quite unpredictable after such (an) unprecedented inhuman act of terror,” she tells The Baltic Times. “However, it is obvious that position of our political leaders, their ability to listen to the voice of reason and engage into the interactive dialogue with society shall decide whether we shall take on the Polish approach or move towards compassion for the victims of ISIS and proportionate security measures that would be applied with the respect for human dignity.”

While Estonia’s prime minister Roivas has been calling for tougher EU external borders, he preferred to focus on how Estonia could support France in its battle for vengeance against Daesh, also known as ISIL or ISIS, who were the perpetrators of the attack. Estonia is ready to help its allies, if its aid is requested to solve the crisis in Syria, Roivas said in his speech before parliament on Tuesday.

“We are ready to make an input, just like we said together with the minister of defense yesterday, into training missions,” Roivas said answering MPs’ questions after his speech on Estonia’s EU policy.
Estonia cannot contribute to the air strikes staged against the ISIS group in Syria, the prime minister said. “But if allies ask, we can discuss future steps,” he said.

The prime minister said Estonia is not afraid of possible terrorist attacks in the event of its joining military actions against ISIS.

“Estonia is in the habit of helping its allies when allies need it, and we must have the readiness to do it,” Roivas said.