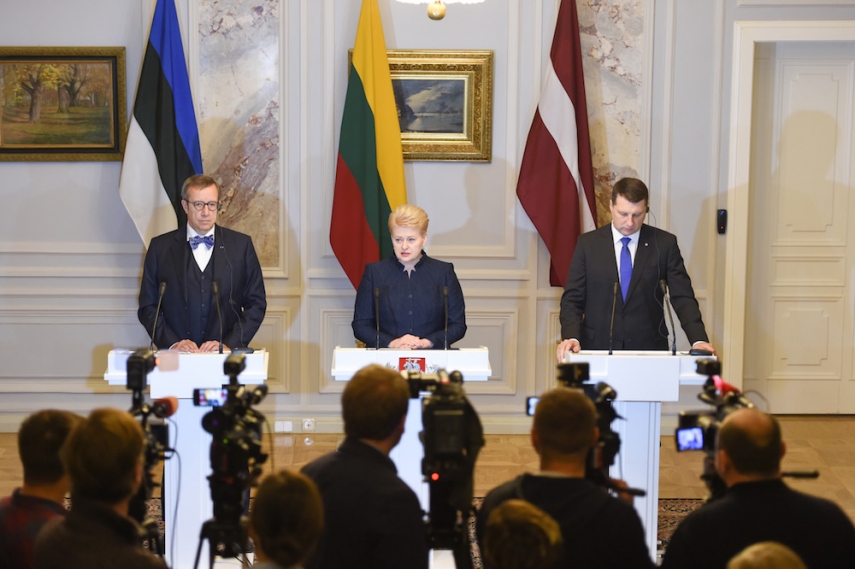 In the wake of the Paris attacks and the migration crisis, the leaders of the Baltic states met in Lithuania on November 20, and called for the world to not forget the ongoing situation in Ukraine, and the annexation of Crimea.

The warning by the presidents and parliamentary speakers of the Baltic States came in response to considerations that the West and Russia could unite their effort in the fight against the Islamic State group in Iraq and Syria.

"With all the focus these days on terrorism and on Daesh, we have to still keep in mind that the largest act of aggression since the end of World War II is a continuing process with the annexation of Crimea," Estonian President Thomas Hendrik Ilves said. "And I would say that I think we all concerned about this sort of falling behind or some kind of development in which we stop paying attention to Crimea, or we even forgive the annexation because of the newer threats. We cannot allow that to happen."

Latvian President Raimonds Vejonis agreed and said that "the critical situation in the European Union and around its southern borders should not take our attention away from Ukraine."

During a joint press conference with his Lithuanian and Estonian counterparts in the western Lithuanian resort of Palanga, Vejonis said that "it is our common task to keep the issue of Ukraine high on the EU agenda until the full resolution of the Minsk agreements. I think it is very important not to forget Ukraine. At present, everybody is just talking about refugees and terrorism but Ukraine is still a hot topic“.

The position was also echoed during the Vilnius meeting of the speakers of the three Baltic states.

"New geopolitical challenges and acts of terror shift the focus from the key agenda of the Baltic states we have worked together on for so many years,” said Lithuanian Parliamentary Speaker, Loreta Grauziniene. “It includes the Eastern Partnership program. We, the three speakers, believe that our duty is to further keep this direction and not to let even the most difficult events overshadow the Eastern Partnership program.”

"We don’t have the moral right to leave the Ukrainian people, who are fighting for the democratic path to the European family, alone in this difficult situation," she added.

Her Latvian counterpart, Inara Murniece, thanked her Baltic counterparts for their unity on the Ukrainian issue.

"I would like to thank my colleagues for their joint position on Ukraine,” she said. “We believe that the Ukrainian issue is very much related to security.

Speaking about events in Ukraine, we cannot allow even these tragic events taking place globally to overshadow the Ukrainian crisis. Therefore, the speakers of the Baltic and Nordic parliaments will go to Ukraine and meet with Ukraine's top officials,” she continued.

"If some kind of new problem arises, then sometimes the old ones are forgotten by the media - you don't see them in the news, and somehow people forget that these problems exist,” said Eiki Nestor, the president of Estonia’s parliament.

“Even now after the tragedy in Paris, this understanding of new democracies, what the three Baltica and Nordic states (have), we’re trying to help Georgia, Ukraine and Moldova to develop, it's very important, especially in Ukraine's case.”