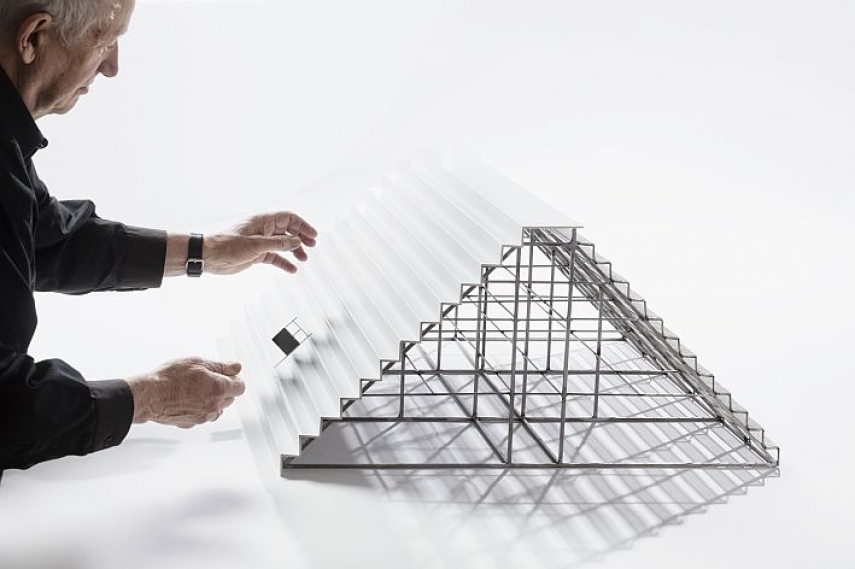 A solo exhibition 136 Steps by Andris Freibergs will be on view in the Creative Studio of the ARSENĀLS Exhibition Hall of the Latvian National Museum of Art in Riga (Torņa iela 1, 2nd floor) from 19 September to 17 November 2019.

In 2016, poet Inese Zandere and composer Ēriks Ešenvalds’ opera The Immured was produced at the Latvian National Opera and Ballet Theatre. It is the tale of the Castle of Light. However much was built during the day, collapsed at night. According to the myth, in order for the building to stand firm, it required a sacrifice, a blood sacrifice, because the soul resides in blood. Thus, the building demands the soul of a living person. However, a human shadow can also be immured, in which case the person will either die or wander the Earth as an empty shell. Therefore, one should be wary of walking past buildings. In the aforementioned opera, the decisive blood sacrifice turns out to be the Architect and Librarian’s unborn and spontaneously aborted child, “the invisible in
geometry” (Inese Zandere). The true victim is the dearest of all, i.e. love. The Castle of Light rises up amidst the glow of the denial of love, leaving the pain of loss, emptiness and loneliness. Is the sacrifice worth the benefit?

In this mystery, director Laura Groza-Ķibere wished to accent how people mature, while set designer Andris Freibergs worked openness to destiny and seclusion into the opera space; on the forestage with a lowered curtain, thus compelling the audience to hear the claustrophobia of the embryo and feel “the milk of death which tastes of blood” (Inese Zandere). In the finale, Andris Freibergs performed his own “small task” – the “Stairway to Heaven”, which for many years he had set first year students at the Art Academy of Latvia. The origin of the task is related to the Old Testament in which we read: “He [Jacob] had a dream in which he saw a stairway resting on the earth, with its top reaching to heaven, and the angels of God were ascending and descending on it.” (Genesis, 28:12).

Both the sacral text and the poet’s libretto envisage the unity of physical and spiritual world. Therein, the image describes the cosmos: the stone under Jacob’s head is transformed into God’s house and the books under his head become the Library. In the opera production, the spatial motif stretched into a white stairway spanning the entire width of the stage. Using the video stairway
continued upwards to infinity. Along it, youngsters found themselves perennially climbing in the Castle of Light.

The ARSENĀLS building, where Andris Freibergs’ exhibition is taking place, was built in Jēkabs Parade Ground in 1831 as a munitions warehouse, which epitomized the economic might of the Russian Empire, combining the neoclassical architectural ideas of Saint Petersburg and Riga.

Following Jacob’s dream, Andris Freibergs adds the quotient of the actual space: ARSENĀLS’ 56 steps to the quotient of his own life span: 80 years, thus obtaining an autobiographical temporal space of “136 steps”. Before ascending, the viewer is invited to shake off the dust of pride in the light-filled space adjoining the steep stairs. The exhibition also includes a fragment of a director Krista Burāne’s film The Fairytale of Empty Space (2017).

Andris Freibergs (born 1938) debuted in the theatre in the 1960s, at a time when the political course in the USSR was changing in the shade of the Cold War, when the gradual “thaw” resulted in the publication of Russian language translations of works by Williams Saroyan, Jean-Paul Sartre, Jean Anouilh and other contemporary foreign authors, and the blossoming of poetic and metaphorical theatre. In 1967, the public at the Moscow Manege exhibition hall rediscovered Soviet Avant-garde theatre of the 1920s in installations. The stage space was opened up to contemporary art – conceptualism, performance, photography, cinema and household objects as signs. Materiality was illuminated in a new light, the memory of which was integrated into a poetic playground.

In Latvia, director Māra Ķimele’s production of Tennessee Williams’ play The Glass Menagerie with Andris Freibergs’ metal cages at the Liepāja Theatre turned out to be a pivotal event in set design. The opening performance took place on 8 February 1969, preceding director Pēteris Pētersons’ adaptation of a dramatization of Fyodor Dostoyevsky’s novel The Idiot with Kurts Fridrihsons’ “perforated” space, which was performed for the first time at the Daile Theatre three months later – on 8 May.

The set designer turned his attention to dramatic conflict, the theme of leitmotif and degrees of emotional experience, as opposed to just setting the stage for action, as was the case in the theatre of Socialist Realism. Working with a concept, the artist became an equal partner in the triangle of dramatist-director-set designer. In Andris Freibergs’ case, emotional range is of utmost importance.

Andris Freibergs has created the set design for over 200 productions at Latvian theatres and abroad. He has been the Principal Set Designer at the Latvian National Opera and Ballet Theatre since 1993. He was previously the Staging Artist at the Drama (now National) Theatre (1965–1973) and the Principal Set Designer at the Youth Theatre (1973–1992).

In 1971, Andris Freibergs was appointed as a set design educator at the Art Academy of Latvia. In 1994, he became Head of the Set Design Department (until 2013). He is now Professor Emeritus.

Andris Freibergs has been awarded the Order of the Three Stars (2003), a Silver Medal at the Prague Quadrennial of Performance Design and Space for his stage design for Credo ballet with music by K. Penderecki and J. S. Bach at the Estonia Theatre (1995), the Great Latvian Music Award for the production of G. F. Handel’s opera Alcina (1998, director Kristina Wuss), the Award of Estonia’s Best Set Designer for the dramatization of Ivan Turgenev’s novel Fathers and Sons at the Tallinn City Theatre (2003, director Adolf Shapiro). In addition, Andris Freibergs has received seven Spēlmaņu nakts awards and the highest award in Italian theatre Il Premio Ubu for the dramatization of Jaroslaw Iwaszkiewicz’s story The Maids of Wilko (2010, director Alvis Hermanis), two Gold Medals at the Prague Quadrennial for students’ exhibitions (2007, 2011) and the special Set Design Teacher’s Award (2015). Andris Freibergs is an honorary member of the Russian Academy of Arts (2018).

This is the artist’s fifth solo exhibition.