Amber Grid signed the agreement with a Polish company Izostal 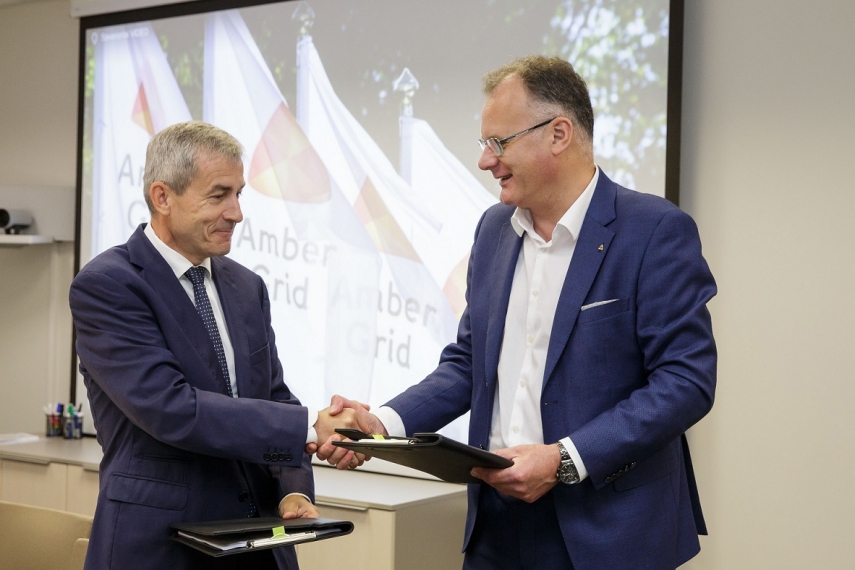 Yesterday Lithuanian natural gas transmission system operator Amber Grid entered into the agreement with a Polish company Izostal S.A. for the purchase of steel pipes to be used for the construction of the international gas pipeline interconnection GIPL. The value of the contract is EUR 26.4 million (exclusive of VAT). The decision to enter into the agreement was approved by the extraordinary general meeting of Amber Grid shareholders that was held on the 23rd of July.

“I am delighted that in implementing the GIPL project we will work with a reliable Polish company Izostal that has a considerable experience in implementing gas pipeline projects across Europe and beyond. This will be the largest recent project of gas infrastructure in the Baltic states. We hope to see the first pipes in the route of the GIPL gas pipeline already this autumn”, – said Saulius Bilys, the CEO of Amber Grid.

“We are very satisfied that we have signed a contract for the delivery of pipes for the interconnector Poland-Lithuania. As a Polish manufacturer, we undertake the obligation to be an example and a leader on high standards in the implementation of orders for Amber Grid. Both the terms of the contract and the technical requirements for deliveries are very strict, it shows Amber Grid's extensive experience in choosing the supplier. The conclusion of the contract is the crowning achievement of our long-term commercial relationship“, – said Marek Mazurek, the CEO of Izostal.

Procurement procedures for GIPL project were launched in 2018 summer. Four companies submitted final offers for the project pipeline competition. The winner of the international procurement will be responsible for the supply of steel pipes for the 165 km long gas pipeline in the territory of Lithuania. The 700 mm diameter pipeline will be constructed from the Jauniūnai Compressor Station in the Širvintos district to the Lithuanian-Polish border in the Lazdijai district.

The results of the second public procurement of the GIPL project related to the procurement of construction works will soon be announced. After signing both pipe and construction works agreements, GIPL pipeline construction works in the territory of Lithuania will start. The GIPL pipeline is expected to be completed by the end of 2021. According to the project, the length of the pipeline will be 508 km, of which 165 km will lie in the territory of Lithuania. The total investments of the GIPL project is about EUR 500 million. The investment on the Lithuanian side will amount to EUR 136 million.

Amber Grid implements a project of common interest of the European Union “Gas Interconnection Poland–Lithuania“ (GIPL) together with the Polish gas transmission system operator GAZ-SYSTEM S.A. Based on the decision of the Agency for the Cooperation of Energy Regulators (ACER) for Cross-Border Allocation of the Project Costs, in addition to the EU financial support, the construction works of the GIPL project will be financed by Lithuania, Latvia and Estonia. These three countries will cover a part of the GIPL infrastructure costs in the territory of Poland.