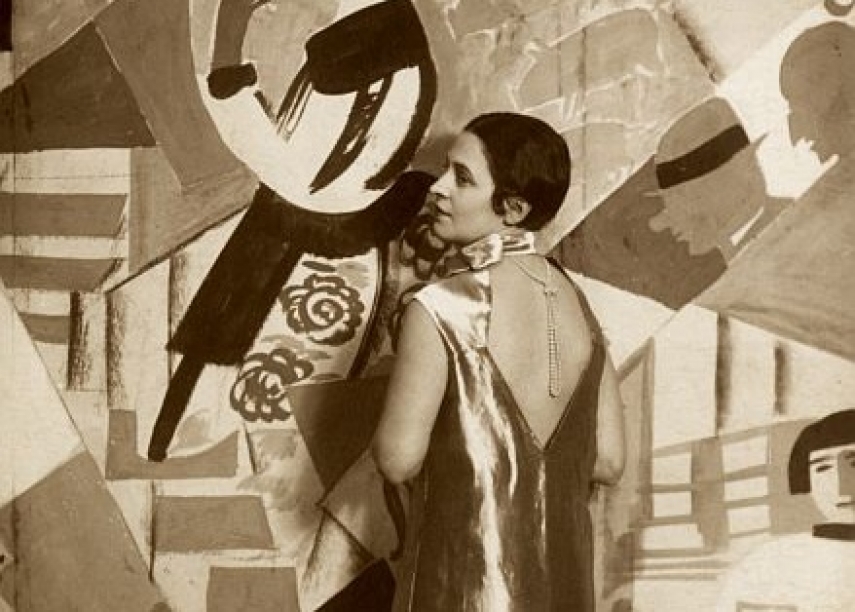 From 12 October 2019 to 12 January 2020, the Latvian National Museum of Art in Riga (Jaņa Rozentāla laukums 1) will present the exhibition Aleksandra Beļcova (1892–1981). Painting. Graphics. Porcelain of Baltars Workshop. This will be the largest retrospective of the artist’s work, offering an all-encompassing look at her diverse creative heritage.

Aleksandra Beļcova (Александра Бельцова, 1892–1981) was born in Russia, where her name is unknown beyond a narrow circle of specialists. Yet she cannot be called an émigré artist in the traditional sense of this word. Following studies at the Penza School of Art (1912–1917) she spent one academic year at SVOMAS (Free State Art Studios) in Petrograd (1918–1919) under the famous Avant-garde artist Nathan Altman. Having arrived in Riga in May 1919 to visit her future husband – artist Romans Suta (1896–1944), Beļcova quickly settled in the local culture scene, became a member of the Riga Artists’ Group and thus – a classic of Latvian modernism. Her oeuvre became an essential part of Latvian art history, and Beļcova is credited as one of the first Modernist female artists in Latvia.

In all stages of Beļcova’s career, the link with the artists of the School of Paris remained important. Both her cubist compositions of the early 1920s, as well as her works produced in the middle and later part of the decade in the style of New Objectivity corresponded to the current trends of French art of the time. A vivid episode in Beļcova’s oeuvre – her fascination with the style of the Japanese-French artist from the School of Paris, Tsuguharu Foujita (1886–1968) – the fine, calligraphic line, nuanced tonal gradations and special sheen of the white ground characteristic of his works. In the 1930s, Beļcova found inspiration in the paintings of Jules Pascin.

In 1923, 1925 and from 1927 to 1931, Aleksandra Beļcova visited Southern France. The Riviera not only helped her overcome her deadly illness – pulmonary tuberculosis, but also provided a powerful creative impulse – she made her best works there. Her landscapes of Vence particularly stand out, painted in soft tones untypical of southern nature. The stylised colour scheme of these
works can likely be explained not only with the fact that Beļcova lived there in the cold winter months, but also with her lyrical perception of nature.

Aleksandra Beļcova was not just a painter – she was also an illustrator, graphic artist and porcelain painter. During the 1920s, her graphic artworks were mostly watercolours, while in the 1930s, the author turned to pastels. Beļcova preferred portraits in which she could depict family members, friends and acquaintances.

In 1920s–1930s, she regularly published cartoons in publications such as the satirical magazine Ho-Ho (1922–1923) and the Sociāldemokrāts newspaper of the Social Democratic Party, among others. This allowed her to learn more about the people whom she was depicting, always finding the most important and characteristic elements therein. This certainly helped Beļcova in her portraits painting.

During the second half of the 1920s, Aleksandra Beļcova became an active participant in the work of the Baltars porcelain painting workshop, where Romans Suta and Sigismunds Vidbergs also worked. Beļcova often painted motifs from the folklore of various nations, geometric and abstract designs, and occasional religious motifs.

During the Soviet time, Aleksandra Beļcova increasingly turned to portrait painting. Depictions of her friends – writers, actors, opera singers and ballet dancers – enabled her to adapt to the demands of Socialist Realism with comparative ease. A large number of works from this period are compositions with interior views, often showing Beļcova’s studio, her balcony, views from the window. The depiction of interior spaces frequently included human figures. The creation of these works was not simply an exercise for the hand and the eye, the artist represented the ‘soul of the interior’. Neither are the figures in these works anonymous – even in silhouettes we can recognise Beļcova’s daughter Tatjana and granddaughter Inga.

Aleksandra Beļcova comes from a large family, yet her closest relationship was with her sister Maria, or Marusya, one year her elder. In letters to her, the artist wrote about the events in her life, sharing her joys and sorrows. The exhibition includes quotes from this correspondence. The artist’s story is complemented by fragments from two of her diaries (written in 1938 and 1939).

Aleksandra Beļcova never stopped working. Even as an elderly lady, she demonstrated lots of energy and took part in exhibitions and other aspects of the arts in Latvia.