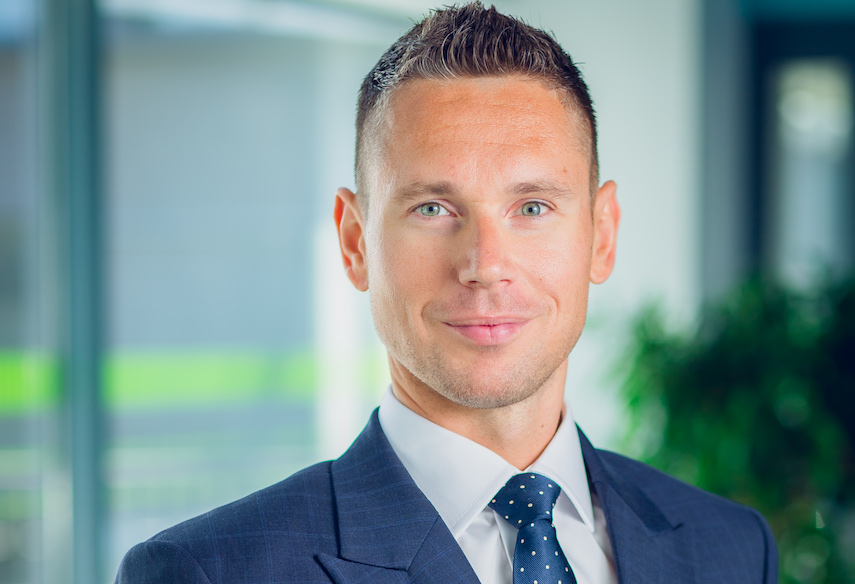 With the intensifying efforts to find a credible investor, airBaltic, the Baltics’ sole air carrier, says several potential investors from Western Europe and North America have already expressed will to put money into the company.  The new destinations commenced this year have been a success as the company continues renewing its fleet with state-of-the-art Bombardier CS300 jets. The Baltic Times sat down with Mr. Martin Sedlacky, the Chief Operations Officer at airBaltic and a Member of the Board of the company, to speak about the summer and the investor search.

How is the summer for airBaltic?

The summer is very busy for us. In fact, in terms of transported passengers, we achieve new records  this summer.  In July, airBaltic carried 393,312 passengers, or 21 per cent more, than in the same period of 2016 - it is a new record number of carried passengers for the month of July. The bookings are high, as well as the revenues, and many of the flights are full. So, no exaggeration, it’s been a pretty crazy summer.

Can you talk of the new airBaltic destinations launched earlier this year. Have all of them justified themselves?

In 2017, airBaltic launched 12 new routes. The thirteenth route to Abu Dhabi will be launched on October 29, 2017. All of them with the exception of one, Vilnius- Munich, have been better than we planned. It is something that did surprise us nicely.

Are you going to abandon the less busy route, Vilnius-Munich?

No, we do not intend to do that – there might be some adjustments in terms of the frequency though.

How has the only domestic itinerary played out, Riga- Liepaja?

It is doing quite well. It has already fulfilled our expectations that were rather moderate, as short domestic haulage is quite different from the international routes. I mean in terms of passenger numbers, marketing and possibilities. In fact, the route is doing better than we thought - the bookings are higher than we expected at the launch. The local media is very upbeat about it and the buzz works well for all.

airBaltic achieved 10 per cent passenger growth in 2016, and was set to accelerate its growth with 16 per cent additional tickets or seats on sale in 2017. How is the endeavour going?

We are not only meeting the goal, but we’re overachieving it - we’re seeing around a 20 per cent year-on-year increase. If late autumn and December do not turn out significantly worse for us, I  believe we can end the year with growth in the range of 20 per cent, which is very good.

Indeed, the market is doing well overall, and particularly so in summer. I am not in a position to speak of the results of other European airlines, but, as a rule, most of them do well in a high holiday season.

Is the passenger growth of 29 per cent airBaltic registered in Lithuanian airports over the first half year consistent with the upward trends on other airBaltic routes?

As I said, the market performance is solid, but the boost in the Lithuanian market is due to the capacity we have in the local airports, first of all Vilnius. I can just hope that moving operations from Vilnius airport to Kaunas airport, due to the reconstruction of the runway in the capital city, will not affect them, as we see some negative tendencies a result.

Are you aware if your boss, Martin Gauss, the CEO of airBaltic, struck any deals in the recent Paris Air Show exhibition, at which CS300 aircraft were showcased in the Bombardier exhibition pavilion? Such informal meetings provide great opportunities to step up the collaboration you have with the Canadian jet maker, don’t they?

No doubt, they do. As I was in the show myself, I can tell there were many parties interested in the aircraft. We feel very delighted to have the agreements with Bombardier on the jet supply for airBaltic, and we’re looking forward to further renewing our fleet with that type of aircraft.

Since you’re in charge of operations at airBaltic, maybe you can elaborate more on the performance of Bombardier aircraft, the results and the outlook?

I just can repeat what has been said many times – the type of aircraft is state-of-the art and very efficient in terms of fuel use. By 2021, airBaltic will own the youngest fleet amongst Europe’s airlines. It’s a perfect fit for airBaltic. The aircraft offer more space for passengers and crew, produce less noise and have fewer emissions from fuel burn.  The jets are easier to control than their predecessors, the maintenance intervals are very good and all data is online. The introduction of the aircraft has been very smooth, which makes us very proud.

It was reported that airlines operating Bombardier CSeries performed precautionary borescope inspections of the aircraft's Pratt & Whitney PW1500G geared turbofans earlier this year – checks that followed reports of issues with related PW1100G engines, which Bombardier has confirmed. Does it concern you?

Indeed, airBaltic CS300 is powered by Pratt & Whitney's revolutionary PurePower PW 1521G engines. airBaltic has received Pratt & Whitney information on additional checks and they will be carried out strictly in accordance with the manufacturer's specified schedule. These checks are not affecting the operation of airBaltic, especially in the most active tourist season - summer, when the airline expands its scope by offering 15 per cent more tickets and has added 12 new routes.

Honestly speaking, I was expecting a more difficult introduction of the jets, but the worries appeared to be totally unfounded.

airBaltic has been in local and international news for a while following the company’s revelation it is on the lookout for an investor. How is the endeavour going? How many potential investors have stepped forward by now?

If I am not mistaken, there are four bidders, which have reached the last, or fourth stage of the selection. The companies interested in obtaining a stake in airBaltic are west of Latvia – either in Western Europe or in North America. At the moment, we’re mostly talking of private equity and financial investors. I cannot be more specific at this point due to confidentiality agreements.

What are the key requirements that the bidders and the new investor eventually have to comply with?

There’s a discussion of the evaluation of the company and the proceeds to the State of Latvia. That’s the first key element that needs to be agreed upon. The second element is making sure that air connectivity of Riga remains high and there are many minor ones.

To sum up, all is about the ability to maximize the proceeds, finance the fleet and ensure that Riga remains a major regional air hub. Some of the things, like selling airBaltic shares, will take place on a governmental level, so the Latvian government, not us, are in the position to speak about that.

Do you have any hints from the Latvian Government whether it wants to keep the controlling stake at airBaltic, which can be crucial for the company’s future?

Nothing is ruled out in terms of a deal. As of now, there is no clearly formulated offer by the parties involved – things are on the company evaluation level. I reckon that the Latvian Government will seek to retain a majority stake depending on what the selected investor will propose. There’s one thing if he wants to get, say, a 20 per cent stake, and if he wants to get more than 50 per cent of the shares. It is possible that the investor will opt out for the latter, but we have to wait for the answers a little longer.

So, if the Latvian Government does not have the majority at the end of the day, the investor’s hands may be free to pursue substantial changes with regard to the company structure and infrastructure. Am I right?

As I said, Latvia will put safeguards through a set of agreements, ensuring that key requirements are met.  If that were the case, it would ease pressure on the Latvian Government to finance the airBaltic fleet and be responsible therefore for the company’s operations.

However, you perhaps cannot rule out the possibility that with the Latvian Government out of the game, the new investor will find ways to implement what suits its vision best?

It cannot be excluded as an impossibility, to be frank. We’ve been operating for many years now and the interference of the Latvian Government was always minimal. Of course, if there’s a new owner, he can say--Hey guys, you have to do this and that. But, if the investor is smart and has a lot of experience which we’re looking for through the selection process, he will most likely listen what the people who’ve been running the company for years, like Mr Martin Gauss (CEO of airBaltic) and other key officers in the company, have to say on one issue or another. The goal is about ensuring that the carrier continues making money. We are successfully doing it now, so a smart investor will definitely consider the results and the achievements we have by now.

Is airBaltic capable of upgrading the fleet and the Riga Airport infrastructure without an investor?

Indeed, we’re capable of doing it on our own, but the question is how you do it. There are several options, whether you use an operational lease or finance lease, or you take a bank loan and get some equity. We are able to take on each of these, as the company has credit ratings, meaning we can borrow from the private sector. Yet we believe that with a strong partner behind us, the options and possibilities would be much better -we could improve the balance sheet more significantly, and so on.

Prague, once a major Central and Eastern European air hub, has lost its status after the privatization, with many of the flights being rescheduled or cancelled. Can you be sure it won’t happen to Riga?

I was involved in the process of restructuring Czech Airlines at some point in the capacity of a consultant. It was not the privatization that led to the situation you mentioned. It was the policies and the new rules concerning state aid to the airline, which led to the situation. Hungarian Malev has dealt with a similar situation. Certainly, it is important for an airline to stay competitive in the business without state aid, but sometimes without it, it is very hard to keep an airline healthy and ensure air connectivity.

How will the summer of 2018 is likely going to look for airBaltic? Can you predict it already?

So far 2017 has been an excellent year for airBaltic – already seven brand new Bombardier CS300 aircraft have successfully joined our fleet as we are serving a growing family of customers. We are delighted to share the first glimpse of forecast how our 2018 is going to look – for the summer season of 2018 airBaltic has added Malaga (Spain), Lisbon (Portugal), Split (Croatia), Bordeaux (France) and Gdansk (Poland). Additional new destinations will be announced in the future. A complete schedule of airBaltic flights can be found on the company's homepage at www.airbaltic.com.