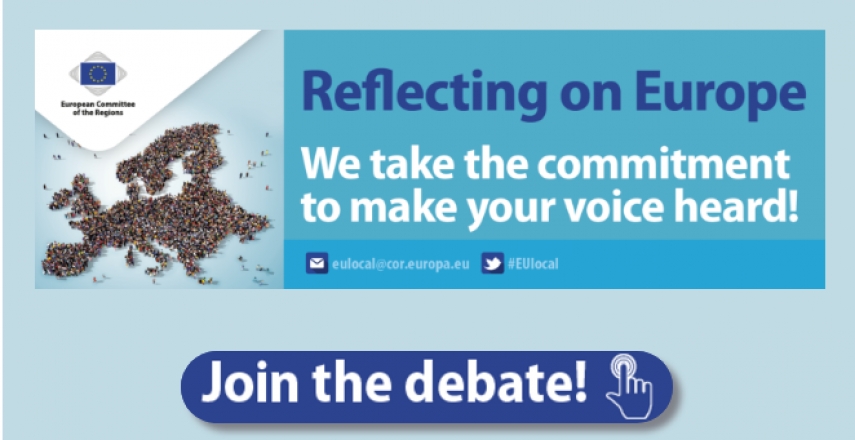 "Reflecting on Europe" is an Initiative of the European Committee of the Regions offering a space for citizens to present their concerns, thoughts, and ideas about the future of Europe.

The feedback is key to structure the CoR's contribution to the "Reflection on the EU" and provide ideas for the further EU Reform Process.  Our goal is: going local, listening and reporting back to Brussels citizens’ concerns and proposals on what the EU should be!

On this sense, the European Committee of the Regions (CoR) stands ready to support the organisation of local events across Europe in 2017, mainly in the form of "citizens' debates" upon the initiative of its Members, regions, provinces, cities and their national associations and in partnership with other EU institutions in the Member States. In addition, political debates could also be initiated by regional parliaments or local councils on the topic "Reflecting on Europe".

The conclusions of these debates or possible declarations or resolutions adopted, could feed in the CoR Opinion on "Reflecting on Europe: the voice of regional and local authorities to rebuild trust in the European Union", to be adopted in late 2017/early 2018, ahead of the launching of the campaign for the European elections of 2019.