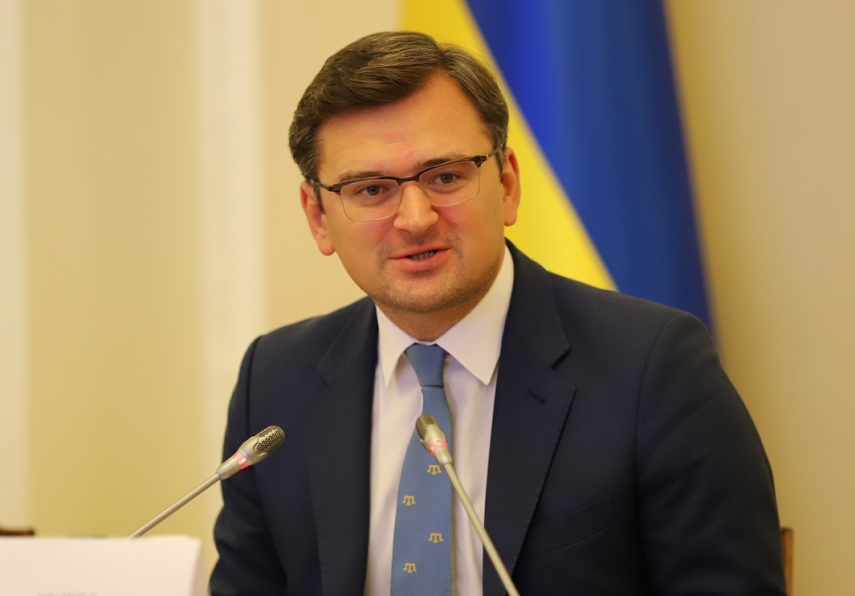 VILNIUS – The upcoming meeting of leaders from four countries on peace in Ukraine is a good sign but not a result on its own," Ukraine's Vice Prime Minister Dmytro Kuleba said in Vilnius on Friday.

He met with Lithuanian Foreign Minister Linas Linkevicius and said that Russia needs to demonstrate its willingness to withdraw troops from eastern Ukraine, bring border control back to Ukraine and ensure the Donbas region's reintegration into Ukraine for the peace process to bring about real results, he said.

"The meeting itself is a good sign, but it's not the result per se," Kuleba told journalists. "Some results may be achieved if we see clear willingness of the Russian Federation to ensure withdrawal of its forces from the occupied parts of Donbas and restore Ukraine's control over the border and ensuring full de-occupation and reintegration of the occupied parts of Donetsk and Luhansk region back to the political, legal and economic body of Ukraine."

The leaders of Ukraine, Russia, France and Germany are set to hold a meeting on peace in Ukraine on Dec 9 in Paris.

Linkevicius called against putting all responsibility for peace on Ukraine's shoulders ahead of the meeting. He also expressed hope that the talks would produce positive changes in ensuring peace.

"Progress is when something happens in reality, when there's some improvement, be it the situation at the contact line or a different attitude to that peace regulation process," the Lithuanian minister said.

"We really don't see that yet and therefore we are saying that we have hopes not only on the meeting itself but for us to see that there's some change and the security situation is improving," Linkevicius said.

The ongoing war in eastern Ukraine between Kiev's forces and Russia-backed separatists has been taking place since 2014 and has already cost over 13,000 lives.

Ahead of the meeting, discussions center on the so-called Steinmeier Formula Kiev agreed to.

Named after the German president, the Steinmeier Formula stipulates that Ukraine's eastern regions now controlled by Russia-supported separatists would get a temporary special status until local elections are held there.

If international experts conclude after the elections that they were held in compliance with democratic principles, the results would gain permanent legal power.

Kuleba says the formula is a compromise but it's in essence not related to ensuring peace in eastern Ukraine.

"It speaks only about the elections that may take place in the occupied parts of Donbas once a broader solution is found," the Ukrainian vice premier said. "It has nothing to do with anything else. It is a very focused element, a compromise, that partially paved the way to the "Normandy" meeting."

Linkevicius said that "everything that's been agreed should not take place at the expense of Ukraine's sovereignty".

Russia has also recently returned to Ukraine the three military ships it seized last year in the Kerch Strait near its occupied Crimea, but Kiev says they are in a dire state.

"Having some experience with the relation with the Russian Federation, we are not surprised with what we got," Kuleba said.

The Lithuanian minister does not consider the ship return as "a special event" as it should have been done based on international law.

24 crew members of the three Ukrainian ships were also detained during the last year's confrontation with Russia in the Kerch Strait and they were released during a prisoner swap with Ukraine in September.

The Lithuanian and Ukrainian representatives also discussed the Ukraine Reform Conference to be held in Vilnius next year. It will aim at pooling international efforts to support Kiev.

"We want to see not only the conference itself but we want to see more of content and for a certain process to take place," Linkevicius said.

In his words, the conference will aim at promoting reforms in Ukraine and implementing the EU's Association Agreement with Ukraine.

"That would be the best response for skeptics who assess the situation in Ukraine," the minister said.

The Ukrainian vice premier also said the conference would aim at ensuring a sustainable reform process in his country, and that would allow for deeper European integration.

The Ukraine Reform Conference is planned on July 6-7.