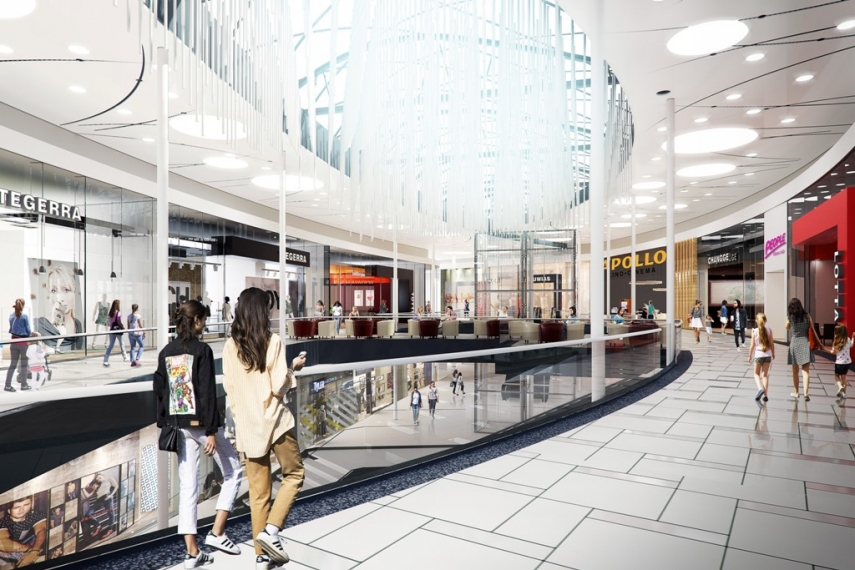 TALLINN - The expansion works will add 13,000 m2 of commercial and entertainment premises to the Ülemiste Centre. By the summer of 2019, the largest shopping and entertainment centre in Estonia, which spans a total of 92,000 m2, will include a new generation cinema, a modern sports centre, a large trampoline centre, more than 200 stores, 25 cafes and restaurants, and 1,800 parking spaces.

‘We obtained the last building permit in January, we have entered into a contract with Fund Ehitus for construction works, the Rimi hypermarket has been moved to temporary premises and now the main construction works will commence,’ said Guido Pärnits, CEO of the Ülemiste Centre. He stressed that business as usual will continue in the centre and the centre will remain open to customers. ‘The biggest change entails demolition of the current Rimi store and construction of this area into an underground car park and two overground floors. In the future, customers will be able to enter the Rimi hypermarket directly from the car park by an elevator or an escalator. Those who love practicing sports will be happy to hear that the current Sportland will be expanded by almost 1,000 m2 and there will be a modern sports club opened in the form of People Fitness. Another great change consists of replacing the current atrium in front of the Rimi store with a more modern and spacious glass dome atrium,’ described Pärnits.

The expansion works are financed by SEB Bank with whom a financing contract for EUR 115 M was entered into. EUR 30 M of the loan is for expansion of the centre and the remaining amount for refinancing of the existing loans. The total cost of the investment in the new stage of the centre will amount to approximately EUR 35 M.

According to Artjom Sokolov, head of commercial banking division of SEB, there is currently a global trend of shopping centres adjusting their business models in order to keep up with competition from the rapidly growing online shopping market. ‘Modern shopping centres are turning into leisure time venues of wider scopes, which offer the visitors more and more diverse entertainment options. SEB is delighted to finance the Ülemiste centre as one of the leading shopping centres in Estonia in their further modernising developments,’ said Sokolov.

The expansion will turn the Ülemiste Centre into a 92,000 m2 shopping and entertainment centre, placing it close to the top of the list of the largest centres in Europe. The largest lessee of the expanded section will be Apollo Cinema, which will build the most modern cinema complex in Europe in Ülemiste.

Mauri Dorbek, CEO of Apollo Group, said that the concept of Apollo Cinema, which has already received glowing feedback, will gain new solutions at the Ülemiste Centre. According to Dorbek, there will be a fully equipped theatre auditorium as well as a restaurant and cinema auditorium in the centre. ’We have also kept the possibility to hold conferences in mind. The Apollo bookstore will also present a new concept and the complex will include an O’Learys sports bar where cinema-goers can enjoy meals. All this will form a proper, comprehensive entertainment centre,’ said Dorbek.

In addition to Apollo and the People Fitness sports club, the centre will include several new restaurants and cafes, as well as some new stores. The new brands to be added include, for example, an Imaginarium ‘smart toys’ store, Pet City pet centre, Matinique men’s apparel store, Navy & Green leisurewear store and Calvin Klein Lingerie store.

‘From the perspective of shoppers, the composition of stores remains the most important factor of a good shopping centre, but opportunities for spending leisure time are becoming an increasingly decisive argument for visitors. Thus, this expansion is not so much focussed on new stores – of which there are plenty in the Ülemiste Centre and in Tallinn – but rather on entertainment and catering,’ added Guido Pärnits, CEO of Ülemiste Centre.

Ülemiste Centre is a centre of roughly 60,000 m2 of commercial premises, which includes 210 stores and spots for service-providers. The Ülemiste Centre is owned and developed by Linstow International (Norway), which manages and develops commercial properties in the Baltic states (incl. 6 shopping centres in Latvia), Norway, Portugal, Sweden and Russia. The next stage of the expansion works of the Ülemiste Centre will be completed in the first half of 2019 and will add a further 13,000 m2 of commercial and entertainment premises. In 2016, the Ülemiste Centre was awarded the title of best shopping centre in the category of expanded and renovated centres in the European Shopping Centre Awards competition. For the previous stage of expansion works, the Association of Real Estate Companies of Estonia named the Ülemiste Centre the laureate of the ‘Real Estate Deed of 2015’.