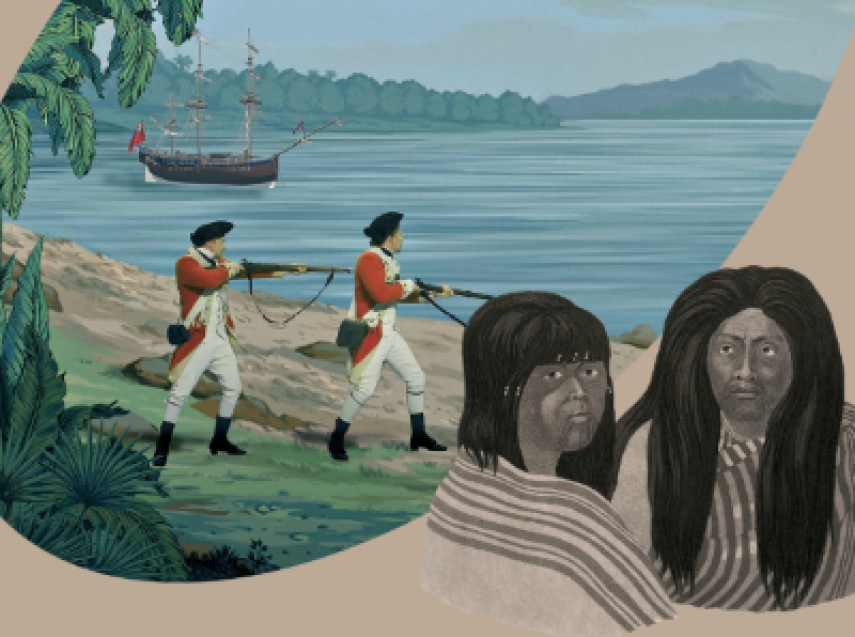 The Conqueror's Eye will open at the Kumu Art Museum on Wednesday, 18 September at 6 pm. At its centre is a powerful video called In Pursuit of Venus [infected] by Lisa Reihana, an artist from New Zealand. The video challenges the stereotypical ways that one’s own people and others, Europeans and indigenous peoples, are depicted and have become fixed in the history of visual culture.

Lisa Reihana’s In Pursuit of Venus [infected] is a cinematic staging of a French decorative wallpaper called Les Sauvages de la Mer Pacifique (Native Peoples of the South Pacific) (1804–1805), which depicts the legendary Captain James Cook’s expeditions of discovery and conquest to Australia and New Zealand in the late 18th century. In her work, Reihana examines the legacy of global exploration from the perspective of indigenous peoples. With the help of digital technology, the artist has animated the two-hundred-year-old decorative wallpaper in order to revive the real and imaginary meetings between the inhabitants of countries of the Pacific and Europeans.

The work represented New Zealand at the 2017 Venice Biennale. “Lisa Reihana’s video was one of the most impactful works at the biennale. The work was instantly intriguing and prompted me to search for comparative features in 19th-century pictorial material from Estonia, as well as for information about how the Baltic Germans mapped the world, and how they saw Estonians,” said Kadi Polli, the Director of the Kumu Art Museum.

In addition to Reihana’s work, the exhibition also examines the broad dissemination and impact of colonialist stereotypes in the Baltic countries. This features the abundant pictorial legacy from colonies and exploratory expeditions that can be found in Estonian museums and libraries, illustrations from circumnavigations of the globe made by Baltic-German explorers, and visual images of the peoples of the Russian Empire, including Estonians. The material, much of which has been forgotten, clearly shows that colonial themes were not alien or removed from the Baltic countries, but strongly impacted how the world viewed local residents.

Bringing the technically extremely ambitious and poetically enchanting work of video art to Estonia is a significant step that can prompt a new look at the pictures of the peasantry and northern people created by the Baltic Germans and artists of the Russian Empire. In Pursuit of Venus [infected] has been exhibited at colonialism-themed exhibitions around the world, including at the Royal Academy of Arts in London, and the de Young Museum in San Francisco.

At 5 pm, before the exhibition opening, an English-language artist talk will take place with Lisa Reihana. The conversation will be moderated by the historian Linda Kaljundi.

Lisa Reihana (1964) is an internationally recognised artist from New Zealand. She experiments with various media, including digital video, film, sound, photography, spatial design, performance, body decoration and sculpture. Read more about the artist and her work In Pursuit of Venus [infected] on the project website here.