The first two construction phases of Pro Kapital's large-scale project, Kalaranna Quarter, will be carried out by Nordecon 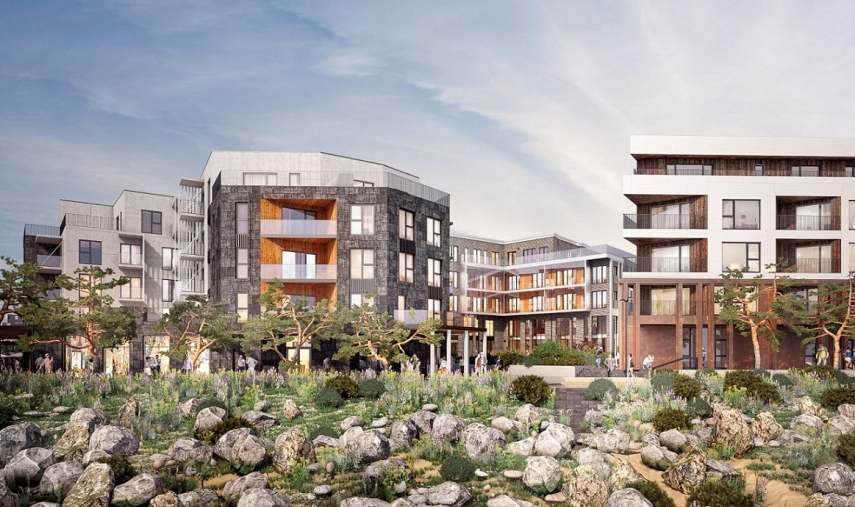 Nordecon AS and OÜ Kalaranna Kvartal, a subsidiary of AS Pro Kapital Grupp, have signed an agreement for the design and construction of the first two phases of Kalaranna Quarter. The property of Kalaranna Street 8 in Tallinn will have eight new buildings with 240 apartments, commercial premises and underground parking. An integral part of the residential quarter is well-thought-out landscape architecture and a beach promenade that largely preserves the existing natural environment. The design and construction works will be carried out in smaller stages and it is planned to start as soon as possible. The completion of the project is currently scheduled for the end of 2021. The value of the contract is EUR 40.5 million plus VAT. The project is confirmed to be financed by the domestic LHV Pank.

“Thanks to its location near the Old Town, rich history and close proximity to the sea, Kalaranna Quarter is undoubtedly one of the most unique areas in Tallinn. It is a truly well considered and carefully thought-out living environment that is both comfortable and appealing to its residents and visitors alike,” said Paolo Michelozzi, the CEO of AS Pro Kapital Grupp. According to him, it is an integral environment, where modern metropolitan architecture, thoughtful user experience through quality and aesthetics and a public urban space meet. “The main idea of Kalaranna Quarter is of a safe, functional and modern living environment, which, while emphasizing the region's specific characteristics, is creating a whole new user culture and a world of values,” emphasized Michelozzi.

“A project like the Kalaranna residential area, gives the construction company the opportunity to prove itself professionally. Construction works with such proximity to the sea and coastal area sets very high demands on engineering solutions. The Kalaranna area is truly special for locals and tourists alike, thus for the construction company a project like Kalaranna Quarter also means great responsibility creating a high quality urban space,” said Gerd Müller, the Chairman of the Management Board of Nordecon AS. "Landscaping around residential buildings values the views of the sea and surrounding landmarks such as Linnahall, Patarei, Kultuurikatel and Oleviste Church," added Müller.

Landscape design of Kalaranna Quarter aims to create a multi-layered urban structure which works as part of Tallinn, connects the city to the sea, both visually and logistically, enriches the city as a whole, and emphasizes the region's uniqueness. The area will include the Kalaranna Park, which offers a variety of leisure activities such as outdoor events, skating rinks and playgrounds being a part of an open city space. There will be underground parking, which ensures carefree and convenient environment for pedestrians and drivers alike. The planned beach promenade starts at Kalaranna Street, adjacent to the Kalasadam and continues towards Lennusadam. The natural sandy shoreline will be preserved.

The architects of Kalaranna Quarter are Mihkel Tüür and Ott Kadarik together with the team of architects from Kadarik Tüür Arhitektid. Kalaranna Quarter with its total area of nearly 39,000 m2 will be built in three phases. A total of twelve buildings will have a total gross area of approximately 38,300 m2. The buildings will be adjacent to Linnahall and Kalaranna parks and are planned to have four to five storeys. Facade finishing will have different shades and structures: natural stone, wood, aluminium composite board and brick. According to the detailed plan, a single-storey, 20,000 m2 underground car park with approximately 450 parking spaces is planned for the property. By the end of the first two phases of construction the land area of approximately 31,500 m2 will be developed - eight buildings with a gross surface area of approximately 25,600 m2 and 2/3 of the underground car park with approximately 370 parking spaces.

AS Pro Kapital Grupp (www.prokapital.com) is one of the leading real estate developers in Estonia, working on large-scale commercial and residential real estate projects in Estonia, Latvia and Lithuania. Since its establishment in 1994, the company has completed more than 20 development projects with the total sales area above 250,000 square meters. At the end of 2018 Pro Kapital employed 89 people in Estonia, Latvia, Lithuania and Germany. The shares of AS Pro Kapital Grupp are listed on the main list of the Nasdaq Tallinn Stock Exchange.

Nordecon AS (www.nordecon.com) is a group of companies focused on project management and general contracting for building and civil engineering. Geographically, the Group operates in Estonia, Ukraine, Finland and Sweden. The parent company of the Group, Nordecon AS, is registered and located in Tallinn, Estonia. The Group's consolidated revenue for 2017 was 231 million euros. The Nordecon Group currently employs around 700 people. As of May 18, 2006, the shares of the parent company are quoted on the main list of the NASDAQ Tallinn Stock Exchange.