The Art Museum of Estonia will open an exhibition of Kaljo Põllu’s oeuvre in Japan. 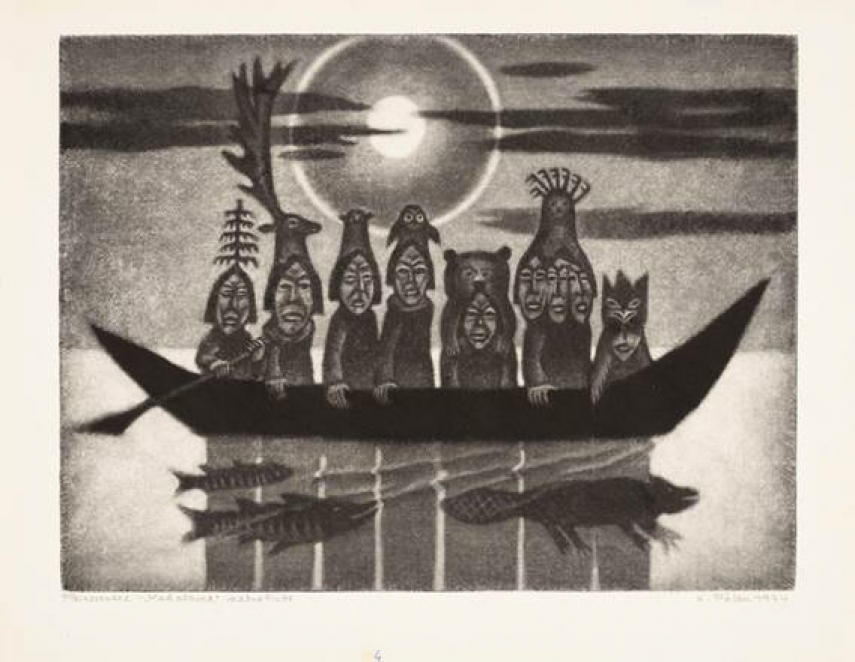 On Thursday, 15 November, an exhibition of graphic art by the Estonian artist Kaljo Põllu opened in the Okuni Shrine in Japan, as part of the international programme to celebrate the 100th anniversary of the Estonian Republic. The fascinating display arranged jointly by the Art Museum of Estonia, the Okuni Shrine, the city of Saku and the Saku Municipal Museum of Modern Art in Japan gives an extraordinarily revealing glimpse of the ancient world of the Estonians’ ancestors, as well as of Estonian legends, beliefs and relations with nature.

Kaljo Põllu (1934–2010) was one of the most outstanding Estonian artists, and in his works of impressive visual language he deeply reflected the beliefs and ancient myths of Finno-Ugric and Nordic peoples. As an art lecturer and a leader of scientific expeditions to investigate Estonian and Finno-Ugric national heritage, he deeply influenced the Estonian art scene. Using the suggestive mezzotint technique, the artist, with his strong characteristic style, created voluminous series of graphic sheets: Ancient Dwellers, Kali People, Heaven and Earth, Estonian Landscapes and Enlightenment. A selection of works from these series forms the central part of the exhibition arranged in Japan. In his works, Kaljo Põllu told stories about his ancestors’ beliefs and legends, relations between gods and people, the creation of the world, mythical totem animals and natural powers. Traits similar to Estonian mythology and relations with nature, which formed the basis of inspiration for Kaljo Põllu, are also revealed in old Japanese beliefs.
At the opening of the exhibition in the Okuni Shrine, Kuniko Katȏ, a Japanese musician of international recognition performed. Kuniko Katȏ has worked with the Estonian composer Arvo Pärt and was the first to create arrangements for percussion instruments of several of Pärt’s well-known works. Arvo Pärt’s “Cantus in Memoriam Benjamin Britten” and “Spiegel im Spiegel” will be performed at the concert, as well as Peep Sarapik’s “He Flies Towards the Beehive”.

The exhibition is accompanied by a richly illustrated catalogue in Japanese and in English.

Kaljo Põllu’s exhibition in Japan is part of the international programme to celebrate the 100th anniversary of the Estonian Republic. A series of foreign exhibitions of the Art Museum of Estonia started in 2017, together with the Estonian presidency of the Council of the European Union. Within the framework of the project of foreign exhibitions, the Art Museum of Estonia and the Estonian official government programme Eesti Vabariik 100 together arranged an exhibition of Estonian contemporary art, Archaeology of the Screen, in the Bozar Art Centre in Brussels, and the exhibition Konrad Mägi in the Galleria Nazionale d’Arte Moderna e Contemporanea in Rome. At the beginning of 2018, a large-scale exhibition, Michel Sittow. Estonian Painter at the Courts of Renaissance Europe, was arranged in the National Gallery of Art in Washington and later in the Kumu Art Museum in Estonia. From April to July, an exhibition of the art of the three Baltic states, Wild Souls. Symbolism in the Art of the Baltic States, was held in the Orsay Museum in Paris. In October, in cooperation with the Le Lieu Unique art centre, an exhibition of contemporary art, Ascending from the Liquid Horizon,opened in Nantes, France. Beginning on 22 November, the exposition Border Poetics. Estonian Art 1918–2018 can be seen in the Tretyakov Gallery in Moscow.

The exhibition of Kaljo Põllu’s oeuvre in the Okuni Shrine in Japan is open from 15 November 2018 to 17 February 2019. The same exhibition will be held in the Saku Municipal Museum of Modern Art from 8 March 2019 to 14 April 2019.

The Okuni Shrine, which was founded in the 6th century, is considered one of the pillars of the Japanese national identity. The shrine plays an important role in preserving national heritage, including traditional art, several classical performance arts and unique rituals. Cooperation between the city of Saku in Nagano Prefecture in Japan and the Estonian town of Saku has lasted for more than ten years. A highly active Japanese-Estonian friendship society exists in the city of Saku in Nagano and the interest in Estonian culture is deep.