SAINT CASIMIR‘S FAIR 2018: A hundred meter long table, gifts to Vilnius and the vision of the future fair 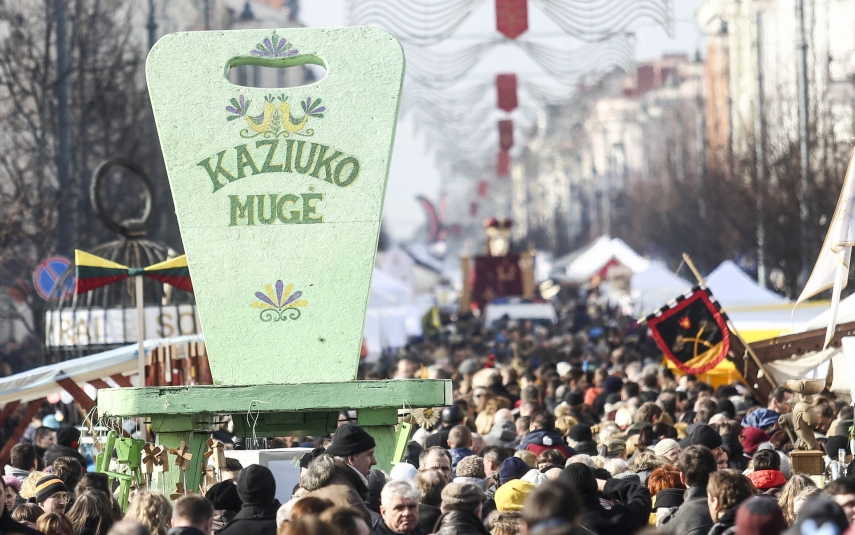 This year is the 415th Saint Casimir‘s Fair which going to surprise residents of Vilnius and city visitors with ingenious products, special events and culinary discoveries. On March 2-4, more than 2000 Casimir‘s Fair traders in the streets of Vilnius Old Town will flood with verbs, carvings, tasty ring-shaped rolls and other national heritage products of the country. According to Vytenis Urbas, the organizer of the Fair, Casimir‘s Fair is not just a shopping mall: „There will be not only things to buy, but also where to look around! Not without a reason we call this fair as Centennial  Fair. There will be a lot of events to mention this occasion“, V. Urba said.

Lithuanian Centennial table and records at the Town Hall Square

On March 3-4, at Vilnius City Hall Square will spread a hundred-meter-long table, where all the guests of the fair will be invited to sit and taste the festive dishes. The Centennial table will become one of the main attractions and accent of the Fair this year, meeting place. The Centennial menu will consist of Lithuanian products. „Thanks to the partners of the project, it will be possible to taste the festival dinner for a symbolic price, and the masters of the Lithuanian Barbecue Bakery Association will take care by a good taste, who will prepare and serve the meat directly from a 100 meters long grill“, V. Urba said.

In the bustling city square there will be captured even a few, very delicious records: Raseiniai District Administration will produce the largest sweet verb in Lithuania, which will be decorated with multicolored gingerbread. One more record, where each of the participants of the Fair will be able to contribute on Saturday is the largest, three-colored composition made up of biscuits. Guests will be able to stick thousands of healthy cookies on a specially built structure at the Casimir‘s Fair.

Contribution to unconventional art and fashion

At the Lukiškės square, „Steel Beavers Chainsaw Carving Club“ will present a little familiar art form – they will carve various shapes using the gasoline saw and they will create owls, eagles and other amazing sculptures at the square. During all three days of the Fair, there will be a fast-paced match: the wooden deck will get an artwork faster than one hour. After competition, all artworks will be sold at auctions held during the fair.

Not only carvers, but also designers will show their skills - at the Cathedral Square, fashion enthusiasts will invite the Design Avenue, where even 120 young, viable Lithuanian designers will gather together.

At the Cathedral Square - from games to social business ideas

The Cathedral Square of Vilnius will become a place where traditionally will gather “Children and Youth Casimir”. It is a place where there are a lot of games and entertainments. While the youngest participants of the Fair will be involved in games and entertainments, the older people will be invited to get the knowledge about social business idea. “Business Lithuania”, together with the partners, will represent over twenty examples of social business that address the country's social problems and seek a positive impact through social innovation at the Cathedral Square in the Social Business Trade Arc.

Next Year – the year of future Casimir

According to the organizers, the robot NAO of the „Robotics Academy“, which figured at the Casimir‘s Fair advertising campaign, is a symbol of this Casimir‘s Fair not by accident. According to them, this is the introduction to the next year, when together with the „Robotics Academy“ it is planned to establish a future zone of the Casimir‘s Fair, where traditions will be transmitted to the newly-enthused robots - sellers, will be invited to purchase 3D printed verbs and resurgent wooden spoons.

Casimir‘s Fair was first prepared in 1604.

Traders of Vilnius city got the privilege to prepare of Saint Casimir‘s Hall of Fame in 1827.

The total length of this year's Casimir‘s Fair is 17 kilometers;

More than 300 certified national heritage masters will present their items;

More than 100 traders will trade in handcrafted verbs.