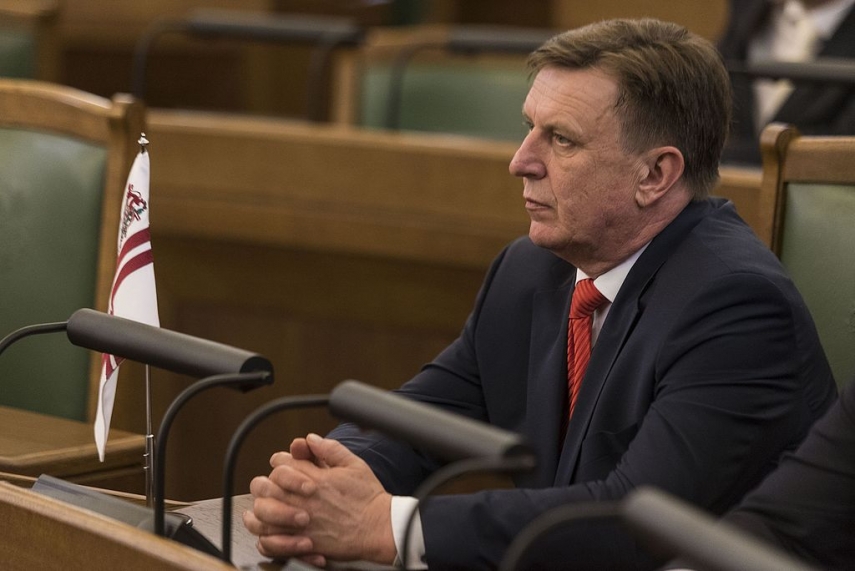 RIGA - Prime Minister Maris Kucinskis (Greens/Farmers) has full trust in the Corruption Prevention Bureau (KNAB) and the Prosecutor General’s Office which says that there are grounds for launching a corruption probe against Bank of Latvia Governor Ilmars Rimsevics and that the case will be investigated and sent to court.

I have trust in Latvian law enforcement agencies, the premier said in an interview with LNT commercial TV channel this morning. “The stakes in this case are very high,” he added.

Kucinskis repeatedly asked to distinguish between several mutually unrelated processes currently going on in Latvia, indicating that the allegations of graft KNAB has made against Rimsevics have nothing to do with the commercial banks operating in Latvia, which means that this process is unrelated to the report of the Financial Crimes Enforcement Network (FinCEN) of the U.S. Department of the Treasury implicating Latvia’s ABLV Bank in bribery and violations of anti-money laundering rules.

Sadly, there have been attempts to link these two cases together without any sufficient reason, Kucinskis said, pointing to Norvik Banka’s key owner Grigory Guselnikov who in recent days has been making shocking allegations against Rimsevics and Latvia. The prime minister noted that so far, no evidence has been provided to the Latvian law enforcement authorities to substantiate FinCEN’s bribery allegations or Guselnikov’s claims.

Kucinskis believes that Guselnikov seized the opportunity to slander Latvia amid his legal dispute with Latvia over EUR 200 million, but on the other hand, in a law-governed state there cannot be the right or wrong time to make an arrest or probe a case.

Commenting on Rimsevics’ work perspectives at the Bank of Latvia, Kucinskis said that KNAB has banned Rimsevics from heading the central bank and this ban has to be respected, otherwise KNAB can impose an even tougher restriction.

Kucinskis does not think that it is necessary to urgently pass legislative amendments that would allow dismissing Rimsevics as Bank of Latvia governor.

Kucinskis does not expect the current crisis in the banking sector to lead to a crisis in his government, but he realizes that the opposition might take advantage of the situation.

KNAB is probing Rimsevics for soliciting and accepting a huge bribe, worth at least EUR 100,000, but the head of the central bank said he was determined to stay in office.

KNAB said the criminal case opened on February 15 was not related to any of the credit institutions currently operating in Latvia - neither ABLV Bank accused of involvement in money laundering and corruption by the Financial Crimes Enforcement Network (FinCEN) of the U.S. Department of Treasury nor Norvik Banka and its potential litigation with the Latvian state.