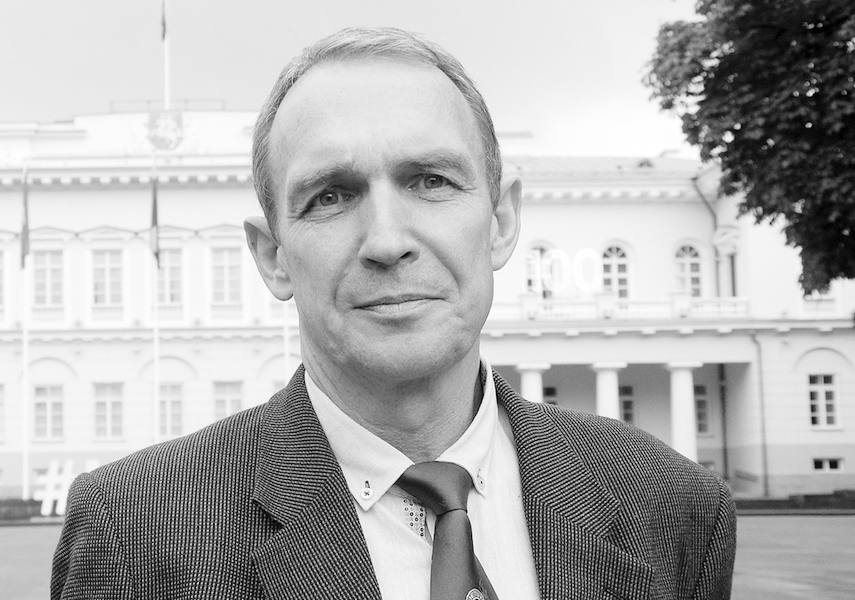 The line-up of Lithuania’s presidential candidates in the 2019 election is far from being clear so far, yet one figure, Arvydas Juozaitis, stands out.  A prolific public activist, philosopher, writer, also one of the godfathers of the late 1980s Sajudis, the national movement that led to the proclamation of Lithuania’s independence on 11 March, 1990.  Also a distinguished sportsman, Mr Juozaitis was a Bronze Medal winner in swimming at the Montreal Olympics in 1976.  He kindly agreed to answer some questions for The Baltic Times.

The Baltics, and Lithuania, are engulfed in the jubilations of centennial events. Have we really become such great patriots over the years as we appear to be this year?

Lithuanian patriotism was the crucial creative force for Lithuanian independence over more than 100 years. Without that force we would not have become a state, a fully sovereign state. Therefore, patriotism is an essential force in the jubilations of the Centenary.

What are your biggest disappointments and happiest discoveries from Lithuania’s 28-years-plus-something course of independence?

The happiest discoveries? The constant joyful feeling of freedom, and at the same time, the happiness that we are a political, not only a cultural nation. And the disappointments? The only one — Lithuanians in exodus from the Motherland, I mean emigration. Nobody had expected the scope of disaster, which emigration is.

What do you believe are three biggest threats to the statehood of Lithuania besides high emigration? How to tackle them?

Three? I see more of them. Yet you are right: there are three blocks of threats. The first comes from the weakness of Europe. What does it mean? The culture of the West falls into a deep crisis of human creativity, one full of moral negation. The second block of threats is of a political nature, namely the false striving to integrate European nations into more fields than they have already been integrated i.e., Euro-Federalization without the consent of the nations. The third block stems from the so-called Russian problem and the need to protect East Europe, all of Europe, as a matter of fact.

Lithuania tends to scratch out the Communist past entirely. Do we not over-exert ourselves in this striving? Do you support the latest initiative to name the Lithuanian Communist Party as a criminal organization?

There is no need to “fight” the Soviet legacy as it has been done enough in rooting it out. Obviously, the aforementioned initiative is an over-exert striving, a counter-productive proposal.

What do you believe Lithuania ought to learn from Poland and Hungary, both governed by far rightist-parties? Is nationalism only bad?

Poland and Hungary have their own internal causes, which determined nationalism as the necessary power. Nationalism is based on the very notion of a national state. That is natural. In Eastern Europe we do not affiliate nationalism with ‘’badness“. Let’s remember that our kind of nationalism crushed Communism.

The European Union is a unit that already has its own tradition. In the Baltics we have an almost grown-up generation, which can not imagine life without the EU. But at the same time, the Baltic states should strive for their own identity and sovereignty, consequently, to join the Visegrad group of nations in this respect. I believe that the European Union will survive only as a true Union of Homelands.

You’re a renowned public activist, a philosopher, a writer, and also one of the Godfathers of the late 1980s Sajudis, the national movement that led to the proclamation of Lithuania’s independence on 11 March 1990.  You are also a distinguished sportsman, a Bronze Medal winner in swimming at the Montreal Olympics in 1976. Who do you attribute all of these talents to?

What can a person say about his own life? Accomplishments alone should speak for it, I reckon. The achievements you’ve just listed are not most essential to me. The ‘’modus vivendi“ of my life stems from writing.  Why did I not become a professional writer, a man of ‘’belle literature“ then? Because there were a lot of another kinds of activities that overshadowed the real essence of my character.  My friends say: “Writer? Wouldn’t it be too rich of you?!“  I’ve written more than 20 plays (nine of them were staged), a novel, short stories, countless essays.  The plays “Queen Louise”, staged in the Klaipeda Drama Theatre (it is about the destiny of a Prussian King’s family in 1807, i.e., during the Napoleon époque) and “The Heart in Vilnius“ staged in the Vilnius Youth theatre (this one is on Pilsudsky and Dzerjinsky) are especially worth mentioning in the political context.

You’ve announced your participation in the presidential election next year. Do you really believe you can win it? You will certainly need support from a major political party, which you don’t have yet...

Just one remark: there has been no official announcement on the start of my participation in the presidential election. This may happen in mid-September. You doubt my possibilities in the race? Well, I did not know how to win a medal in the Olympic swimming pool in Montreal in 1976, yet I won it. With regard to the support of the parties, I can say calmly and clearly: not the biggest parties determine the outcome of presidential elections in Lithuania. Never has it ever been that way! The people decide.

Let’s say, you win the election. What kind of a president would Arvydas Juozaitis be? What reforms would you spearhead?

The winner of an election, and the 2019 presidential election, too, is supposed to give hope. I’d say sow it for all of the citizens of the country, as a matter of fact. The countryman’s faith in the future is key. Specifically, the entire system of justice should be renewed.  The political calendar is favourable, as in a year and a half after the presidential election we will have a new Seimas (Lithuanian Parliament) election.

What is your opinion regarding the incumbent Lithuanian President, Dalia Grybauskaite? Does she stand up to her moniker as the “Steel Magnolia”?

The presidential service to the country deserves a serious assessment. It cannot be done by taking into account only political considerations - we need a deeper historical approach. Moreover, I have no need to appreciate the activities of such a person in accordance with any metaphoric definitions.

Can you give us a glimpse into your values and morals? Are you a devoted Christian as someone portrayed you?

You need some kind of evidences? I usually go to the Catholic Church every second Sunday. The life of my family is based on Christian teachings and morals. Our two children - one is 10 and the other is 3 – are being raised in an environment of Christian morals and also within Lithuanian traditions. The greatest influence on my world view has been made by Father and Monk Stanislovas Dobrovolskis (I’ve written a book on the life of S. Dobrovolskis and created a movie about him), Monsignor Kazimieras Vasiliauskas,  as well as the luminous figure of our culture, Juozas Tumas Vaizgantas.

What is your take on the trendy social issues such as the empowerment of women, equal rights, and the discussion on social, gender and gay rights?

Obviously, these are very trendy, fashionable questions, and so the answers I have are no less fashionable. Women’s rights are constantly expanding. They have achieved a lot over the last 100 years, and they will continue to expand.  I do not think that this expansion may be of an infinite character, because it will overcome woman’s nature. The bouquet of all the other rights marks the development of the Western civilisation, which is becoming more and more questionable. Not only does Islam not accept this bouquet, but — and that is the more essential point for us — John Paul II called it the “death knell of the West“.  The fear and duality of many Western politicians, and even of many of the institutions, arises from the fact that, although officially accepting a Pope as the moral authority, they, however, openly deny Christianity and the Pope as a moral ideal.

Where do you see Lithuania in another hundred years?

What I want and what I will strive for is one essential thing, and that is, that for at least 50 years Lithuania will remain on the political map of Europe as a sovereign state, and as one that will prosper and which will provide an enormous input to the cultural treasury of all of humanity.