Power of thought: How the worldview of Ukrainians and Balts changed right after the beginning of the war 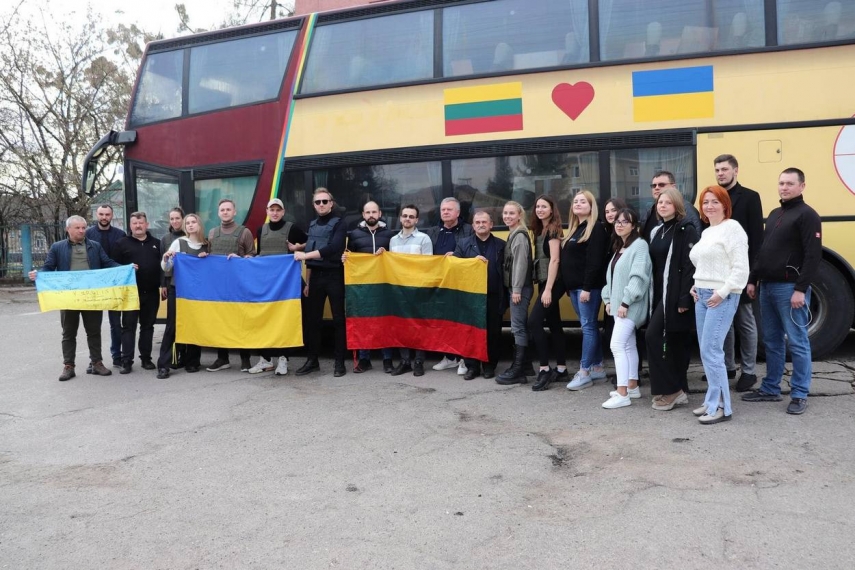 Destroyed cities, damaged destinies, and millions of people that lost their homes – it has been more than two months (the article was written for The Baltic Times Magazine in the beginning of May -TBT) since the start of the Russian military offense in Ukraine. However, according to media and terrorism researcher Ihor Myslovskiy, the physical war that we are witnessing has followed hundreds of years of the information war between Ukraine and Russia, a war with weapons much stronger than guns and tanks, where Russia has recently been losing dramatically.

“I suggest that the current full-scale Russian invasion in Ukraine can be directly linked to the information war losses on the Russian side. Information warfare is a strategic contest for consciousness. When you establish a monopoly on the worldview, you can easily program behaviors and influence decisions. The main task of information warfare is not to force a person to do something, but to form the necessary cognitive background so that they act or think independently, in line with what the enemy needs,” Myslovskiy, who has been researching this topic for the last few years at the Institute of Journalism of Taras Shevchenko National University in Kyiv, told The Baltic Times Magazine.

For the last eight years, Kremlin was losing its influence in Ukraine dramatically. Since the start of the hybrid war in the Eastern regions in 2014, Ukraine has banned more than a hundred pro-Russian media channels due to their repeated breaches of Ukrainian legislation. in 2021, the Ukrainian Constitutional Court has approved the Law of Ukraine "On Ensuring the Functioning of the Ukrainian Language as the State Language" as a part of the Constitution, establishing the dominant role of the Ukrainian language.

“The more Ukraine moves away from everything soviet and Russian, the harder it is to manipulate the cultural landscape and the consciousness of the masses. Physical aggression becomes the only way to restore this control. In the information war, Putin bets on fear. He seeks to instill in the Ukrainian people such fear that in a panic we demand that the authorities make any hostile concessions. Because when a paralyzing fear grips, you are ready to do anything to stop it.”

Daria Holubova arrived in Lithuania in March. Originally from Schastia, a town in Eastern Ukraine now occupied by the Russian army, she had to search for a new home twice: once in 2019, after five years of Russian aggression and hybrid war in the Eastern Ukraine, and the second time at the beginning of March this year.

“I left Kyiv after one week after the war started. This entire week was very scary, I could hardly sleep, I could hear the explosions, and sirens, I also spent some nights in the basement. During one of the nights, the remains of the Russian military hardware hit by Ukrainian air defense destroyed a house in our neighborhood. I remember how I woke up from those terrifying sounds. Together with my brother’s wife, her mother, and my two cats, we left the city soon after that.”

The town of Schastia, where Holubova’s parents are, became one of the first military targets of Russian troops on the 24th of February.

“People hid in their basements, and a lot of residential buildings were hit. The people of Schastia did not have electricity, gas, heating, mobile communications, and the Internet. It was very scary to think that our small town was being bombed, and not be able to contact my family. But my parents are alive and now there is already a connection with them, even though this territory is fully occupied by the Russian military.”

Karine Sergian-Ignotiene, a clinical psychologist working with Ukrainian refugees, comments that there are three main psychological mechanisms that can be activated during times of unprecedented stress: denial, active participation, and interpersonal sensitivity. Denial and active participation are both results of coping mechanisms that trigger a different immediate response.

“While some people find all the information about the war, war crimes, refugees, and victims so stressful, that it is easier to pretend that nothing is happening, others find it easier to cope by actively doing anything they can to help to reach a goal they would feel good about, or that would reflect their values and beliefs, which in this situation would be peace and saving Ukrainian lives,”  says Sergian-Ignotiene.

The third coping mechanism, interpersonal sensitivity, can be defined as an excessive and very deep feeling of sensitivity towards emotions, behaviors, and traumatic life events of others. Research suggests that people experiencing interpersonal sensitivity usually had to go through traumatic events in their lives, such as childhood trauma, any kind of long-lasting abuse, or life-threatening situations and events. Sergian-Ignotiene suggests that this is the reason why the older population in the Baltics is more sensitive towards what is happening in Ukraine, experiencing anxiety, shock, and depression, as well as sleep deprivation and other signs of mental health decline, as many of them remember Russian oppression from their past, before the proclamation of independence of the Baltic states.

Denial, active participation, and interpersonal activity can be triggered already directly at war, even though when exposed directly to life-threatening situations, core mechanisms of “fight or flight” often take over to ensure survival. They can also get activated in physical safety, while observing the situation from afar, during information war, and even while working with people who faced war directly.

“It is hard to guess the impact of these psychological mechanisms on physical health, however, it is already clear that anxiety and depression levels are increasing significantly, also there are tendencies of psychosomatic and stress-related health problems, sleep disorders in a large number of the general population. Most people seek out help, yet some understand very well what caused these health issues and choose to ignore or wait out in the belief that everything will be back to how it was before the war, once this war is over,” adds Sergian-Ignotiene.

Sergian-Ignotiene also notes that there are very alarming tendencies of peaked anxiety, depression, feeling of constant fear, and perpetual traumatic event recollection amongst Ukrainian refugees. “Even when people turn up for a health check, you can see that their current state is not their true self, but rather a result of traumatic events caused by this war. Judging by these trends, as sad as it is, I would dare to assume that the majority of refugees, as well as people who will stay in Ukraine and wait out the war, will develop average to severe PTSD, and it will take a significant amount of time, help, and resources to overcome.”

To minimize the negative psychological effects of the war events, Sergian-Ignotiene recommends paying close attention to one’s mental health, limiting the amounts of information consumption, especially before going to bed and right after waking up, and in case of dealing with the refugees from Ukraine, being attentive, listen to their experiences with empathy, and helping to direct them to mental health professionals.

Ieva Muliuole, together with other volunteers from the Baltics, went to Ukraine multiple times in the last months to deliver food, clothes, hygiene supplies, medicine for the locals as well as tactical vests, tourniquets, and other supplies for the army, as part of activities organized by Karolis Sankauskas, CEO at “Projektavimo Sprendimai”.

“We have traveled to many cities in the last months. There is a large center in Mykolaiv, where we have delivered a lot of supplies collected in Lithuania. There I met local volunteers and people who had just become refugees. Volunteers greeted us with their hearts open, they were very grateful for the donations made by Lithuanians and called us sisters and brothers. The ones who fled their cities were lost, unable to comprehend what just happened and how or where are they going to live next week. They don’t want to leave Ukraine, but they also cannot come back to their cities for now,” tells Muliole.

Daria Holubova, who lives in Lithuanian Klaipeda already for a month, also recalls the support she and her closest ones received after crossing the Ukrainian border.

“Everyone is always ready to help. There was even a case when I was standing next to a supermarket, and a stranger, a guy of my age, wanted to get to know me. When he found out that I was from Ukraine, he hugged me and wanted to buy me food! It is beyond words how nice it is to see such support. We received food, humanitarian help, and simply emotional support. Many Ukrainians have relatives in Russia, and those relatives don’t believe when they tell them about what is happening in our cities, but Europeans, even without any family bonds, understand us, want to help, and deeply care about us!”

One week after arrival, Holubova also found a freelance job in her domain of interior design and 3D visualization.

According to Myslovskiy, the Western world has successfully begun to destroy Russian narratives in their own information spaces. Myslovskiy notes that these days Russia is not about Dostoevsky, the Hermitage, or the ballet, it is about the genocide in Bucha, the rocket attacks on the maternity hospital in Mariupol, and the brutal looting in the Kyiv region.

“Russia instantly turned from a civilized European into a barbarian, and this image is truer,” says Myslovskiy, “the mythological image of cultural Russia has begun to dissolve abroad, and this shows that the Kremlin is losing in the information war in the West as well.

The Baltic states were the first ones in the EU to provide weapons and supplies to Ukraine, but also clean up their information space from aggressive Russian propaganda.

“The destruction of symbols is especially important in the information war. And here the Baltic states sided with Ukraine. Renaming the streets near Russian embassies is a great practice. For me personally, one of the main news in the context of the information war was the decision of the Latvian Seimas to declare May 9, 2022, the Day of Remembrance of the victims of the Russian aggression against Ukraine. This is not just a manifestation of solidarity with Ukraine, it is a destruction of the greatest Russian symbol serving as the base to all current propaganda. Given the Kremlin's attitude to the holiday, it is a symbolic display of total disrespect and almost humiliation that the aggressor deserves. The Seimas has made it clear that there is no victory for Russia in Latvia. There will be no parades or fireworks on this day. Russia is now associated exclusively with killings. That is how Western countries must act in the information war against the Kremlin. This Latvian case is exemplary for me,” shares Ihor Myslovskyi.