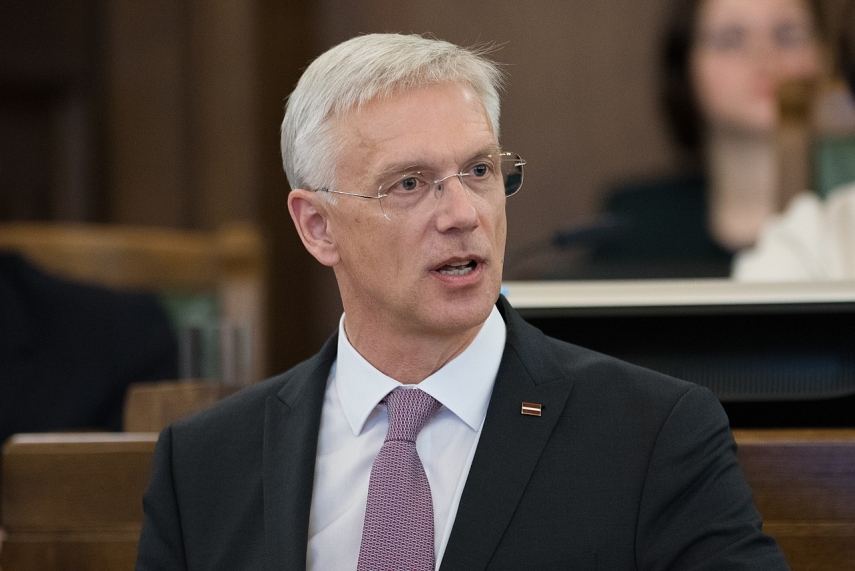 "The prime minister keeps in touch with the interior minister, supports the minister's proposal and will call on partners to also support it at today's coalition cooperation meeting," Karins' spokesman said.

The interior minister has asked ministers to decide on her proposal at the weekly government meeting this Tuesday, August 10, Sabajevs said.

If the government takes the decision on the state of emergency soon enough, the Saeima might vote on its approval already this week, Saeima Speaker Inara Murniece (National Alliance) told LETA.

The Saeima speaker indicated that a state of emergency takes effect as soon as it has been approved by the government. The parliament, meanwhile, can decide on approving or rejecting the government's decision.

If the government decides to declare the state of emergency, Murniece expects lawmakers to approve it. If the government forwards relevant documents to the Saeima on Tuesday or Wednesday morning, they will be sent to the Saeima Defense, Interior and Corruption Prevention Committee right away. Murniece hopes that the committee will process the documents quickly so that the Saeima can vote on the proposed state of emergency already before the end of this week.

As reported, in order to protect the external border of Latvia and the European Union from illegal migration, Interior Minister Marija Golubeva (For Development/For) has asked the government to declare a state of emergency at the Latvian-Belarusian border, as the Interior Ministry told LETA.

If the Cabinet of Ministers declares a state of emergency, the state of emergency will be in effect in Augsdaugava and Kraslava regions, where the State Border Guard will have more powers to return illegal immigrants who cross into Latvia to border checkpoints.

According to the Interior Ministry, the Lithuanian government has introduced a special border guard regime, as a result of which illegal migrants from Belarus have been increasingly often trying to cross into Latvia and Poland.

Golubeva will visit the Latvian-Belarusian border on Wednesday, August 11.

As reported, 160 people have been detained for illegally crossing the Latvian-Belarussian border during the past three days, LETA learned from the Interior Ministry.